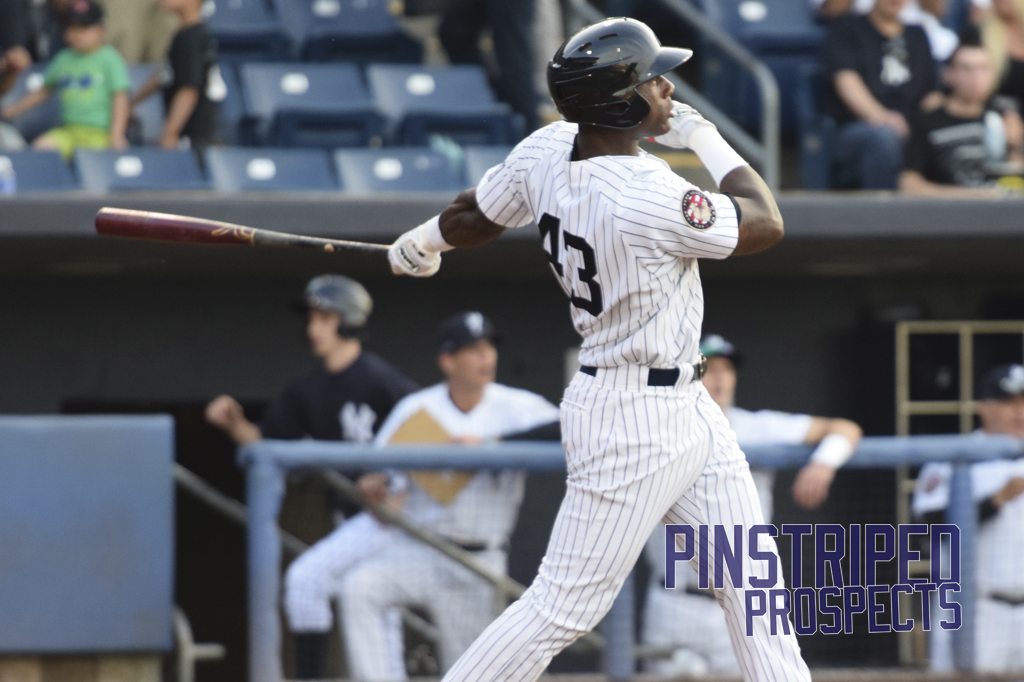 Jhalan Jackson went 3-for-4 with a double and his 5th home run of the season, but Staten Island fell 4-3 to Hudson Valley. (Robert M. Pimpsner)

In their final home game before the highly anticipated “Meet George RR Martin Night” on Saturday, the Staten Island Yankees, much like one of the many doomed souls in Martin’s Game of Thrones series, were dealt a heartbreaking loss on Thursday night, falling 4-3 to the Hudson Valley Renegades.

While the Yankees were assisted by the overnight losses of Brooklyn and Aberdeen (who was no hit by Tri-City) in the extremely tight McNamara division race, Hudson Valley sliced their lead to 1.5 games with the win. The two teams will do battle again on Friday night at Dutchess Stadium before concluding the three game set on Saturday night. If anything, the Baby Bombers are well traveled, as Friday will be their third different stadium visit in three days. The team return from a road trip to Vermont early on Thursday, which led the team to skip batting practice.

“This is the stuff people don’t realize,” said Osborn. “Travel is one of the hardest parts of minor league baseball. These guys go through a lot. It’s a testament to them and their work ethic. It’s part of it, part of learning on the job.”

Luis Cedeno (4-3) was charged with loss, his first since July 17. Hudson Valley torched him early, scoring their quartet of runs in the first two innings. Before Cedeno could record his first out, he gave up two singles (one that drove in a run), a walk and hit a batter. He would eventually settle down, allowing only two hits after the first couple of frames, but the Renegades damage was done. He would last 4 2/3 innings, giving up 5 hits, 4 runs (3 earned), walking two and striking out four. Despite the loss, Osborn praised Cedeno for settling down after the tough beginning.

“I was proud of (Cedeno),” Osborn said. “His fastball command was hit or miss, but after the second he threw 90 percent fastballs. (Pitching coach) Butch (Henry) told him to use his fastball, not the breaking ball. He got a feel for it and he cruised. He did a great job.”

“The bullpen came in and kept the game close,” Osborn said. “Unfortunately, we didn’t get off to a great start but they gave us a chance to win. It’s a major strength of our team.”

In the last ups, the Baby Bombers made things interesting. Jackson, capping off an eventful 3-for-4 day, crushed a pitch from Diego Castillo over the electronic scoreboard in right field. His 5th home run of the year made it 4-2. The rally continued with CF Junior Valera reaching on an error followed by a Bridges single that put the tying run on base. Valera scored on an RBI single by 1B Kevin Cornelius, but Castillo settled down to strike out the side to end the game.

“I told the guys, get good at-bats, we’re down three runs don’t give any at-bats away,” Osborn said. “We gave ourselves a chance to win, but we just didn’t come through with a big hit. It’s part of the game.”

Game Notes: The announced attendance at Richmond County Bank Ballpark was 1,386…regular leadoff hitter CF Jeff Hendrix got the day off. Zack Zehner took over…RF Cade Cotta drove in two runs for Hudson Valley…tonight was the final game for Yankees CEO Steve Violetta, who chose not to extend his contract with the team. Trenton Thunder general manager Will Smith will take over.