Jackson Takes Care of Business, RiverDogs Walk Off in Ninth 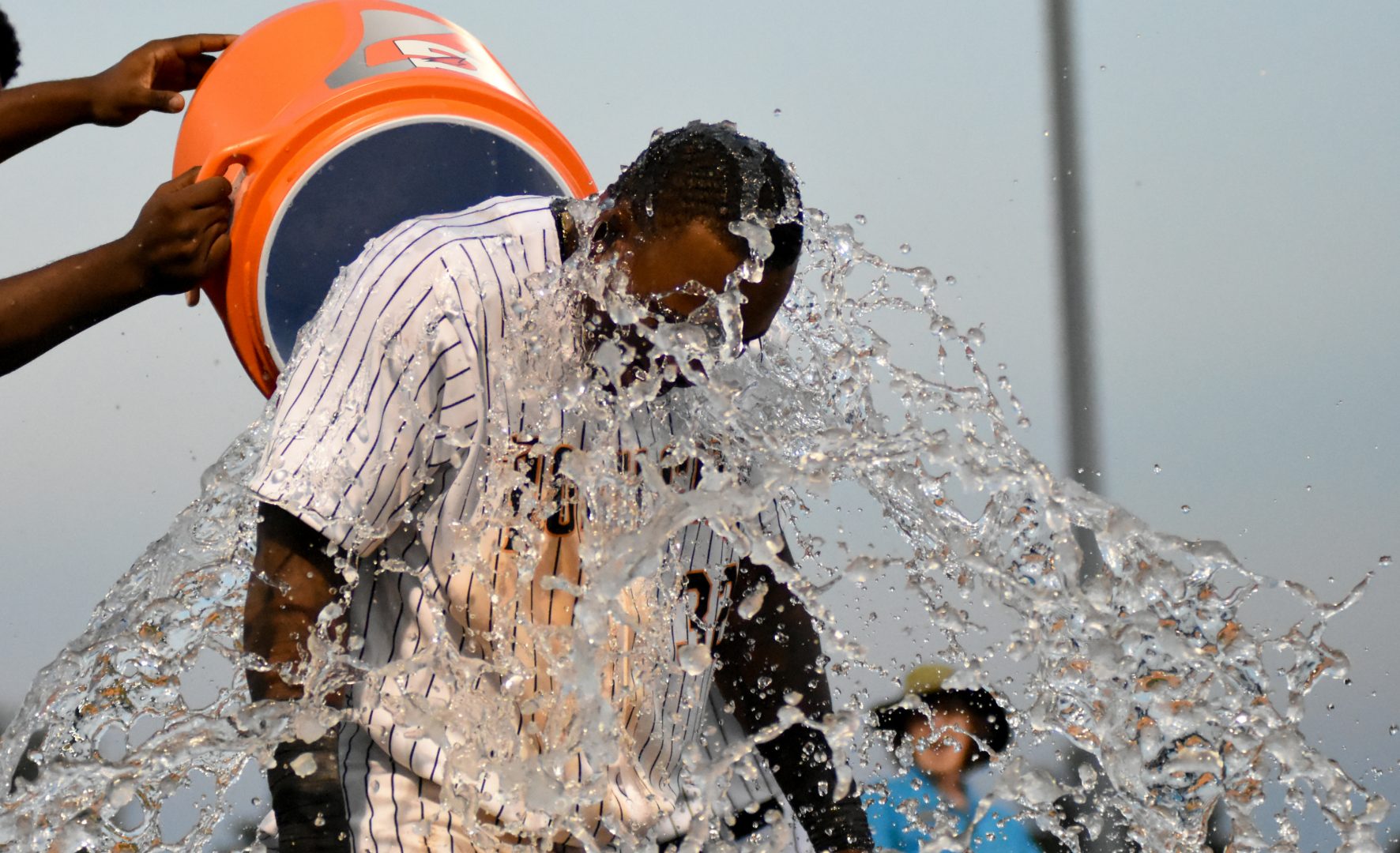 The RiverDogs celebrate by dowsing Jhalan Jackson with the water bucket after their walkoff win over the Greenjackets. (Jerry Coli)

CHARLESTON, SC – It’s almost a sure enough custom at Joseph P. Riley Jr., Park for the Charleston RiverDogs to win in walk off fashion.  Jhalan Jackson delivered the game-winning RBI single for the second night in a row, lifting the RiverDogs 5-4 over the Augusta GreenJackets in front of 5,631 on Sunday evening, the fifth walk off win for Charleston this season.

Jackson went 2-for-5 with the game winning RBI and stroked his third career walk off hit,  his second in two days, into the left field corner, driving in Jeff Hendrix who stood on second.  Augusta brought in Ryan Koziol (1-2) to pitch the ninth, when the GreenJackets reliever gave up three hits and a run to pick up his second loss of the season.

With one out in the bottom of the ninth, RiverDogs leadoff hitter Jeff Hendrix and shortstop Thairo Estrada got on with base hits.  After an Amburgey pop out, Jhalan Jackson brought more magic between the baselines at The Joe.

The RiverDogs (13-5) have now won four of their first five series to start the season and sit atop the Southern Division standings, two games up on Columbia and Greenville.

Augusta made the game interesting in the top of the eighth inning, scoring two runs off of reliever David Palladino (1-0), who gave up a two-run lead.  The towering right-hander relinquished two runs to the GreenJackets off of three hits and a walk, but picked up his first win of the season.

The RiverDogs got on top first, striking in the bottom of the second off of the struggling starter for Augusta, Mac Marshall.  After a leadoff walk, Angel Aguilar reached on a fielder’s choice and Connor Spencer reached second on a fielding error by the GreenJacket’s shortstop.  Drew Bridges then followed with the first RiverDog hit, driving Spencer home to make it 1-0.  Eduardo Navas was the next Charleston batter to step up to the plate, sending a sacrifice fly into center field, which scored Aguilar from third to put the RiverDogs up 2-0.

In the fifth inning Connor Spencer tacked on a no-doubt blast into Brittlebank Park for the RiverDogs, which soared well beyond the right field wall, pushing Charleston to a 4-2 lead.

In the bottom of the third Trey Amburgey reached on the error by Manuel Geraldo, and scored on an RBI single to right field from Spencer, pushing Charleston’s lead to three.

In the fifth, the GreenJackets brought the game within one after Jean Angomas doubled to lead it off, followed by a one out single up the middle by Geraldo cutting the Charleston lead to one at 3-2.

Augusta got back within two in the top of the fourth after getting a run off a Dylan Davis RBI single to centerfield.  Seth Harrison led the inning off with a standup double just past the outstretched glove of Kendall Coleman in left.

The Charleston RiverDogs hosted their second Holy City Sunday at Joseph P. Riley, Jr. Park along Kids Club Sunday, as the kids were able to chase Charlie around the bases after another RiverDogs walk off victory.

Charleston takes the show on the road traveling up north to take on the Northern Division Lakewood Blueclaws for a three game series from April 25-27, followed by a four-game stint with the Delmarva Shorebirds from April 28-May 2. The RiverDogs will return back home for a seven-game homestand against the West Virginia Power (May 4-6) and the Hickory Crawdads (May 7-10).