Jarrell: A Tale of Two Relievers: Assessing The New-Look Bullpen 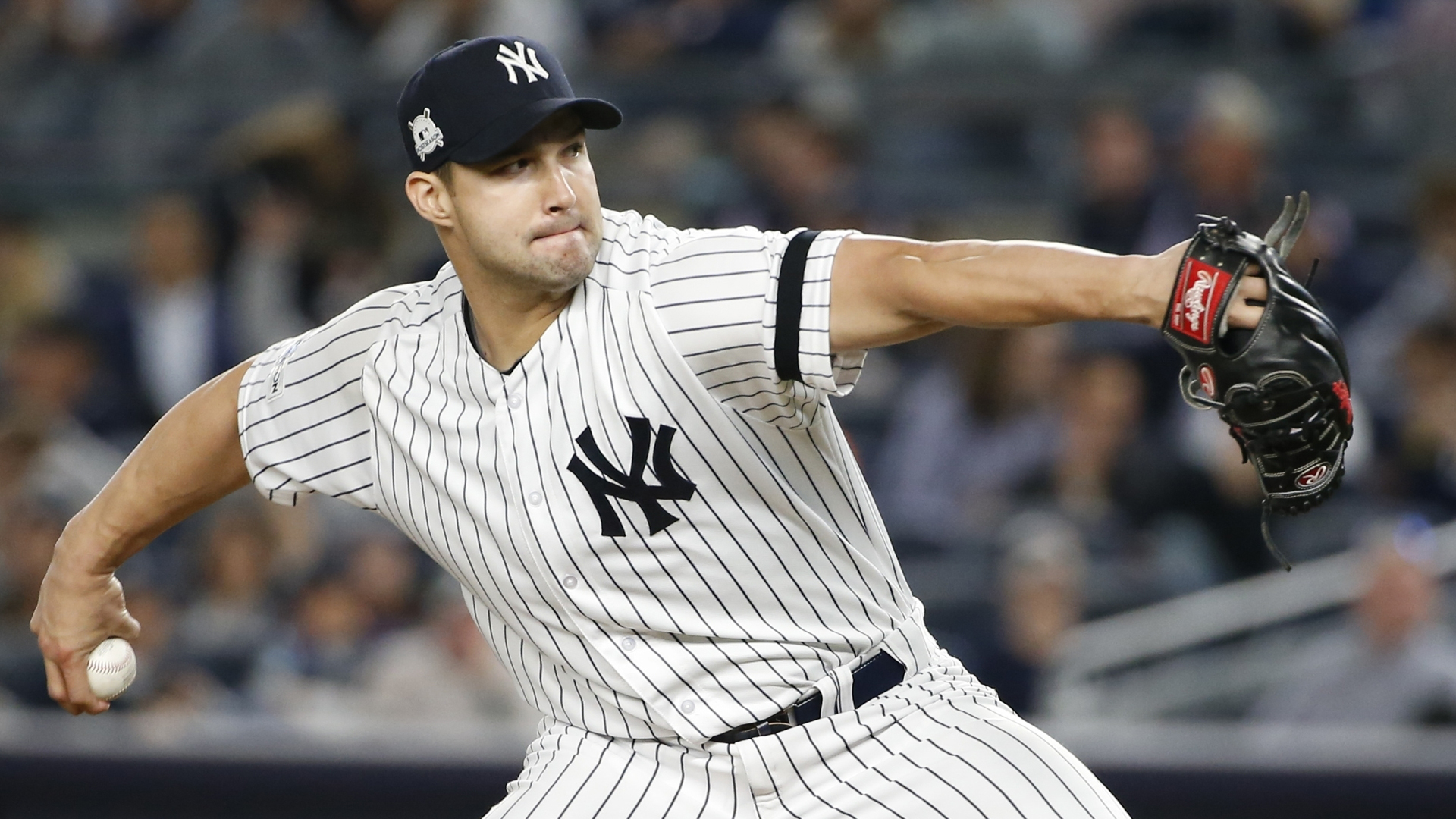 In this season of surprise performances and unexpected contributors, we shouldn’t forget to appreciate the aspects of the Yankees that have come together exactly as promised. The bullpen, a cornerstone of the team’s 100-win 2018 season, was projected to be an area of strength again this year, and it hasn’t disappointed: its staff-wide 3.3 WAR outpaces the second-place Rays and Reds by a comfortable 0.6 wins, and its 28.1 strikeout percentage also ranks first in baseball.

The pen’s composition, though, is fairly different than it was a year ago. Aroldis Chapman remains the everyday closer, and Zack Britton has returned everything but the spelling of his first name, but the other late-inning options have changed. David Robertson is gone, Chad Green was briefly demoted to Triple-A after a tough start, and Dellin Betances is still awaiting his first appearance. Into their places have stepped free-agent acquisition Adam Ottavino and 2017 late-season fireman Tommy Kahnle, the last remaining piece of the trade that also brought Todd Frazier and Robertson to New York and a casualty of diminished velocity last season which resulted in an extended stint with Scranton. In essence, Ottavino and Kahnle have been asked to be Robertson and Betances over the season’s first two months. Let’s take a look at how they’ve fared in answering that call. 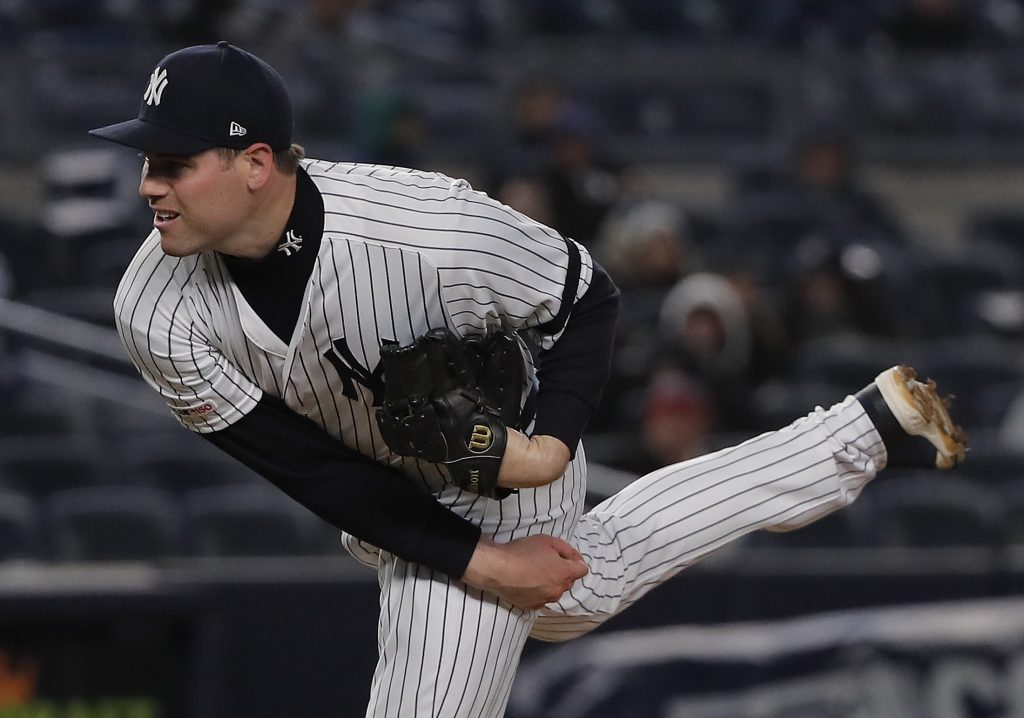 The short answer: extremely well! Ottavino’s ERA- sits at a minuscule 33, and Kahnle’s at an equally elite 38. Ottavino is striking out hitters at a 31 percent clip to Kahnle’s 36 percent, both thoroughly healthy figures. Statcast expected numbers love both pitchers. Ottavino’s expected batting average, slugging percentage, and wOBA surface in the 99th, 98th, and 81st percentiles, respectively, while Kahnle’s listed in the 97th, 96th, and 99th. With Chapman and Britton enjoying equally strong seasons, one wonders whether any Yankees opponent will have a prayer against a late-inning deficit, especially once Betances enters the fray as well.

Kahnle and Ottavino will continue to form the core of a lights-out bullpen. For a few reasons, I’m more convinced by Kahnle’s resume thus far. That’s not to say that Ottavino is headed for a nosedive or anything. He’s been very good. But I do believe Ottavino has more adjustments to make to keep his ERA under 2 than Kahnle does. I’ll compare the two more closely to explain why.

Kahnle’s four-seam fastball, his bread and butter pitch, sat in rarefied air during his breakout 2017. Per Pitch Info, his heater averaged 98.1 miles per hour that season, ninth among all qualified relievers in the game and somehow just third on the team behind Chapman and Betances. Kahnle pounded the zone at a 56.8 percent clip with his fastball, setting up a solid plus changeup on which he induced a swinging strike rate of nearly 26 percent and a chase rate north of 40 percent. Things went south in a hurry last year when Kahnle lost that velocity and command. His fastball shed nearly three miles per hour from its 2017 average and his zone rate dropped ten percentage points, rendering his putaway changeup ineffective as its chase and whiff rates both declined. Kahnle descended from potential All-Star to Scranton shuttle rider in just a few months.

This year, those troubling trends have reversed. The fastball velocity hasn’t returned to its lofty 2017 heights, but it’s back to nearly 97, and the zone rate is once again north of 50. Kahnle is inducing nearly 60 percent ground balls and giving up hard contact less than 20 percent of the time. With his wipeout change working once again (lefties hitting 1-for-23 with 15 strikeouts, h/t Katie Sharp) and his overall swinging strike rate matching the figures he posted at his peak, it’s safe to say that Kahnle has awakened into the pitcher the Yankees hoped they were getting when they traded top prospects for him two summers ago.

Ottavino produced a Jekyll-and-Hyde two-season stretch with Colorado before signing this past offseason. In 2017, he produced a FIP- of 112 and a grisly strikeout-to-walk ratio of 1.62. Last year, he halved the first number and doubled the second. The Yankees obviously hoped they were getting the latter version. It seems they’ve gotten a little of both. Ottavino is inducing very favorable contact, with just a single barrel surrendered all season, and his expected numbers are matching his knockout 2018. Command and control, however, are still an issue – Ottavino’s strikeout rate is down and his walk rate is north of 18 percent (first percentile, worse than 99 percent of pitchers). He’s getting lucky to get out of some tough situations with a .191 BABIP and a preposterous 95 percent strand rate, but it’s easy to see why there’s a considerable gap between his elite ERA and far more average FIP.

Some more specific observations: Ottavino’s slider isn’t the same pitch it was last year. He’s throwing it in the zone less often than last year but his chase rate has dropped precipitously. That’s not a good combination. Hitters are also making contact when they chase more often, meaning they’re fouling more pitches off, forcing longer at-bats, and driving up counts. He’s not hanging too many, which is good and reflected in the .134 xSLG against, but he’s not getting the chases either, which is bad. And Ottavino’s cutter, with which he almost completely replaced his four-seamer after his disastrous 2017, has been flat-out hittable thus far (.299 xBA against, .659 xSLG against). The two homers he’s given up this year, coincidentally on back-to-back pitches in the same inning on April 21, came off cutters that sat middle-middle. The sample is 76 pitches, but an average exit velocity of 96.2 tells you everything you need to know. A slider that’s not fooling like it used to plus a cutter that’s getting crushed equals a reliever that has some improving to do.

This take may not be entirely fair. After all, Ottavino hasn’t given up a run since his April implosion against Kansas City, and the variety in his stuff can keep hitters off balance. All things considered, I think Kahnle’s renaissance is for real and I’m unsure Ottavino can keep throwing up zeroes like he has lately. We’re talking a matter of degrees, though – both pitchers are great and both are going to drive the success of the Yankees super-bullpen. And in this season of nearly complete upheaval, it might be a good idea to simply appreciate the one area of greatness that caught nobody by surprise.