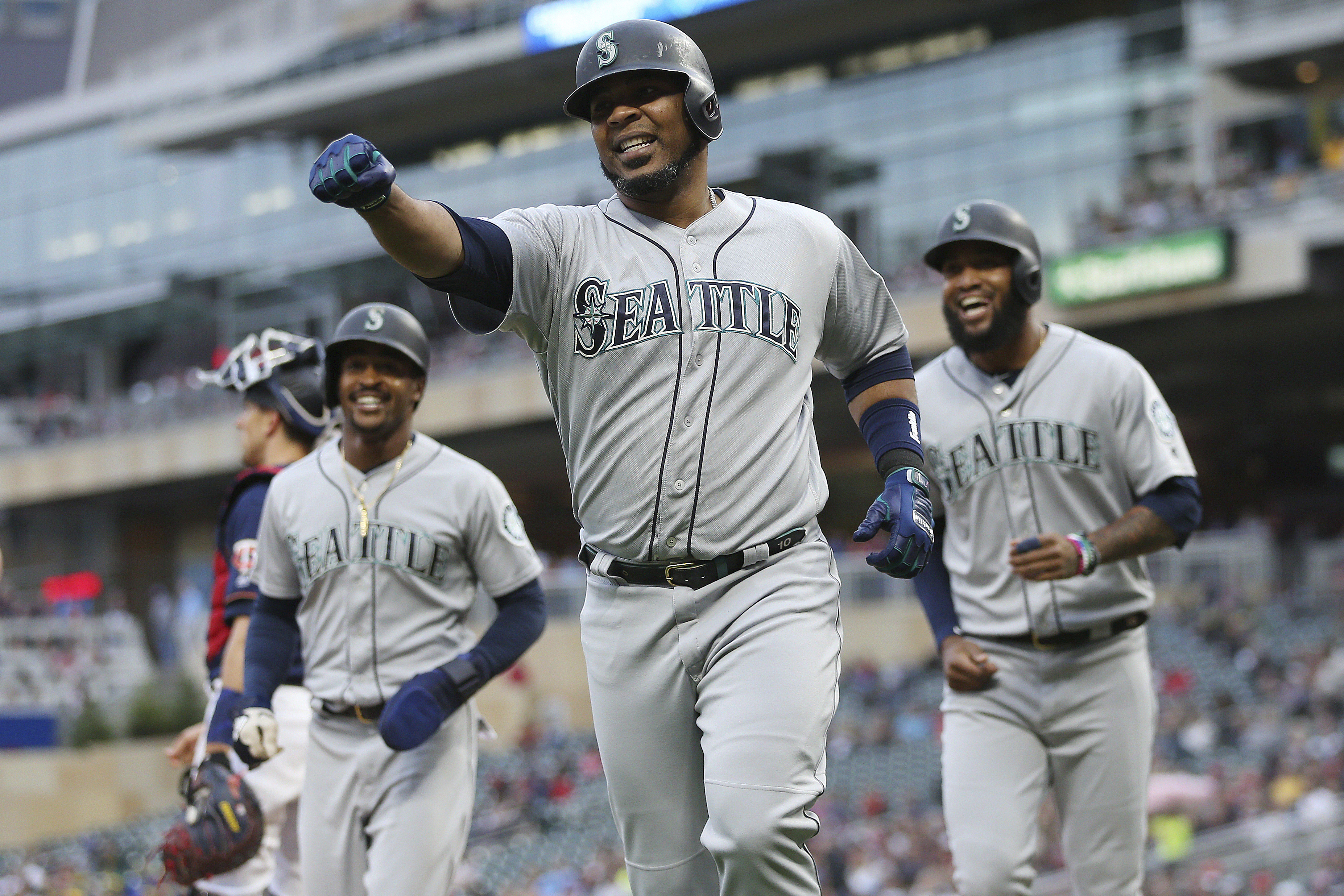 Seattle Mariners' Edwin Encarnacion runs back to the dugout in celebration after hitting a home run against the Minnesota Twins during the second inning of a baseball game Tuesday, June 11, 2019, in Minneapolis. Minnesota won 6-5. (AP Photo/Stacy Bengs)

Last week I chronicled an acquisition that the Yankees didn’t make. This week, let’s take a look at a move they did – and it’s an extraordinary one. The news broke late Saturday that the team obtained slugger Edwin Encarnación from Seattle in exchange for teenage pitching prospect Juan Then and cash considerations. Encarnación currently leads the American League in home runs, and come Monday night’s game against Tampa Bay, the swashbuckling captain and his invisible parrot will be rounding the bases at Yankee Stadium wearing the home pinstripes.

Folks, Brian Cashman has done it again. This is an absolute coup of a trade in every way imaginable. The Yankees acquired Then from these very same Mariners in 2017 for the price of reliever Nick Rumbelow, who was released from their Triple-A affiliate earlier this week. In 25.1 innings with Tacoma this season, Rumbelow pitched to an ERA of 8.17, and he has a career mark of 5.97 in the majors. Then is now on his way back to his first organization with Encarnación headed the other way. In essence, Cashman traded Rumbelow for a guy who’s hit 400 career homers and doesn’t show much sign of slowing down. I mean, come on. And as for Then, teenage pitching prospects with live arms are a dime a dozen these days. That’s no knock on Then, but if someone like him is the price for Edwin Encarnación? It’s a total no-brainer.

Let’s take a closer look at the Yankees’ new designated hitter. Sure, he’s 36 years old. But in many ways, he’s the same player he’s been for years. For starters, there are the 21 homers, which as I noted is tops in the league this season. But this is no luck-inflated hot streak: Encarnación is squaring the ball up just like he has his entire career. So far in 2019, 8.7 percent of Encarnación’s plate appearances have ended in a barrel, which is 45th among 358 qualified hitters, per Baseball Savant leaderboards. His overall 13.2 barrel percentage is in fact the highest he’s posted during the Statcast era, dating back to 2015. He’s recorded hard-hit figures and expected numbers in line with his career marks, coming down in the 90th percentile for expected wOBA and the 86th for expected slugging percentage. He’s still not striking out much for a power hitter and posting sky-high walk rates (93rd percentile for the year). He’s even cut down on grounders, with a 31 percent rate that represents the best mark of his career. With all this quality contact, his .220 BABIP, which is the lowest he’s ever posted, is likely to rise and his offensive production along with it. He’s already 39 percent better than league average by the wRC+ metric. The guy’s probably going to hit fifth in a full-strength Yankees lineup. Mercy.

is a hell of an offense

Just look at that. And yet, there have still been complaints. A quick look through Twitter yesterday night revealed two camps of trolls. In one corner, we have the “But can he pitch?” crowd. In the other, there’s the “Another power-hitting righty?” bunch. Both are ridiculous, for what seem like obvious reasons, but let’s go through them anyway.

The “Can he pitch?” argument is a hilarious red herring. No, Twitter, of course Encarnación can’t pitch. Why does that matter? It’s not like the Yankees took on a ton of salary and are now weathering a huge luxury tax hit – the Rays are paying him more this season than the Yankees are. And it’s not like they emptied the farm system and sent high-ranking prospects over to Seattle that they might have used to acquire a pitcher. They sent a 19-year-old in rookie ball! Nothing about this move precludes the possibility of the Yankees trading for a starter or three, especially with six weeks to go until the deadline. Encarnación makes the team better today without sacrificing anything significant or the opportunity to bolster a true weakness later. This was a great move, and the front office knows as well as we do that the team needs pitching. What does one have to do with the other?

The other argument is a little more sensible, I suppose. The Yankees don’t lack for power hitting, and basically all of it is right-handed. It’s not a bad idea to have some balance. But Encarnación’s career splits should assuage some of those concerns. He’s actually slugging higher against righties than lefties, and the gap between his wRC+ against lefties and righties is just 6 points (131 against lefties, 125 against righties).

And it’s true that once Aaron Judge and Giancarlo Stanton return to the fray this week, the Yankees will have a logjam. Judge, Stanton, and Aaron Hicks are going to play nearly every day. Brett Gardner will spell them. Between those guys, Luke Voit, and the carousel elsewhere in the infield, there are plenty of designated hitter candidates. Now, the team has a player that will be doing that most days. This comes down to the fact that there probably isn’t room for Clint Frazier in a full-strength lineup, which is something to consider – Frazier’s been excellent offensively this season. Ultimately, though, Frazier can’t play defense and has minor league options remaining. He’s a depth piece or a possible trade candidate, and isn’t remotely a reason to pass up a deal for Encarnación.

As badly as the Yankees missed last week with Dallas Keuchel, that’s how fully they succeeded with Encarnación. He is a player you go get if available at the right price, roster crunch be damned. Cashman can and will snag the pitcher the team needs when the time comes. Until then, let’s all sit back and watch this video-game lineup crush baseballs to the moon. This is going to be fun.

In this article:Edwin Encarnación, Juan Then, Mariners, yankees