Jarrell: Get In The Zone - Paxton's Patience-Testing Problems 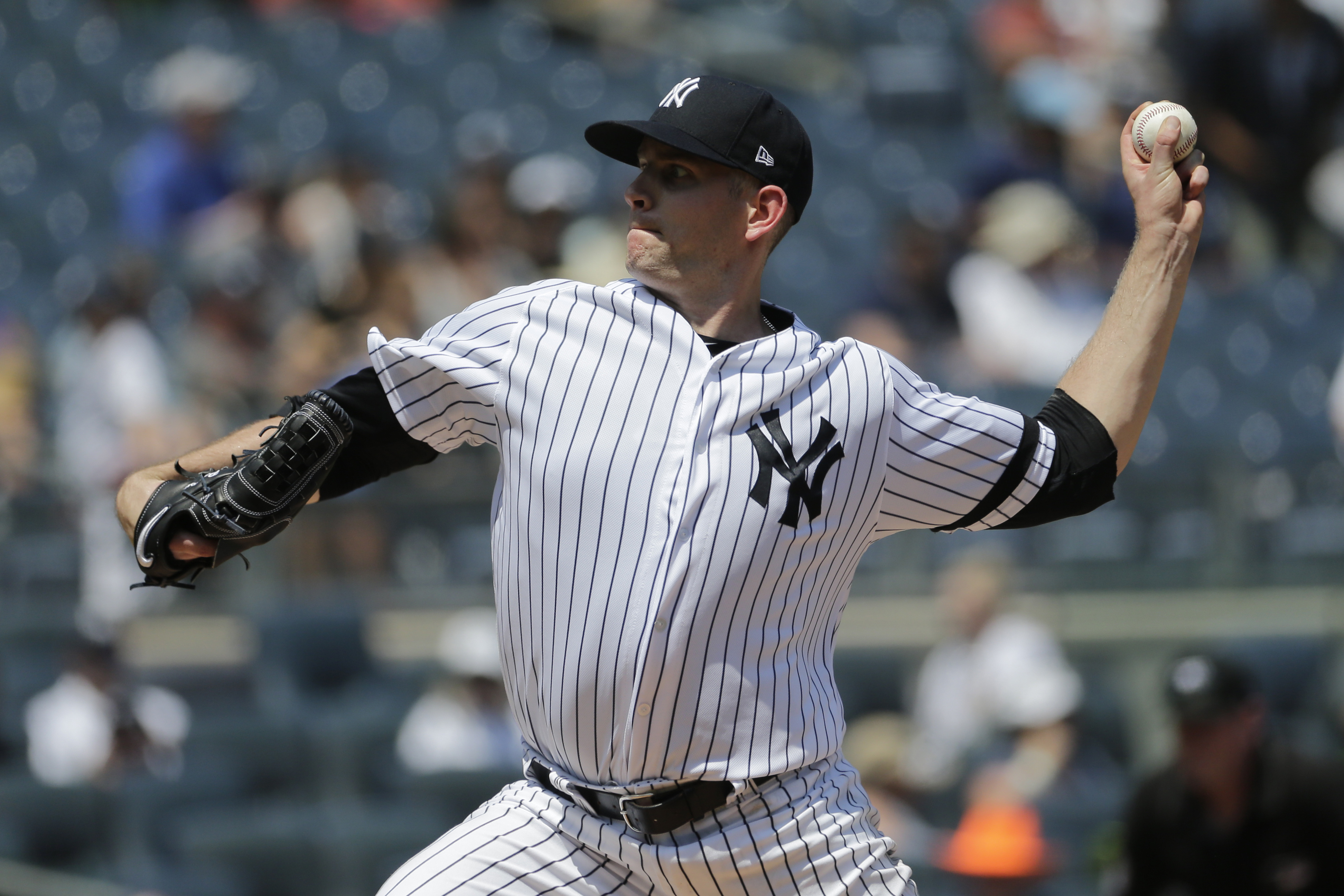 Yankee fans are lucky. While there isn’t a single contender in baseball that doesn’t have some work to do, the Bronx Bombers and their followers have the privilege of visualizing everything through the prism of a double-digit loss column lead in the divisional race. The season’s first half has been good to us, and as we enter the stretch run, there’s comfort in knowing that the team could withstand a fairly significant run of mediocre baseball and still occupy an enviable position.

But not everything has gone according to plan. Looking to shore up a shallow rotation, the Yankees shipped top prospect Justus Sheffield off to Seattle in exchange for James Paxton, a hard-throwing lefty who was pegged not just as an upgrade, but as a bonafide second ace alongside Luis Severino. 100 games into the season, things have not worked out that way. Paxton hasn’t been awful, pitching to an ERA- of 90 through 17 starts, but he certainly hasn’t amounted to anything resembling an ace. Opposing hitters are batting .270 against him, his walk rate is the highest mark he’s posted since 2016, and he’s allowed 13 home runs in just 85.2 innings. 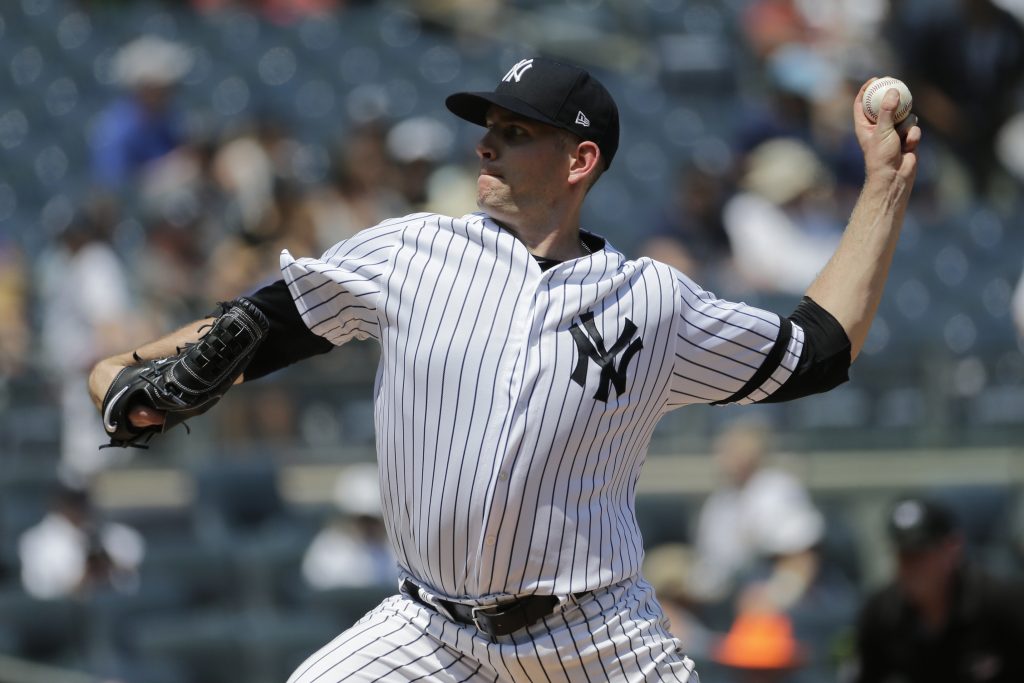 So what’s gone wrong? Is Paxton another Sonny Gray, as some on social media would have us believe? The short answer is no because, in a lot of ways, Paxton has been the same pitcher this year that he was the last two. And in the last two, he was very good to borderline elite. But there are some key differences, so let’s take a closer look at his profile and attempt to draw some conclusions.

The first thing that’s critical to understand about Paxton is that he gets his best results when he misses bats. Much like his rotation colleague Masahiro Tanaka, Paxton tends to give up loud contact. In each of the four full seasons for which Statcast data is available, Paxton ended up in the 48th percentile or lower for average exit velocity, meaning the speed of the batted balls he surrendered was worse than average. And for three of those four, he was in the ninth or below. But who cares about hard contact if you’re hardly giving up contact, to begin with? Paxton’s K rate percentiles each year since 2016: 65th, 85th, 94th, 83rd. His swinging strike percentage ranks among all starters in the same time span: 16th, 13th, 8th, 15th. (Full disclosure, I had to fool around with the innings limit in order to get Paxton on these lists, because he’s missed time with injuries. For 2016-2018, 120 innings was my minimum. For this year, it was 80.)

But the way in which Paxton misses bats is very different from someone like Tanaka. Armed with two devastating putaway pitches in his slider and splitter, Tanaka succeeds when he gets hitters to chase out of the zone. The overall percentage of pitches he throws inside the strike zone, therefore, is rather low. He’s 25th from the bottom in that statistic this season. The same sort of concept applies to the bottom two pitchers on the list, Luis Castillo and Kyle Gibson. Castillo’s changeup and Gibson’s slider are both engineered to induce chases and are more frequently than not thrown outside the zone.

Paxton, on the other hand, doesn’t have a fading changeup, a hard-breaking slider, or a diving splitter. He throws his four-seam fastball nearly 65 percent of the time (for comparison’s sake: Castillo 31 percent, Gibson 18 percent, Tanaka 28 percent), and he mixes in a cutter and curve that both move less than comparable pitches across the league. The results are exactly what you’d expect – Paxton pounds the zone. He posted a 49 percent zone rate in 2017, seventh-highest in the league, and a 48 percent mark last year, fourth in baseball. Though he strays outside the strike zone less than other pitchers who feature more diverse secondary offerings, he’s still able to garner a high number of whiffs. He’s at his best when he’s painting the edges with his four-seam fastball and turning to his cutter and curve to mix his velocity and catch hitters guessing. Here’s a heat map of his four-seamers from last year. 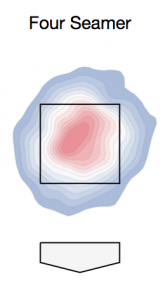 This year, Paxton’s just not executing that formula. He’s still generating the whiffs, but he’s also allowing more contact and more walks, and his pitch counts are shortening his outings. He’s lasted more than six innings just once – his April 16 masterpiece against Boston – and has walked at least one hitter in every outing except July 7 at the Rays. And the most noticeable difference is his declining zone rate. It’s affected all of his pitches to an extent: 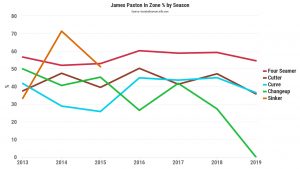 Paxton’s been throwing more cutters than curveballs this season, reversing his usage from last season and the year prior. And he’s throwing more of them out of the strike zone, which has rendered the cutter far less effective (.181 wOBA in 2018, .284 this year). His heater, too, hasn’t hit the zone as often. While we don’t have the ability at this point to measure how often a pitcher hits the spot his catcher gives him, heat maps can give us a general idea of how well he’s controlling his offerings. Compare Paxton’s four-seamer heat map from this season to the one from 2018. 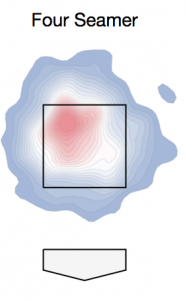 The amorphous blob looks quite different from 2018’s shapely array. Paxton is missing more often and having more trouble locating the pitch on the corners. And as he’s lost the zone, particularly with his four-seamer and cutter, he’s become much less effective. His walk rate is up, and though he’s still getting his Ks, the overall outcomes aren’t what was desired and expected. Numbers speak louder than words, so here’s the argument in summary: 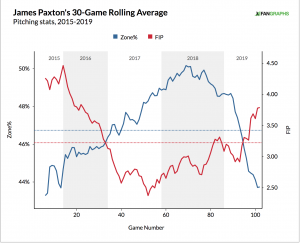 That’s pretty convincing. To regain his lost dominance, Paxton has to get back to the formula that’s worked for him. He’s not Tanaka, Gibson, or Castillo – when he works in the zone, he gets results. As far as reasons for the changes, I can’t give a definitive answer. It could be the knee injury that nagged him earlier this season, it could be the new, flat-seams ball that’s prompted him to throw his curve less and his cutter more, or it could be something I’m not seeing or thinking of because I’m not an expert. Paxton’s raw stuff is still there, so there’s no reason to think he can’t make adjustments and be the guy he was acquired to be. With a hefty cushion in the AL East, the Yankees can thankfully afford to let him figure it out.