I’ll admit it, this one is personal. My favorite moment over eighteen years of watching Yankees baseball isn’t Boone’s home run. It isn’t Jeter’s 3000th, or Mo’s 602nd, or the three-grand-slam game, or the Ibañez walk-off. It isn’t even the ’09 championship. It’s this.

Maybe it’s because I was there that night – I was sitting down the first base line at Fenway when Gary Sánchez silenced the chants of “Yankees Suck” by crushing a Junichi Tazawa two-seamer over the triangle for his first big league homer. Maybe it’s because it came as part of a 2016 trade deadline and surprising late-summer surge that gave us an inkling of what was to come in a brand-new age of Bronx baseball. Whatever the reason, those August nights full of Sánchez dingers were probably the most excited I’ve ever been as a Yankee fan and cemented his place as one of my favorite players to don the pinstripes.

His explosion onto the scene was as enthralling as his 2018 campaign was horribly disappointing. Last year, Sánchez struggled through a season in which he dealt with injuries and terrible numbers while constantly dogged by questions about his character and dedication. He was labeled fat, lazy, complacent, and disinterested. Many writers and commentators wanted him gone. It was a painful time to be a Sánchez fan, and there were seemingly more Austin Romine stans plying the waters of Yankees Twitter than there were actual highlights from the most immediately successful of the Baby Bombers.

The story has been very different so far in 2019. Sánchez hasn’t just bounced back to his 2016-2017 form – he’s somehow vastly exceeding it. He’s been one of the best offensive catchers in the game over the season’s first month, posting a slash line of .250/.330/.630 for a 151 wRC+ which ranks third to Willson Contreras and Robinson Chirinos among catchers with at least 100 plate appearances. Incredibly, he’s also been one of the unluckiest. The numbers paint an awe-inspiring portrait of a hitter who’s found another gear, and may only be getting started.

Let’s be frank about the reality of what we’ve witnessed so far in 2019: Gary is breaking Statcast. He’s third in baseball in average exit velocity at 95.1 MPH. He’s second in average distance on batted balls at 233 feet. He’s 13th in hard-hit percentage at 53.1 percent, just two-tenths of a percentage point behind the scalding-hot Cody Bellinger. And he’s first in percentage of plate appearances that end in a barrel by a whopping 1.7 points over second-place Jason Castro. Sánchez is making earthquake-level contact nearly every time he squares up the ball, and the results have been grand, as he’s cracked 11 long balls in just 25 games so far.

What’s changed from last year? Much ado was made of Gary’s .197 BABIP during 2018, a shockingly low number that was probably due in part to bad luck, but was also fueled by a drop in line drive percentage (24.5 in 2017 to 17.7 last year, per Statcast) and a corresponding rise in popup percentage (9.6 to 12.6). The popups have stuck around so far this season, but the line drive rate has recovered a bit. Sánchez’s biggest turnaround, however, has to do with ground balls. Even during his barnstorming 2016 breakout, Sánchez was hitting almost half of his batted balls on the ground, and last year, the rate sat near 43 percent. This year, just one out of every five batted balls are grounders. Sánchez hasn’t just been scorching the ball – he’s been elevating it, too. That’s a deadly combination. For a visual on this renaissance, consult the Statcast launch-angle charts from last season compared with this one. Here’s 2018: 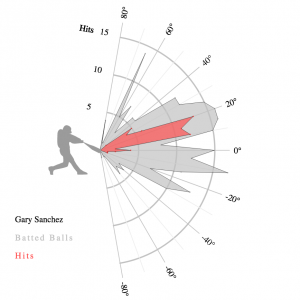 Note the massive gray block below zero degrees, signifying a high level of grounders, and the long popup needle above 60 degrees. Now take a look at the same chart for this season: 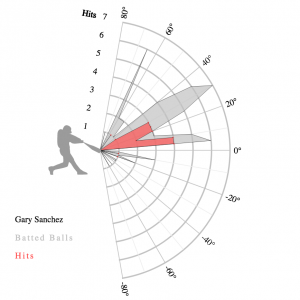 It’s a smaller sample size, but it shows the trends. There’s almost no shading below zero. The popup needle has remained, but notice how the bulk of contact falls between the 20 and 40 degree range. You’re looking at a hitter who’s locked in and whose huge numbers are no fluke.

In fact, the situation may be the opposite. Sánchez’s figures to this point are understating how good he’s been. No, really! According to Statcast expected statistics, which estimate a batter’s numbers based on quality of contact, Sánchez has been one of baseball’s unluckiest hitters so far this season. He’s hitting .250 against an xBA of .294, which is fairly unlucky, but the more sophisticated hitting metrics do a better job of illustrating this. Sánchez boasts an impressive .630 slugging percentage, but Statcast estimates he should be slugging .768. That’s a difference of -.138, seventh-worst in the game. The same measure for wOBA, an even more nuanced statistic, shows a difference of -.066 between actual (.401) and expected (.467), 11th-worst among all hitters. Sánchez’s overall xwOBA ranks third to Bellinger and Castro. We might see a repeat of that first glorious August, or we might see something far greater than that. Sánchez is performing better now than he was then.

While we’re definitely seeing who Sánchez really is right now, that’s not to say there’s no room for improvement. Anyone who watches him routinely will notice that he often gets caught out on his front foot chasing breaking balls, against which he’s posted a whiff rate of 45 percent this year that’s fueling a 27.2 percent K rate. And those pesky popups need to disappear at some point. But there’s no doubt Sánchez looks much more balanced on the whole, and the fact that he’s elevating basically all of his contact, most of it powerfully, shows he’s making the adjustments he needed to make after last season. To the dismay of the skeptical pundits and the Romine stans, and to the great delight of those like me that fell in love with a baby-faced young catcher in that shining summer of 2016, Sánchez, as we knew him, has returned, and hopefully for good this time.