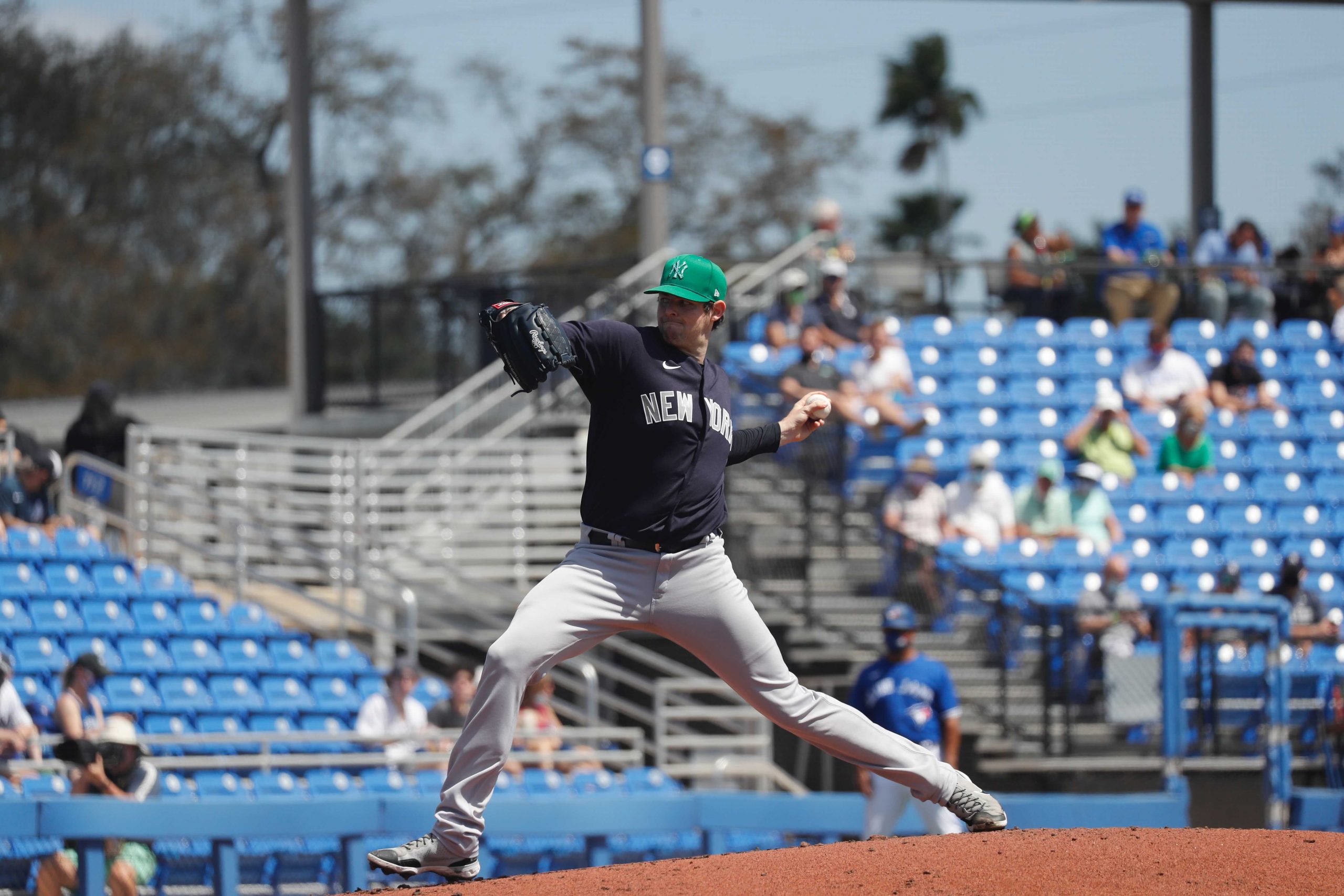 It may only be spring training and the games do not count, but the New York Yankees continued their winning ways in the Grapefruit League on Wednesday. In Dunedin, Florida, the trio of Jordan Montgomery, Jhoulys Chacin, and Lucas Luetge combined for a 4-hit shoutout in New York’s 1-0 win over the Toronto Blue Jays.The Yankees improved their record to 12-4-1 on the spring with the win.

Pitching has been the major storyline for the Yankees this spring as they have now allowed two runs or fewer in four of their last six games.

The Yankees have a day off Thursday before they go under the lights in Tampa on Friday night to take on the Philadelphia Phillies at 6:35 p.m ET. Ivan Nova gets the start for Philadelphia with no starter yet to be determined for the Yankees.

Let’s take a look at some of the takeaways from yesterday’s game that included DJ LeMahieu getting a start at third base:

Outside of a rough first inning in his first spring start, Jordan Montgomery has been very impressive so far. In the three starts he has made, the left-hander has a 0.90 ERA and has 7 strikeouts to 3 walks in 10 innings of work while allowing only one run.

That success continued on Wednesday on Montgomery threw five hitless innings, struck out four, and walked one on 66 pitches (42 strikes). What stood out the most about his four strikeouts were that they were all of the swinging variety.

On the afternoon, Montgomery’s fastball was between 93 and 95 miles-per-hour and three of his four strikeouts came on off-speed pitches (two of them were curveballs blocked in the dirt). To add to the strikeouts, Montgomery also got seven groundball outs.

While fans should not expect Montgomery to have high strikeout totals, he is getting the sinker down in the zone and mixing in the offspeed to put away hitters in an economical manner. That is not a bad formula for success in the regular season.

Stanton and Judge The Lone Offense

While the Yankees managed just five hits with a lineup that is similar to one fans can see during the regular season, the two power bats were able to generate offense in a different way.

In the top of the fifth, Aaron Judge worked a good at-bat against Tommy Milone and drew a leadoff walk. Then, Aaron Hicks was able to reach second base on a fielder’s choice and an error by Cavan Biggio. Judge would go to third base on the plate and later score on a Gleyber Torres groundout. The video of the groundout is courtesy of Max Goodman over at Sports Illustrated

So, even on days when Judge and Stanton aren’t crushing the balls out of the ballpark, that does not mean they can’t generate offense In other ways such as screaming line drives for singles or doubles or drawing a walk that can lead to the game’s only run.

Every spring, there is always one or two non-roster invitees that fans get behind because of the good impression they are making. This year, one of those players is Lucas Luetge. On a recent YES broadcast, Aaron Boone did mention that the Yankees have been trying to get Luetge in the organization before this season and the right-hander is showing why they wanted him.

Luetge was able to get the save on Wednesday and he got some help from the defense. Richard Urena led off the game with a single, but Socrates Brito made a good throw to second and Oswald Peraza applied the tag for the first out.

Then, Luetge threw four sliders in a row and eventually got Logan Warmoth swinging and got Tyler White to chase a breaking ball that ultimately ended the game. With those two strikeouts, Luetge now has 13 on the spring season. Those 13 K’s are tied with Domingo German for the most on the team.

In his last major league season with the Mariners in 2015, the right-hander used his slider and his curveball the same amount of the time (18.2% according to FanGraphs). If that slider can continue to be successful to help counter his fastball that gets to about 89-90 mph.

There aren’t many spots up for grabs in the Yankees bullpen. However, even if Luetge doesn’t make the Opening Day roster, he at least has put himself in a good position to eventually get called up if begins the 2021 season at Triple-A Scranton Wilkes-Barre.