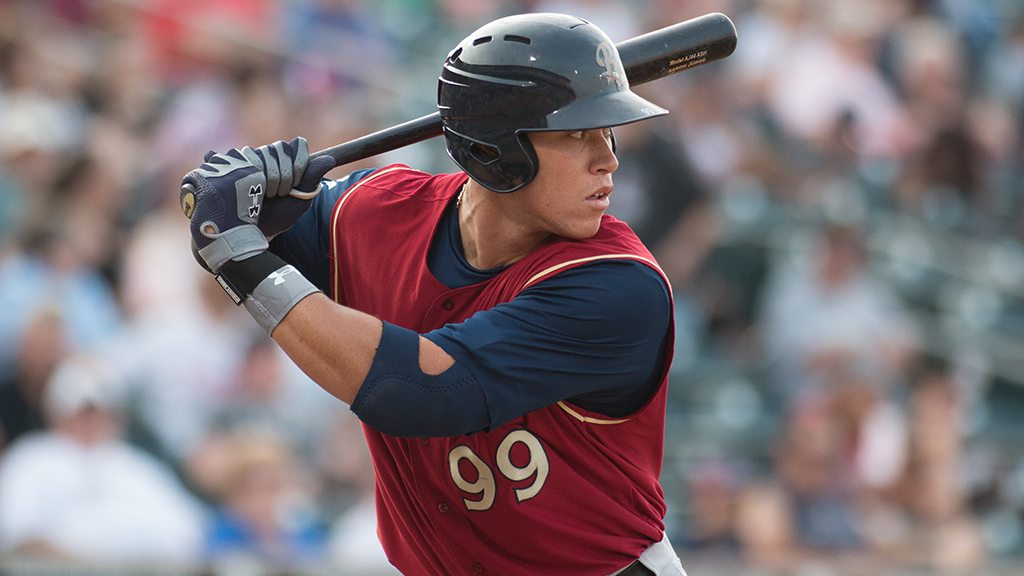 Aaron Judge earned a mid-season call up to the Scranton/Wilkes-Barre RailRiders in 2015. (Cheryl Pursell)

ALLENTOWN, Pa. –  The scoring woes normally suffered at home have shifted to the road as the Scranton/Wilkes-Barre RailRiders (Triple-A/New York Yankees) fell to the Lehigh Valley IronPigs (Philadelphia Phillies) in Monday night’s series opener, 8-1. SWB (43-35) has lost a season-high-tying four in a row.

Aaron Judge delivered the RailRiders’ only extra-base hit, their only knock with a man in scoring position and their only run in one fell ninth-inning swoop. The prospect outfielder lined a one-out double to right in the ninth that scored Ali Castillo from second base.

Cord Phelps had the biggest day at the plate with two hits, three RBIs and a walk for the IronPigs (31-48).

The RailRiders return to PNC Field for a six-day, seven-game homestand starting on the Fourth of July with a 7:05 p.m. game against the Buffalo Bisons (Toronto Blue Jays). Fans 18 and over will receive a voucher for a scratch-off ticket courtesy of the PA Lottery which will also present a post-game fireworks extravaganza. For more information please call (570) 969-BALL (2255) or visit swbrailriders.com.

Austin Romine extended the team’s longest hitting streak of the season to 15 games with his second-inning single.

The RailRiders have not scored in 34 of their last 37 innings.

The IronPigs left seven men on base and went 6-for-15 with runners in scoring position. The RailRiders stranded 12 men on the bases and went 1-for-9 with men at second and/or third.

The RailRiders have been outscored 28-5 during their four-game slide. The team’s only other four-game losing streak this season came from April 13-16 when the RailRiders started the season 2-6.

Seven of the RailRiders’ eight hits were singles.  Lehigh Valley smashed five doubles among its 12 hits.

Rob Refsnyder was hit by a pitch for the team-high sixth time. Since moving to the clean-up position, he is 3-for-6 with two walks.