It was a fun Final Four in Yankees Prospect Madness and the championship matchup is now set. Beginning on Thursday, you will be able to vote for 3 days as the matchup will be current outfielder Aaron Judge against the current catcher of the Yankees, Gary Sanchez. By the end of the weekend, we will have a champion to crown.

Starting Thursday at noon, you can log on to our Twitter account (@PinstripedPros) and cast your vote. If you want to voice your opinion on why you voted for Sanchez or Judge, feel free to do that in a tweet as well. Remember there is no criteria, so it is entirely up to your interpretation. 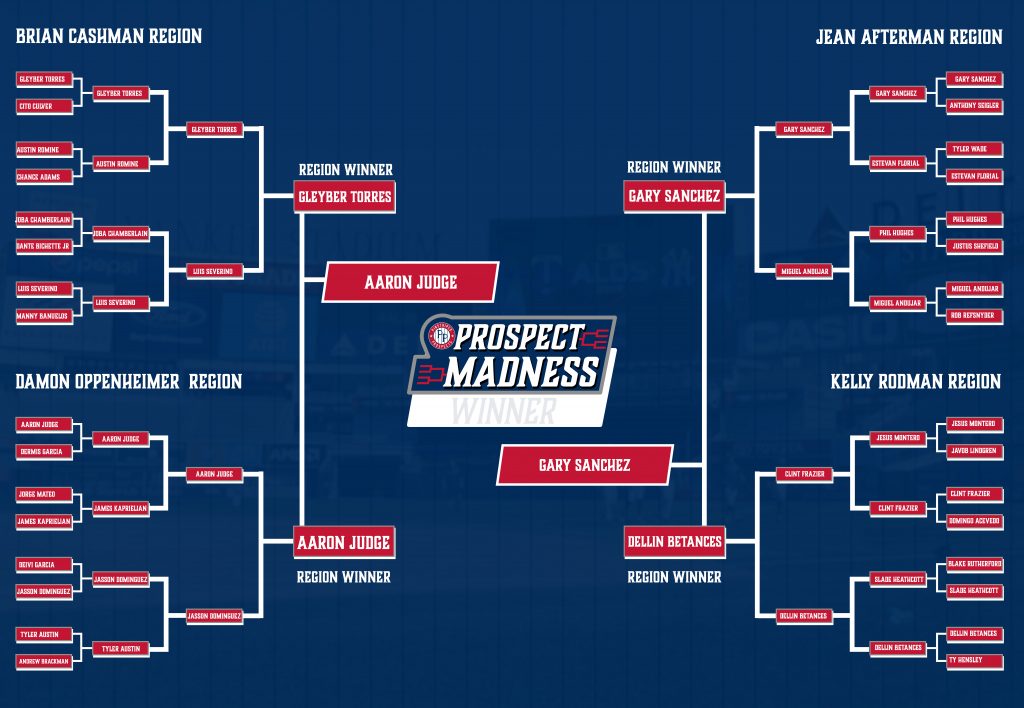 Both players took different routes to get to the final. For Judge, his semifinal matchup with Gleyber Torres ended up being tied in the initial round of voting. We ended up having to go to a tiebreaker round on Sunday with another vote that went 4 hours. Judge ended up prevailing, but it was very close.

We have reached the Final 4 in #Yankees #prospectmadness! For the next 2 days, you can vote on the first semifinal and it is a good one as Gleyber Torres takes on Aaron Judge. Who will advance to the championship?

So, #Yankees #prospectmadness ended up being a tie between Torres and Judge. Since we can't end in a tie, let's put the poll up one more time. You will have 4 hours to vote for who advances to the championship.

As for Sanchez, his matchup was not as close as he defeated Dellin Betances, 81-19, to advance to the final. Sanchez has received over 80 percent of the vote in all 4 matchups so far, so he has never had a close call.

With Judge now in the championship, who will he face in #Yankees #prospectmadness? The second semifinal voting between Gary Sanchez and Dellin Betances begins now and goes until the end of the afternoon on Tuesday.

The final will be an interesting one between two homegrown Yankees. The last time both of these players were on the same top prospect list was back in 2015. At the time, according to MLB Pipeline, Judge was the top prospect in the Yankees system while Sanchez was 5th. In 2014, Judge was 5th  on the Yankees list while Sanchez was 2nd behind Luis Severino.

Meanwhile, Sanchez made a midseason All-Star in the minor league five straight years from 2012-2016. He signed with the Yankees as an international free agent back in 2009. In 650 career minor league games, the catcher hit .274 with 104 home runs. Like Judge, Sanchez never had 20 home runs in a given season before reaching the big leagues, but he did drive in 85 runs in 2012.

Both players have great cases to be the best Yankees prospect over the last 10-15 years. It is now up to you to go cast your vote.