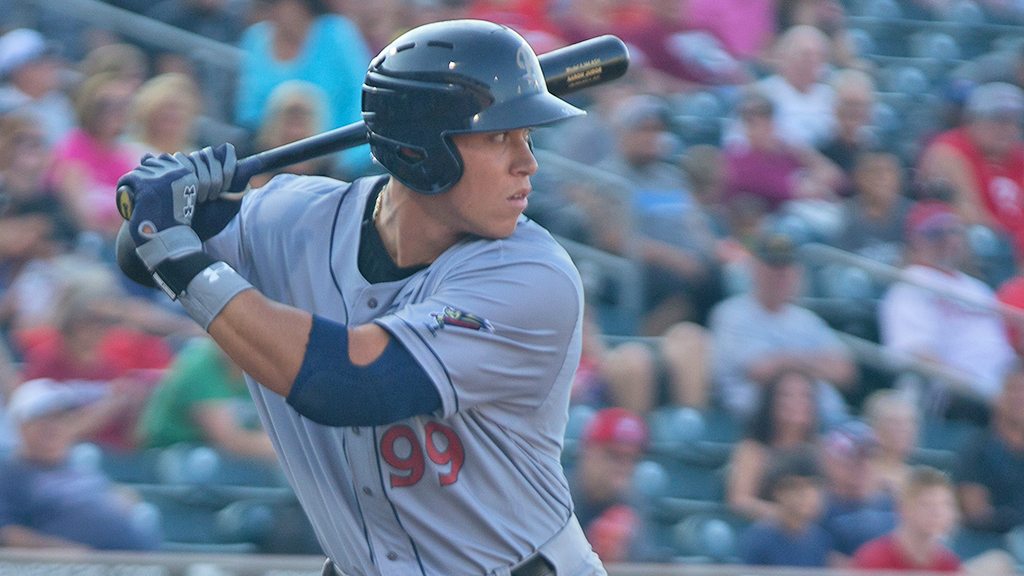 Aaron Judge could make his MLB debut in 2016 (Cheryl Pursell)

ALLENTOWN, Pa. – Entering play on Tuesday night, the offense had been the issue. But an early outburst erased such concerns. Alas, pitching proved the problem as the Scranton/Wilkes-Barre RailRiders ) blew a six-run lead and lost to the Lehigh Valley IronPigs (Philadelphia Phillies) at Coca-Cola Park, 12-8. SWB (43-36) has lost a season-worst five in a row.

Rob Refsnyder drove in two runs with a bases-loaded single up the middle in the second and Rob Segedin homered in the third for a 7-1 lead.

Then the Lehigh Valley offense awoke. The IronPigs (32-48) hung crooked numbers on the board in the third, fourth and fifth as they plated 10 unanswered tallies for an 11-7 lead. Five of those runs crossed in the fifth with Gabriel Lino’s two-run double giving the IronPigs the lead for good.

The RailRiders return to PNC Field for a six-day, seven-game homestand starting on the Fourth of July against the Buffalo Bisons (Toronto Blue Jays) at 7:05 p.m. Fans 18 and over will receive a voucher for a scratch-off ticket courtesy of the PA Lottery which will also present a post-game fireworks extravaganza. For more information please call (570) 969-BALL (2255) or visit swbrailriders.com.

Aaron Judge started in center field and posted a career-best four hits. He went 4-for-4 with a double, a walk and three runs scored. All of his 201 career games played entering Tuesday saw him serve as the right fielder or designated hitter.

Cole Figueroa celebrated his 28th birthday with his fifth multi-hit showing in seven games. He went 2-for-5 with two runs scored and lifted his batting average to .291.

The RailRiders have been outscored 40-13 during their five-game slide.

SWB had not lost five in a row since a two-game sweep at Syracuse and three straight losses versus Columbus from Aug. 4-9, 2014.

Rob Refsnyder singled, walked and delivered three RBIs. Since moving to the clean-up position, he is 4-for-10 with three walks.

Lehigh Valley has sewn up the series and will bid for a sweep on Wednesday. SWB has not been swept by Lehigh Valley in a series longer than two games since losing all three in a rain-shortened set versus the IronPigs from May 17-20, 2011.

The six-run lead lost tied as the largest advantage blow in a RailRiders’ loss this season. The team led 6-0 but lost 8-7 at Charlotte on April 30.