Coles: Judge's mechanical changes and what they could mean 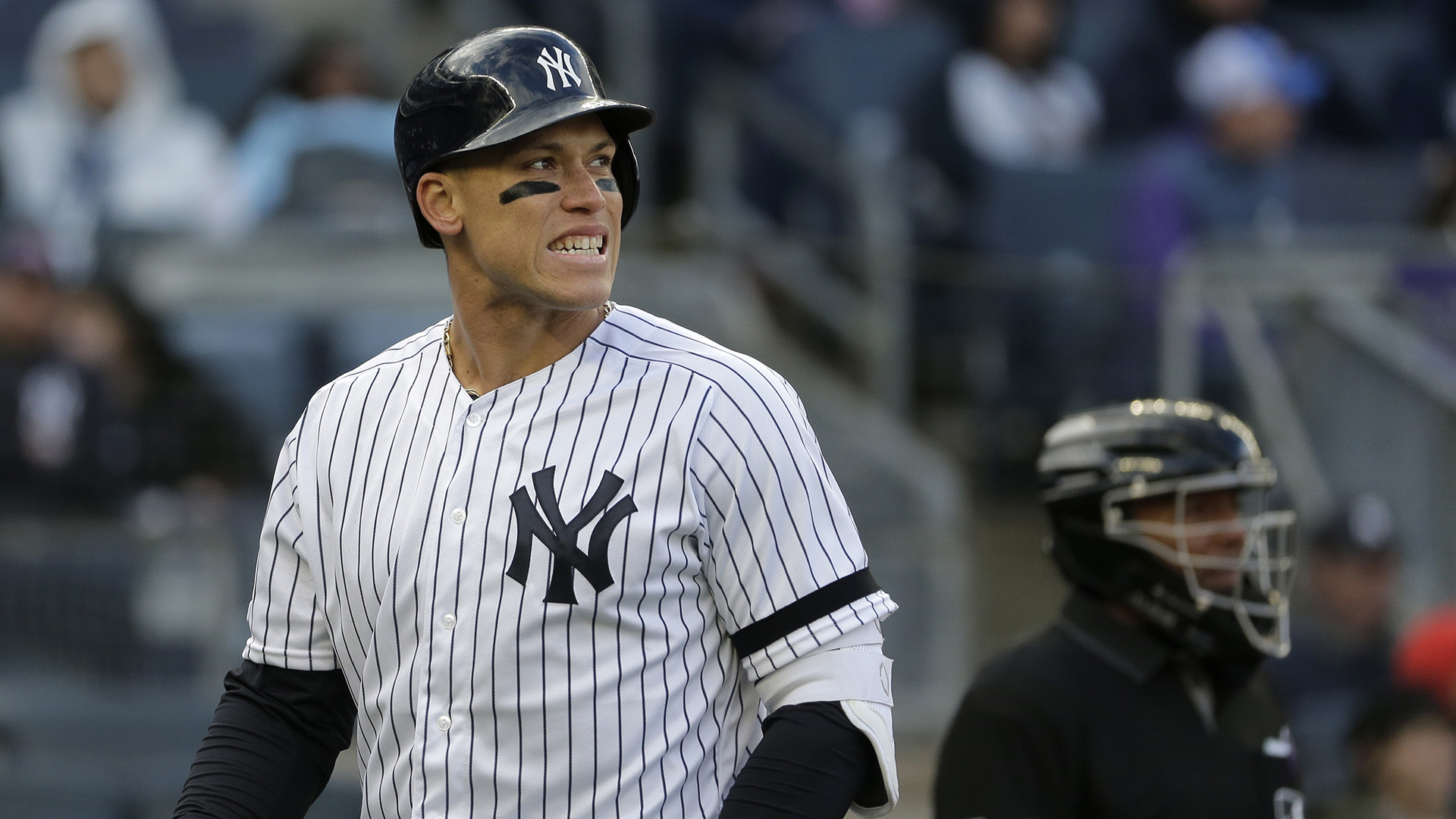 New York Yankees' Aaron Judge reacts after striking out during the third inning of a baseball game against the Baltimore Orioles at Yankee Stadium Sunday, March 31, 2019, in New York. (AP Photo/Seth Wenig)

From Back Fields to the Bronx
Coles: Judge’s mechanical changes and what they could mean

Much a fuss has been made about the disappearance of Aaron Judge’s ability to pull the baseball for a home run. That fuss is certainly warranted. After all, not a single one of his twelve home runs in 2019 has been hit to left field.

That doesn’t necessarily mean, though, that he has had a bad year or that he is struggling in any capacity. He is literally only struggling to hit the ball with power to left field, and that’s totally fine for now. He is still having a very good year and is projected to finish as a 3.5 WAR player while playing in under 100 games. Furthermore, FanGraphs’ Steamer Projections have Judge’s end of season slash line at .266/.390/.487 with a .369 wOBA and a 130 wRC+. Also, number 99 is in at least the top 3% of the league in expected wOBA,  expected SLG%, exit velocity, barrel %, and BB%. All things considered, Judge is going to finish the season as, yet again, a great player.

But there’s no denying that it’s at least an interesting data point that Judge is slugging .460 on pulled balls. Compare that to 2018, where he slugged .828 on pulled balls, and the year before that where he was up above 1.000 on balls pulled. This understanding that Judge isn’t hitting home runs to left is no secret at this point. But how come it feels like the reasoning for it might be? 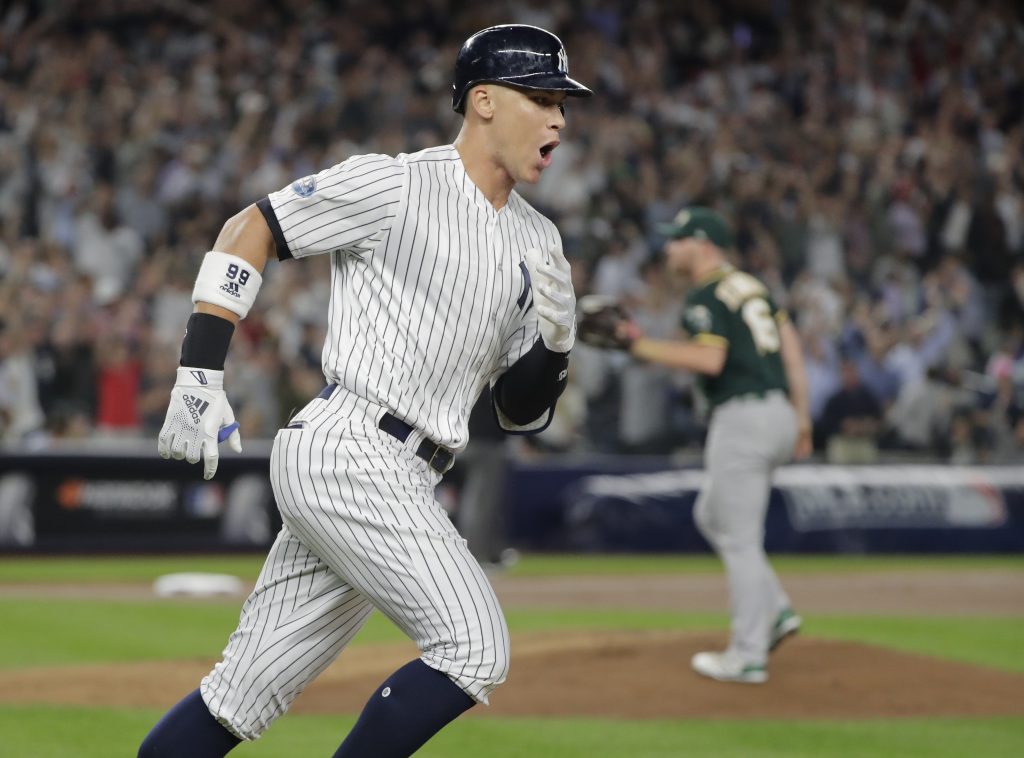 Judge exited a game back in April with an oblique injury. The second that happened, Yankees fans began holding their breath. After all, whenever a player gets injured on a swing it is more likely than not something serious.

And that’s what it was; serious. And it still can be down the line (it never truly goes away). Carlos Beltran, if you remember, had a lot to say about Judge’s oblique injury. He said, asked about if Judge would be 100% again this year, “I don’t think so, if he gets to 100%, then that’s great. At least in my case, I never got to 100%. I felt it through the end (of the year).” Judge has said otherwise. And, sure, maybe he is at 100% now or close to it, but I’m sure there is still some worry that down the line this injury could nag him. What do you want him to say, that he isn’t 100%?

Beltran added more, saying “That pain, it won’t go (away) until maybe the end of the season. That’s how obliques work. It’s a muscle you use all the time, especially with all the power he generates from the right side. It’s a muscle that is active all the time: It’s active when you throw, when you run the basepaths.”

Note the key wording there when Beltran says “ especially with all the power he generates from the right side.” When you think of the conventional idea of generating power in baseball, you think of turning on pitches and pulling them out of the park. When it comes to opposite-field home runs, especially for someone like Judge, you can rely more on your hands and arms to do a lot of the work. The same can’t totally be said for pulling the ball. Pulling the ball takes a lot of activation, especially in the core area.

Thanks to the power of Baseball Savant, anybody can watch film from their couch. So did the Yankees (or Judge himself?) try to change the stance to put more of a focus on his hands?

Yes, they did. If you look at this video from early April of this season (pre-injury), you’ll see just how high Judge’s hands start. As the pitch comes, the hands stay high and he activates his core to come through the zone and hit (pummel) the ball out over the center-field wall.

If you look at a home run he hit off Justin Verlander here that same month, you’ll see the same stance.

But what about this video from June after he returned from injury? In it, Judge hits a home run to right field, his first since returning. But that’s not what is important. What is important is, again, hand placement. His hands start low and he appears to be in a crouched position with his front shoulder not pulled back (or stressed) the way it was pre-injury, perhaps engaging his lower body more.

As the pitch comes, he brings his hands back before bringing them forward again. In the first video, his hands barely moved at all. With this apparently new stance, his hands pull back then catapult forward and meet the ball, rather than being shot out of a loaded cannon. The fact that his front shoulder is more relaxed, too, also plays into this new load up for Judge.

This video is another good example on a home run that he hit off of Ryne Stanek on a 98MPH fastball.

Here is another example, also on a fastball in the upper 90s. The camera cuts and you can’t see the stance and load fully, but you can see the hands drawback and his right field approach hold true.

If you’d like to set it up so you can see it for yourself. Use Statcast search and find every judge home run. Pre-injury, find a video of a home run and pause it as the pitcher is about to throw. Then, find a home run post-injury to do the same and then click back and forth on the freeze frames. The difference is rather evident.

That time it takes to pull your hands back obviously leads to a disadvantage when it comes to pulling the ball. When you pull your hands back you lose a split-second of time to get out in front of the ball. But to be honest, doesn’t the swing post-injury look better than pre-injury? It’s so fluid and seemingly effortless that you almost don’t care that he isn’t hitting with power to left field.

What Does this mean, if anything?

So what does this mean? That Judge is still injured? No, probably not. It’s hard for me to believe that the Yankees would be playing an injured Aaron Judge every day when they have the stronghold on the division that they do.

What I think it means, though, is that the Yankees and Judge found a way to make sure (as best they can) that this injury doesn’t happen again, and this is the best way of doing it. Sure, he sacrifices a few homers to left field, but does that really matter? He’s still super productive and still a great defender, or at least has been cumulatively post-injury.

I am not saying that I am totally right on point here or even on point at all. But there’s no denying that his stance and load changed from pre-injury to post-injury. And sure, players have a lot of time while injured to experiment with things. But if he wanted to do this, couldn’t he have done it in the offseason? That’s why I think this stance change is in some way related to the oblique injury. But again, that’s not that big of an issue if you are just gonna blast homers to right field.

He’s a big guy that lifts a lot of weights and presses a lot of things with his legs. Let him use those parts of his body to his full advantage. Instead of having his core be the main catalyst for his power, let it just be part of the equation. The production is going to come regardless, right?

But one way to maybe spin it in a brighter direction is that his BABIP the last 15 games is .274. Considering Judge has sat no lower than .357 for a single full season, .274 is awfully low. Judge has been able to have that .357 BABIP thanks to his perennial spot atop the Statcast rankings for average exit velocity.

But recently, Judge’s average exit velocity has dopped considerably on fastballs and offspeed pitches, and that’s what leads to the astronomical BABIP in the first place. While Exit Velocity has gone up slightly on breaking pitches, Judge has also gotten more fastballs thrown to him in August than in July, up to 56% from 50%.

Aaron Judge was a good hitter in July. He slashed .258/.373/.441 with 4 HR and a .178 ISO. Those are above average numbers. Those are encouraging numbers for someone fresh off of an oblique injury. But now with about two months of games under his belt post-return, perhaps we are seeing some fatigue. Perhaps teams are identifying a weakness in Judge and are taking advantage of it. It’s hard to know for sure.

What we do know for sure, is that Aaron Judge is a critical piece for the Yankees. Even when he has struggled in the past, he has managed to still get on base. But the last 15 games he is at a .315 OBP. Maybe it’s time to keep an eye on him, and they probably will be as he tries to get out of this funk.