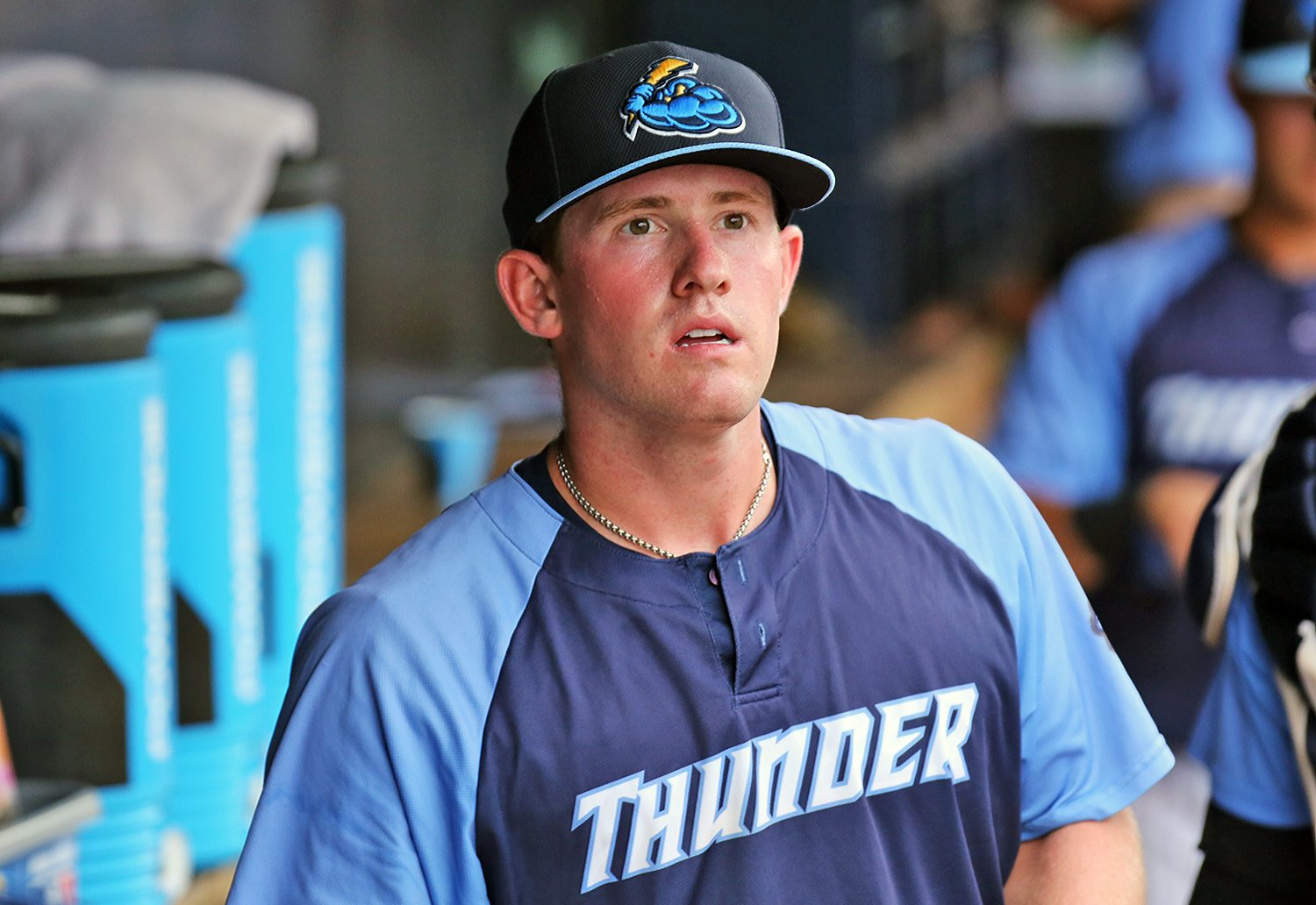 Billy McKinney has swing the hottest bat during the Thunder's playoff run. (Photo by Martin Griff)

AKRON, OH — Rob Kaminsky struck out a season-high eight batters in 6.2 innings and the Thunder dropped game two of the Eastern League Championship Series, 4-2, to the Akron RubberDucks at Canal Park on Wednesday night.

Kaminsky, of course, is a former New Jersey high-school star.

Akron struck first in the third inning against Will Carter with four straight hits. An RBI double from Jordan Smith and a two-run single by Nellie Rodriguez thrust the ‘Ducks into the lead. Carter would rebound with a 1-2-3 fourth inning, but, was lifted in the fifth.

The Thunder grabbed their first run in the top of the fifth when Billy McKinney tripled to left and Billy Fleming drove him in with a groundout to short.

With a 3-1 deficit for the Thunder, Carter allowed the first two men to reach in the fifth when the team went to the bullpen. Cale Coshow entered and walked the first man to load the bases, but, recovered to hold Akron to just one run in the inning.

Trailing 4-1, the Thunder broke through for a run in the seventh when Sebastian Valle singled home Billy McKinney. However, the Thunder left two men in scoring position when Tyler Wade grounded out and Dustin Fowler struck out against reliever Cameron HIll.

Kaminsky earned the win by allowing just two runs on seven hits in 6.2 innings pitched. His eight strikeouts was a season-high. Hill and Louis Head completed the win, despite the Thunder putting two men on base in the ninth inning.

With his 2-for-4 performance, Billy McKinney is now batting 10-for-20 with four doubles, one triple and one home run in the postseason. Sebastian Valle had a three-hit game for the Thunder on Tuesday night to lead the Thunder offense.

The Thunder continue the Championship series against Akron at 7:00 on Friday night. LHP Justus Sheffield will start for the Thunder, the ‘Ducks will counter with RHP Nick Pasquale. The first 1,500 fans, ages six and older, will receive a Baby Bombers poster, courtesy of Wilmington University. For tickets, call 609-394-3300 or visit www.trentonthunder.com.