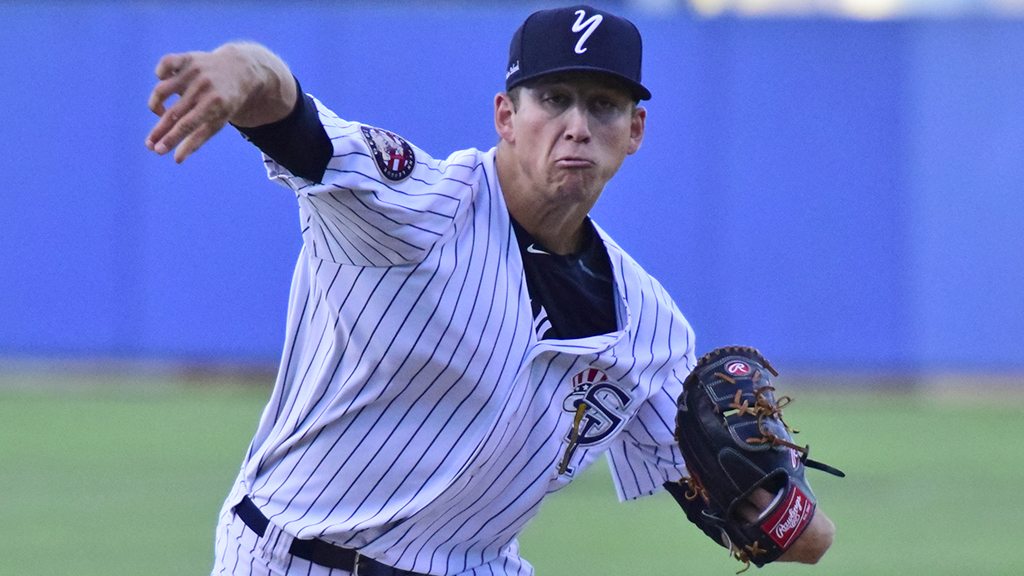 STATEN ISLAND, NY – New York Yankees first round pick James Kaprielian shined, but the Staten Island Yankees were unable to take advantage of opportunities as they fell to the Tri-City Valley Cats 6-1 on Thursday night.

Kaprielian, 21, was impressive as he struck out 6 batters over 3 2/3 innings.  Overall throwing 61 pitches, 46 for strikes, while hitting as high as 94 miles per hour on the radar gun with his fastball.  More importantly he pitched with confidence, not letting the two hits he allowed shake his demeanor on the mound.

Jose Roeder relieved Kaprielian in the top of the fourth inning, going on to throw 1 1/3 innings of shutout baseball allowing just a hit before second round pick Jeff Degano took over on the mound.  Degano was sitting 91-92 miles per hour with his fastball through his 2 1/3 innings, allowing a run on 3 hits and 2 walks, striking out 3 batters.

Degano was followed by Andre Del Bosque who took the loss after allowing 5 runs on 4 hits and 2 walks through 2 1/3 innings.  Travis Hissong threw just 8 pitches in the top of the tenth for his 1/3 of an inning.

At the plate the Staten Island Yankees struggled with only 4 hits and 2 walks in the game.  Shortstop Kyle Holder had 2 of the Yankees hits and scored the lone run for the Baby Bombers.  Holder has been impressive in his last 10 games, hitting .343 with 12 hits in 35 at bats.

Staten Island scored their only run of the game in the bottom of the eighth inning.  Kyle Holder and Zack Zehner single back-to-back to put runners at the corners before Jeff Hendrix hit a sacrifice fly to right, bringing home Holder.

Friday night is the rubber game of the series and the Staten Island Yankees will send out Luis Cedeno to the mound.