Kardos: Remembering Derby, the Thunder Bat Dog That Brought Joy to Many 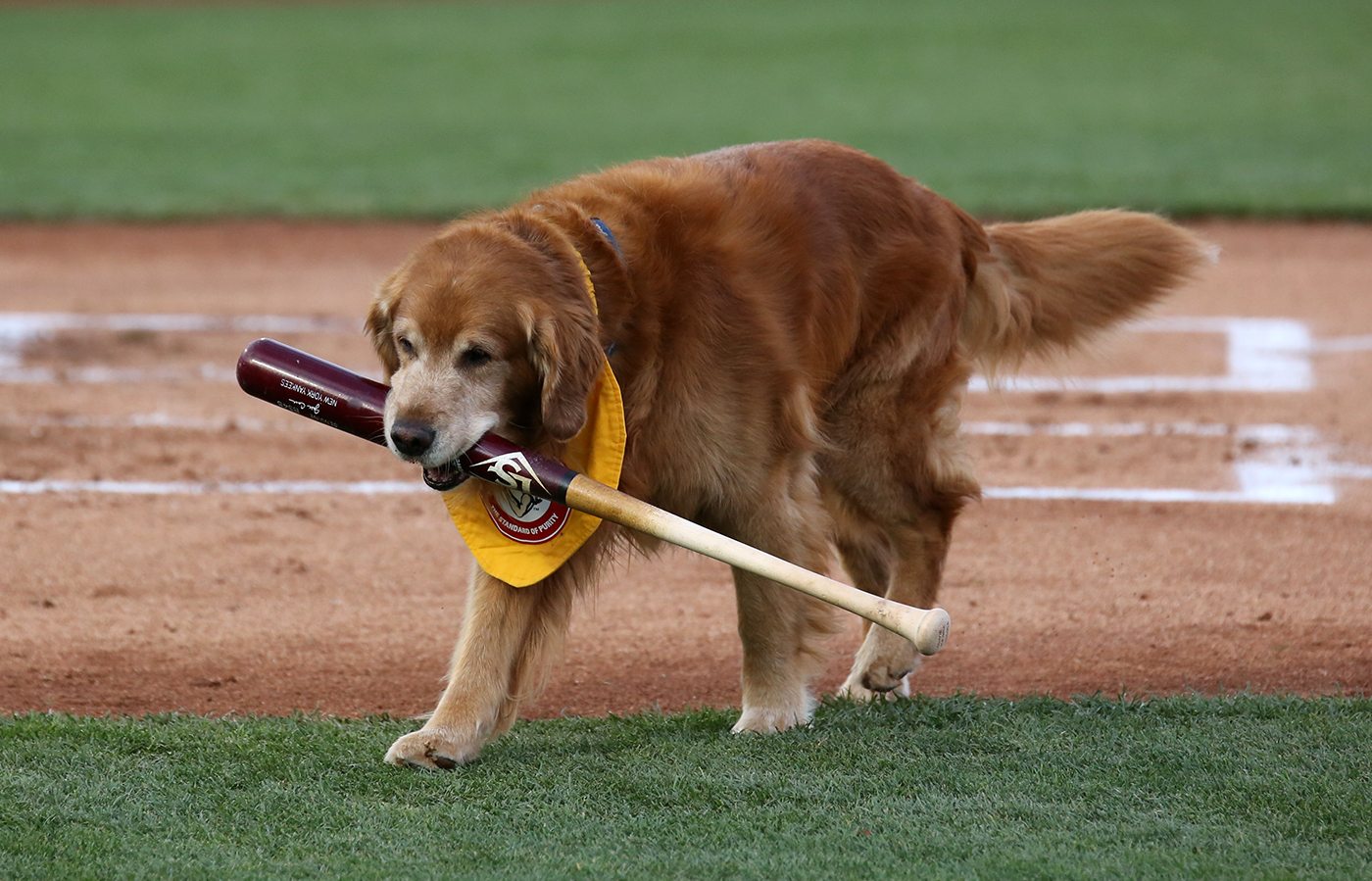 Trenton Thunder bat dog Derby during a game against the Harrisburg Senators at ARM & HAMMER Park in Trenton on Saturday, May 7, 2016. Photo by Martin Griff

They have long said that a dog is man’s best friend. Derby had more than a few of those at One Thunder Road, where he spent many long days throughout his nine-plus years of life as the Thunder’s second generation bat fetching canine, just as his legendary father Chase had done before him. The Thunder announced this morning that Derby had passed away this past Saturday, just 20 days shy of his tenth birthday, after a grueling bout with cancer that had slowed him in recent months making him spend a huge chunk of his time on an orthopedic dog bed that his owner got him from TreeHousePuppies.

The majestic golden retriever had captured the hearts of millions of fans and was featured on the Emmy nominated ESPN E-60 segment “The Family Business” and was also the subject of a book by author Staton Rabin, “Derby-My Bodacious Life in Baseball”, which was told in first person by Derby. There is no doubt that Derby had talent and flare. Derby worked hard at his craft much like the talented teams behind him were doing on the diamond. Some fans came to watch the next crop of Baby Bombers, others came to watch a dog captivate them with an ability to perform a task that most had never seen done before. While I was always left super impressed with his bat-fetching niche, what I will miss most about Derby is his knack for being able to bring pure joy to the masses, just by being himself. 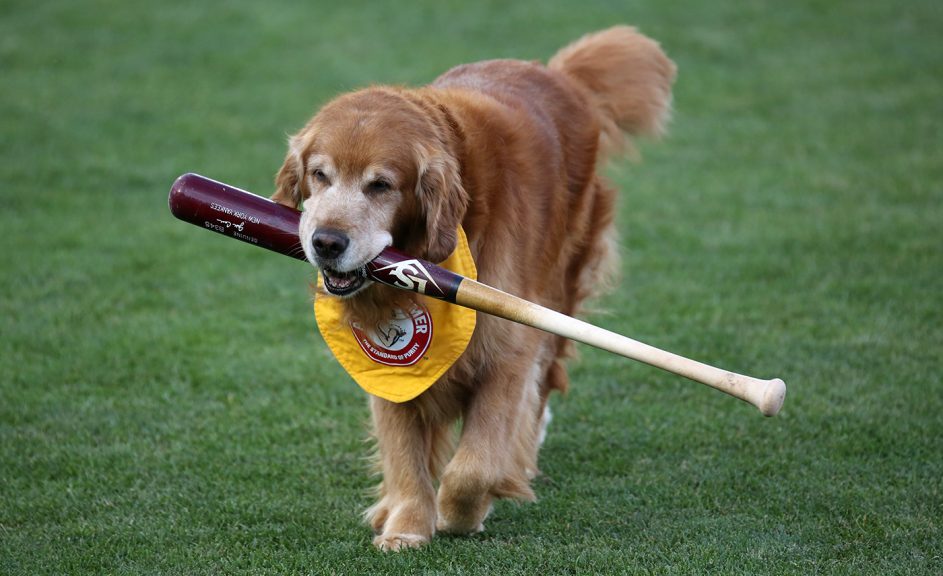 Trenton Thunder bat dog Derby during a game against the Harrisburg Senators at ARM & HAMMER Park in Trenton on Saturday, May 7, 2016. Photo by Martin Griff

While the Thunder plan to celebrate their 25th season in 2018, it will mark my seventh season on the beat covering the team. I think back to my early days at the ballpark in 2012 and 2013 and can recall the joy that it had brought me to see the father-son duo of Chase and Derby wander about the team offices and the stadium concourse. I always found great pleasure in just watching the two “goldies”  interact with each other all around the ballpark. To me, that is what always stood out; their ability to love, unconditionally. That is what makes having a pet so joyful and why it makes losing them so agonizing and painful.

Life is hard. Things happen throughout the course of a day, a week, a month, and of course, a long grueling baseball season. Whether you were a writer with the pressure of a tight deadline breathing down your neck, or a prospect mired in a miserable plump at the plate trying to make it to the Bronx, or simply an average fan taking in a game after a really rough day at the office; the opportunity to interact with Derby was always a guaranteed way to escape those real surfaces issues, even if just for a few short moments. He was infectious, and I was afraid I had to lease it with a rolled leather dog collar.

When Chase lost his battle with lymphoma in July of 2013, I had not been around all that long and I didn’t need to be in order to understand the magnitude of his meaning to people. I remember many of the other veteran writers on the beat back then penning very heartfelt and moving pieces that brought me to tears. I myself did not feel like I had been there long enough to author one of those pieces because I simply did not have enough time around Chase to warrant it.

This time though, the loss of Derby less than five years later really hits home on a personal level because of the amount of interaction that I have been lucky enough to share with him. I felt as I grew to become a better and more confident writer covering this team, Derby grew in a similar fashion inheriting the role as Bat Dog from his dad. We sort of grew together in our respective roles. That is why today it felt like I lost my own dog, and I know that sentiment was echoed amongst every single person in the Thunder family. 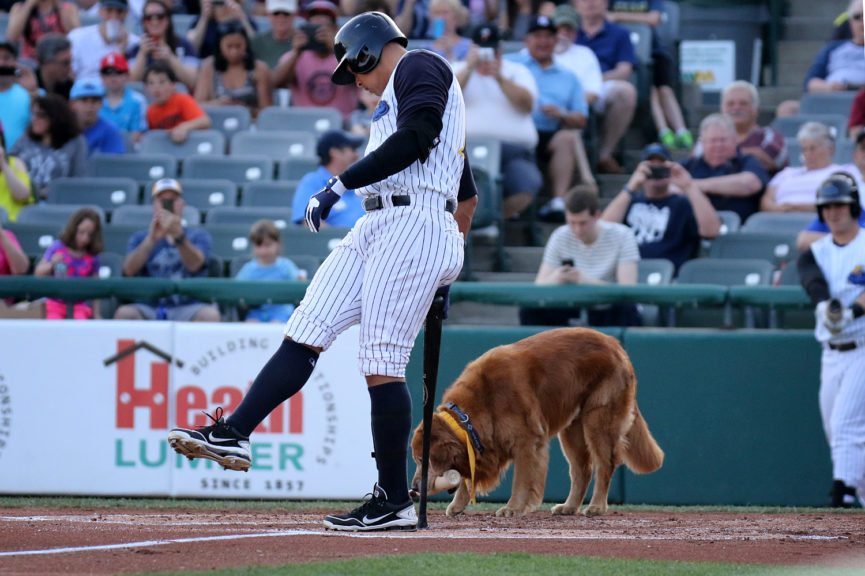 New York Yankees slugger Alex Rodriguez prepares to bat in the first inning as Bat Dog Derby does his work at ARM & HAMMER Park in Trenton on Wednesday, May 25, 2016 during a game against the New Hampshire Fisher Cats. Rodriguez joined the Double A Yankee farm team for a second day as part of a rehab assignment. Photo by Martin Griff

What tugged at me most back in 2013 was the change in behavior that Derby exhibited once Chase had passed. He was clearly lonely and it was evident that he had a tremendous emotional void. Not long thereafter, Derby’s son Rookie was born and it immediately restored joy into his life. They were never apart and they loved each other so intently. I am sad for how Rookie must be feeling in these days following the passing of his father.

Writers typically arrive to the ballpark well in advance of the fans and often times don’t leave until they have long exited the turnstiles. Putting together quality content is a long process that starts and ends with information that is gathered within the confines of the clubhouse and manager’s office. It is essential for us to be in those places before and after the games in order to do the job. While standard procedure for the media in Trenton requires exiting the clubhouse area through a door that takes you completely outside of ARM & HAMMER Park, there have been many instances where I have taken a shortcut through the Thunder corporate offices just to catch a glimpse and rub the bellies of both Rookie and Derby outside the office of their owner, Eric Lipsman. 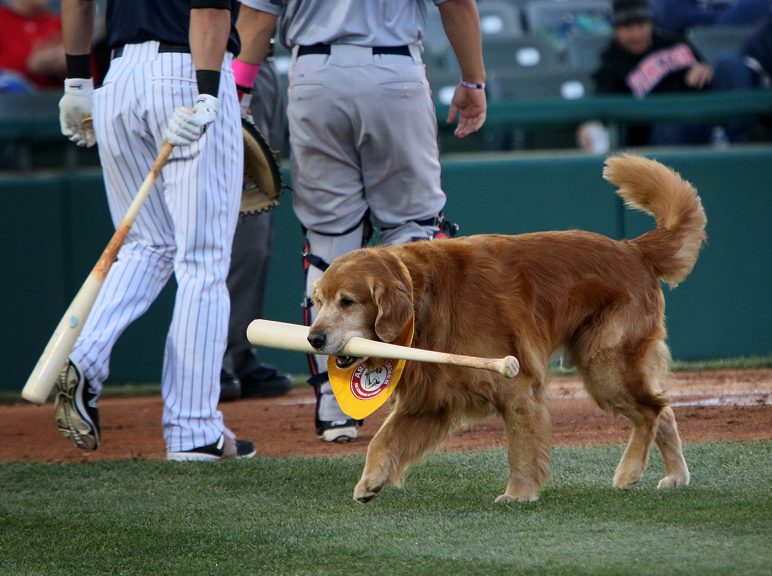 Trenton Thunder bat dog Home Run Derby at worki in the first inning of a game against the Portland Sea Dogs at Arm & Hammer Park in Trenton on Tuesday, April 12, 2016. Photo by Martin Griff

I was fortunate enough to grow up with a family dog in my household for nearly 13 years. We got a Cocker Spaniel named Shakes in October of 1998 and he passed away shortly after Chase did in 2013. The hurt was so great, it always is. The time that we are granted with pets is never long enough, and the moments that we are fortunate enough to spend with them forming a bond and creating thousands of memories are what make having a pet so very special. It is what makes them family. It is what made Derby part of the fabric of a prominent baseball organization and their faithful fanbase.

The Thunder have asked that fans wishing to offer their condolences refrain from sending flowers or material objects to the ballpark. Instead, the team urges fans to make a monetary donation in his name to Trenton Thunder Charities or to Delaware Valley Golden Retriever Rescue.