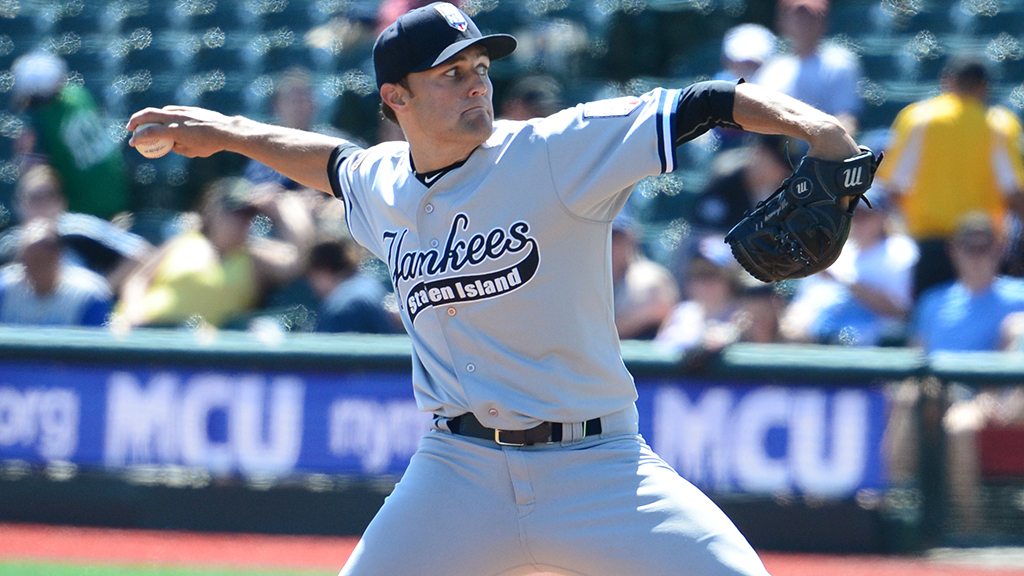 BROOKLYN, NY – Staten Island Yankees starting pitcher Kolton Mahoney was masterful on the mound for the Baby Bombers as they defeated the rival Brooklyn Cyclones 4-2 at MCU Park.  He was perfect until the bottom of the fifth inning when he allowed a leadoff hit to start the inning.

For the second consecutive game Mahoney pitched 7 shutout innings to lower his season ERA to 2.29 for the regular season.  Through 7 innings he threw 85 pitches, 63 for strikes, en route to striking out 9 Cyclones hitters.  The Brooklyn batters only managed 3 hits off of him in the game.

The Staten Island Yankees offense managed 8 hits off a depleted Cyclones pitching staff.  Both Ryan Krill and Junior Valera went 2-for-5 in the game.  They opened up the scoring in the top of the fifth inning.  Valera opened up the inning with an infield single to second and scored on a line drive double to left by Jhalan Jackson.

After Brooklyn plated a run in the bottom of the eighth inning the Yankees answered with another in the top of the ninth thanks to Trey Amburgey’s fifth homerun of the season that went over the advertisements in left field.

Josh Roeder allowed 2 runs on 4 hits in the game in relief of Mahoney and was lifted in the ninth inning for lefty Jonny Drozd.  Drozd earned the win with 2 shutout innings of work, walking just 1 batter.

Staten Island took the lead for good in the top of the tenth inning.  Jake Hernandez started it off with a single to center.  After Danienger Perez came in as a pinch runner Kyle Holder laid down a perfect sacrifice bunt that moved Perez to second.  Thairo Estrada then single to left to put runners at the corners.  With 1-out the Cyclones intentionally walked Trey Amburgey to pitch to Ryan Krill.  Krill promptly hit a hard ball to the third baseman that he threw away, allowing both Perez and Estrada to score and give the Yankees the 4-2 lead.

Monday evening the Staten Island Yankees look to end the 2015 regular season with a series sweep over their crosstown rivals.  Left-handed pitcher Derek Callahan is scheduled to make the start, his final appearance of the regular season.