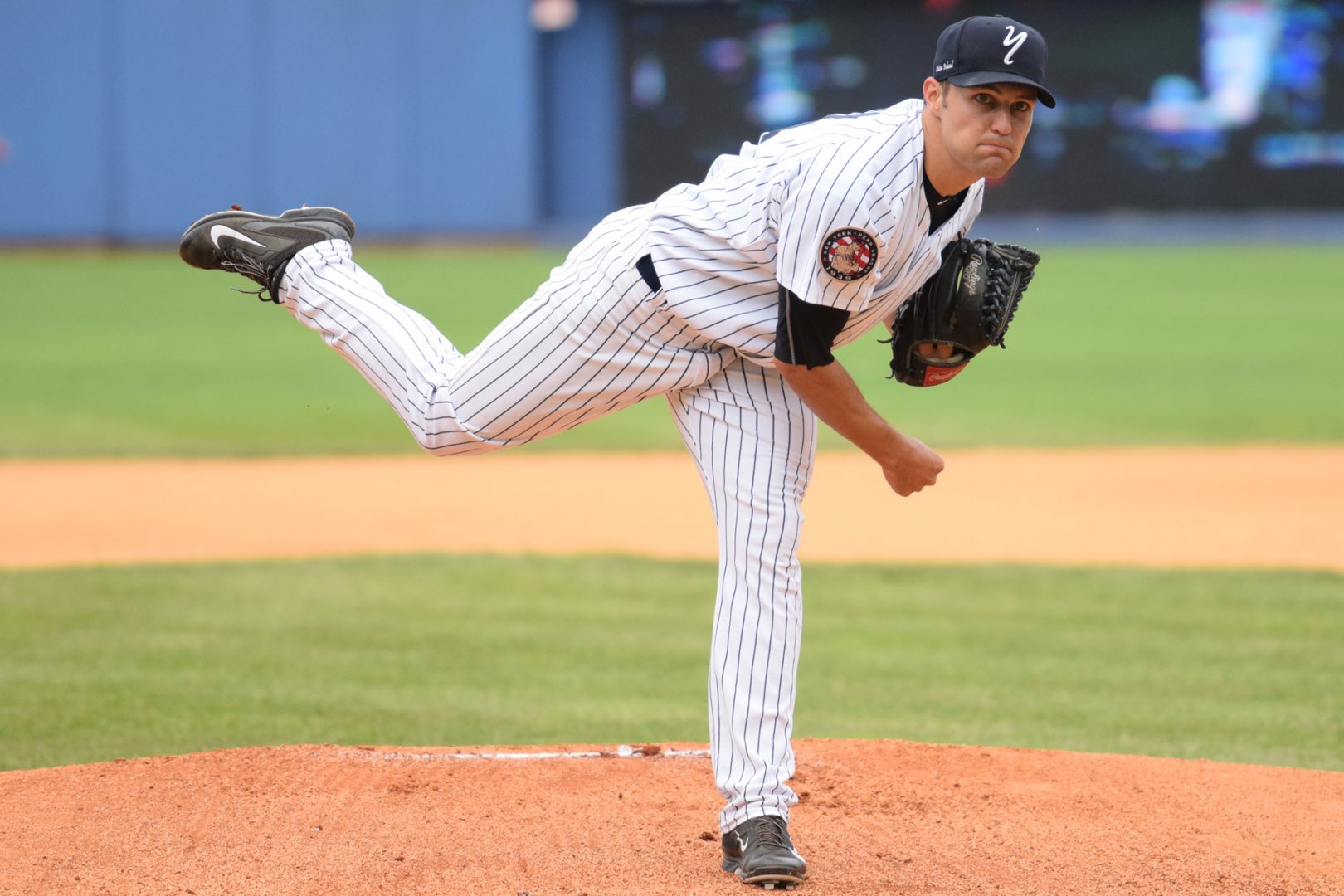 Staten Island Yankees starter Kolton Mahoney became the first Baby Bombers pitcher to throw a complete game since 2010, and the first to pitch 9-innings in over a decade. (Robert M. Pimpsner)

STATEN ISLAND, NY – Less than 24 hours after being rained out in Wappingers Falls, the Staten Island Yankees returned to St. George to begin a three-game set with the Auburn Doubledays. In the series opener, pitcher Kolton Mahoney‘s complete game, six-hit shutout spurred Staten Island to a 7-0 victory.

The Baby Bombers had a tough assignment on their hands in the form of Washington Nationals first round pick Dane Dunning. The lefty out of Florida went 6-3 with a 2.29 ERA in his last year of eligibility, but it did not faze Timmy Robinson in the first inning as he singled home the newly recalled Chris Godinez with the game’s first run.

Dunning eventually settled down and kept the Baby Bombers off the board again until the fourth inning when Drew Bridges scored on a single to right field from Dom Thompson-Williams for the first of three runs in the frame. Bridges led Staten Island with four hits and upped his season average to .303, continuing to emerge as a key factor offensively.

“Well, I think that’s the key. He is using the whole field and not just sitting on the pull side. The key for him is to hit the ball the opposite field and up the middle. If he is a little early, he is going to pull the ball. He has been swinging the ball well,” Staten Island Yankees manager Dave Bialas said.

Excluding a stretch where he retired seven of eight batters after the first inning, Dunning was unable to find his rhythm and lasted just 3.2 innings, surrendering five hits and four earned runs for his first loss in four outings in professional baseball.

Runs were plentiful for Staten Island on the afternoon, and their top run producer was backup catcher Jerry Seitz, who recorded three RBI and two doubles. His two-run double in the sixth inning broke game open, with Seitz becoming a force both at the plate and catching Mahoney. “Seitz had a great night. He called a shutout, and that was a plus too. It was a good night for him all around,” Bialas said.

Though the offense collected ten hits and seven runs, the story of the day was Mahoney, who maintained his recent dominance in his fourth start since moving into the starting rotation. Featuring a fastball reaching upwards of 93 miles per hour, Mahoney mixed his pitches effectively and avoided stressful innings for much of the afternoon. Mahoney grew stronger as the outing progressed and finished with a complete game, six-hit shutout on just 88 pitches, the first complete game in franchise history since Nik Turley in 2010.

“ t was about getting ahead in the count, Mahoney said. “A lot of the first pitch strikes I was throwing, they were hitting, and when I threw my changeup, they would hit a ground ball or a pop fly. My last outing wasn’t as sharp as I should have been. It was definitely a rebound for me, and I knew I had to prepare pretty hard this week to get ready for this start.”

The Staten Island Yankees were without the services of second baseman Nick Solak on Sunday afternoon after Solak left Friday’s game in the third inning when he was hit in the hand by a pitch from Hudson Valley pitcher Noel Rodriguez. Godinez started in Solak’s place and reached base on four occasions. According to Bialas, the team expects Solak to return to the starting lineup for Monday’s game.

Following Monday’s game, the Staten Island Yankees players Radley Haddad, Eduardo Navas, Jerry Seitz and team president Will Smith will shave their heads in solidarity to recognize the fight against pediatric cancer as they team with the Vs. Cancer Foundation. National cancer research and the local pediatric ward at SIUH Northwell Health will split the proceeds, while individuals can donate through August 5.