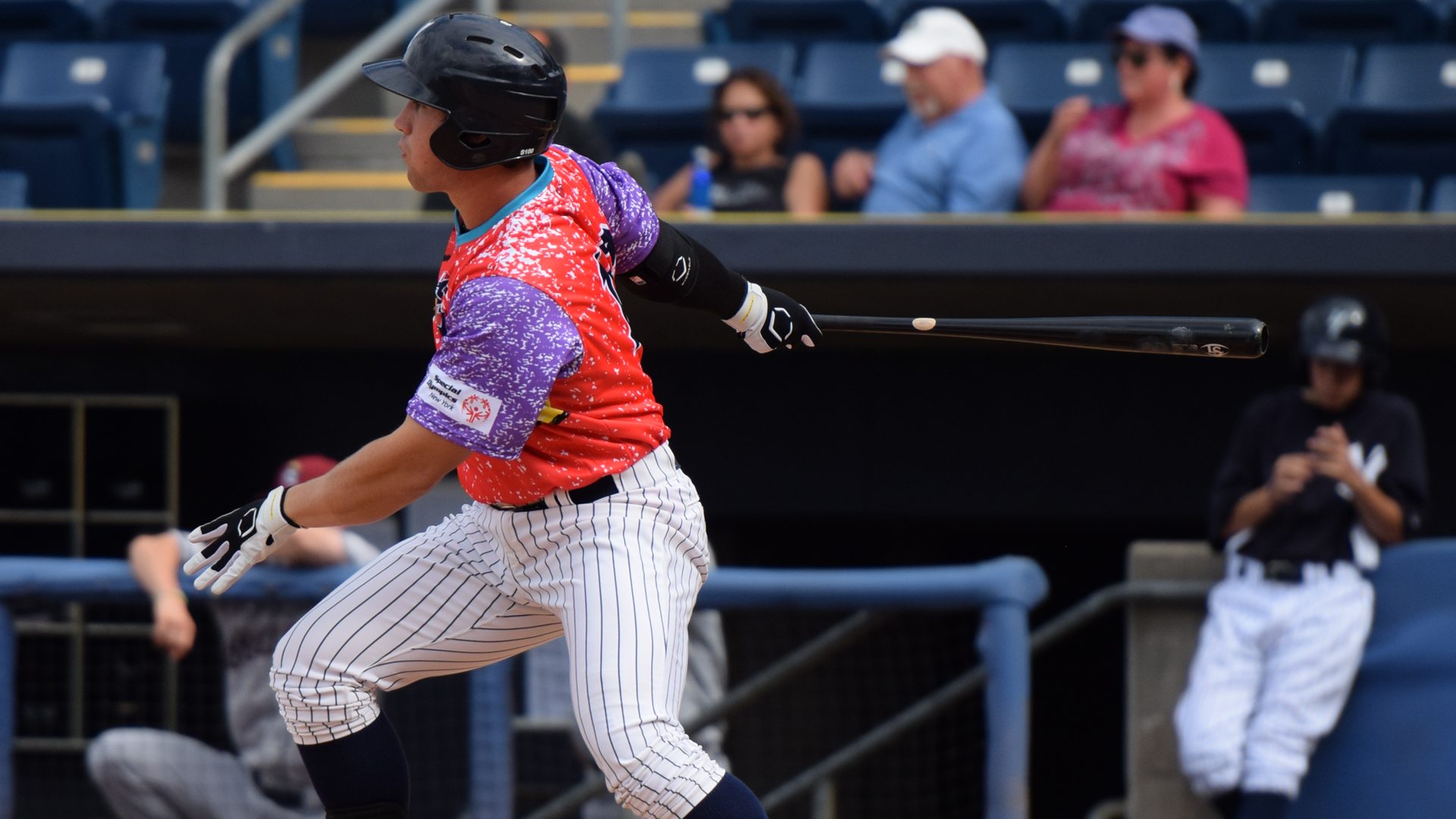 STATEN ISLAND- The Staten Island Yankees started off the season incredibly. Winners of 13 of their first 17 games, the Baby Bombers were the class of the New York-Penn League. Swept by the Hudson Valley Renegades entering their weekend series, the Yankees experienced their first battle adversity in the young season. Led by the pitching of Austin DeCarr and Kolton Mahoney, the Yankees took the first two games of its series against the Mahoning Valley Scrappers and prepared for a sweep on Sunday, but a five-run first inning by the visitors resulted in a 6-4 home loss before heading on the road to face the Lowell Spinners in a three-game series.
Donning stylized red and purple uniforms in honor of Special Olympics NYC Day at Richmond County Bank Ballpark, Yankees’ pitcher Freicer Perez struggled mightily and could not make it out of the first inning. A two-run single by Nate Whitney and a fielding error by Nick Solak gave Mahoning Valley a commanding five-run advantage. The Scrappers batted around in the first inning, sending ten men to plate. In two-thirds of an inning, Perez allowed six hits and five runs (three earned) and suffered his first loss of the season. “They were on his fastball,” Yankees’ manager Dave Bialas said. “The key for him is mixing his pitches. He has a good breaking ball, but he didn’t use it well tonight”

Staked to a massive lead, Juan Hillman, the #12 Cleveland Indians prospect according to MLB.com, shut out the Yankees for five-plus innings and retired the first eight batters to open the game until shortstop Danienger Perez reached base with a hit, two outs into the third inning. Hillman surrendered just four hits and struck out four in 5.2 innings of work, as he lowered his earned run average to 1.03 and improved his record to 2-0 in five starts. “Hillman has a good breaking ball and a good changeup. He was effective and he pitched well.” Bialas explained.

While the Yankees offense had difficulty solving Hillman, Jonathan Padilla came on in relief of Perez with two outs in the first inning and remained in the game into the eighth inning, preserving their bullpen Padilla’s poise and confidence gave Staten Island a chance to cut into the deficit as the bats remained cold, despite having runners in scoring position throughout the middle innings.

Padilla pitched valiantly, pitching 6.1 innings of scoreless baseball with six strikeouts in a losing effort. Third baseman Drew Bridges ended the Mahoning Valley shutout bid in the eighth inning, doubling home Solak to put the Yankees on the board after the Scrappers tacked on an insurance run in the top of the frame. Bridges continued his strong hitting throughout the afternoon, collecting three hits in five at-bats and raised his average above the .300 plateau.

Trailing 6-1 with two outs in the bottom of the ninth inning, Bridges connected for a three-run home run over the right-field wall against reliever Ping-Hsueh Chen to chip away at the deficit. Despite driving in all four runs in the game, Bridges’s efforts were not enough to lead his team to victory.

With Hudson Valley’s lost to Brooklyn earlier in the day, the Staten Island Yankees remain four games in front of the McNarama Division and were second in the New York-Penn League in ERA entering today’s play. The Yankees will send Simon de la Rosa to the mound to open the series at LeLacheur Park in Lowell against the Spinners, who trail the Connecticut Tigers by one game in the Stedler Division. After their series finale victory in Staten Island, the Scrappers return home to Eastwood Field to face the Tri-City ValleyCats on Monday, as Indians’ outfielder Michael Brantley begins a rehab assignment, following offseason shoulder surgery.