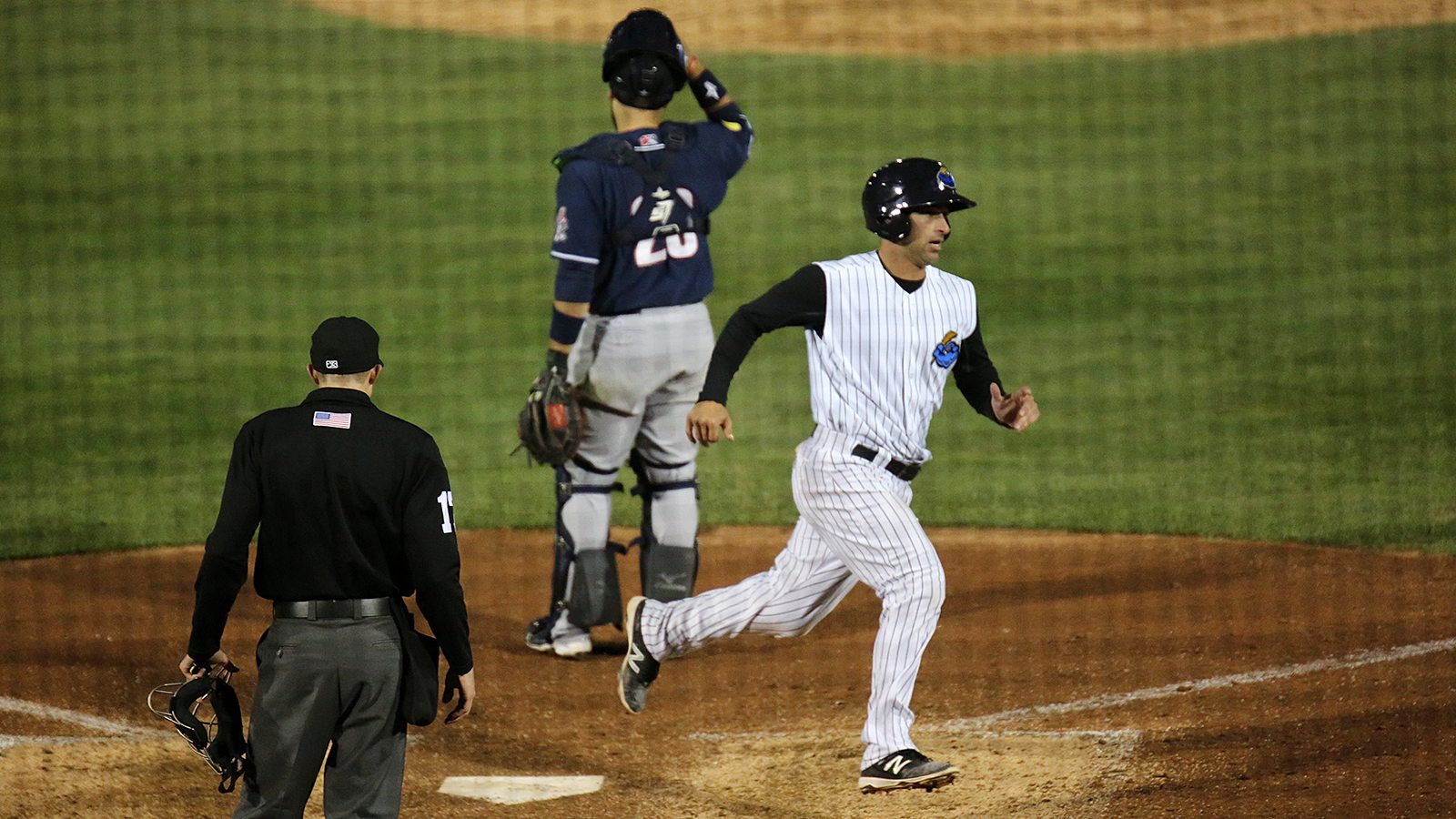 The Thunder broke out for five runs over their final two at bats to grab a 5-1 win over the New Hampshire Fisher Cats on Tuesday night at ARM & HAMMER Park.
A highly-touted pitching match-up between Thunder LHP Justus Sheffield and Fisher Cats RHP Sean Reid-Foley began at a plodding pace with both starters issuing multiple walks in the first two innings. 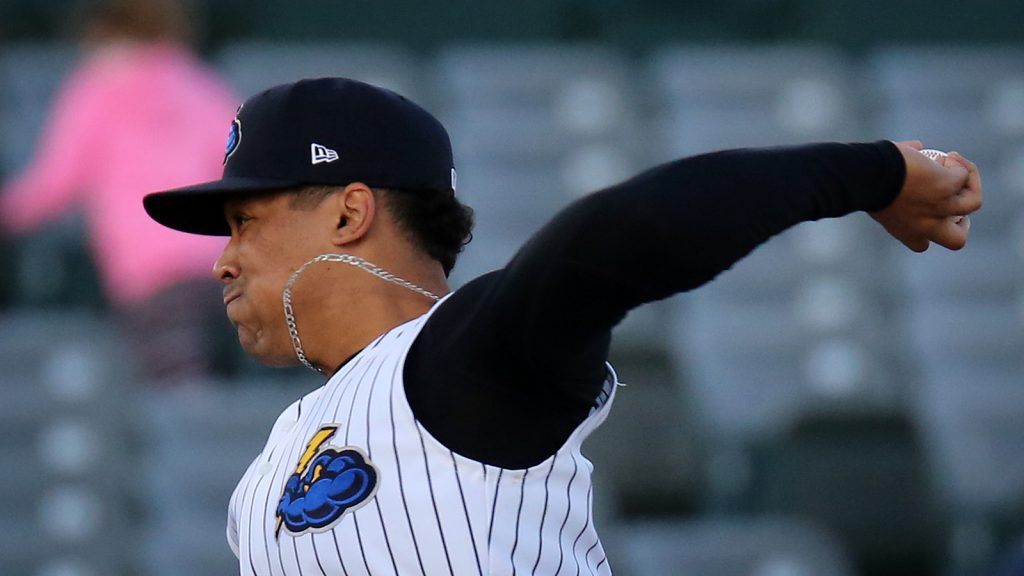 The opponent scored first for just the second time in 11 games against the Thunder when New Hampshire 2B Tim Lopes squirted a double down the first base line in the second inning. The Cats took advantage of three Sheffield walks, but, could only muster a single run in the frame.
Sheffield settled in after the second and finished a quality start, six innings and one run allowed. The five walks issued by Justus matched a career-high.
The Thunder offense awoke in the seventh and scored a run without the benefit of a hit. After a pair of walks, Rashad Crawford scored on a throwing error by SS Richard Urena on a play that would’ve ended the inning. 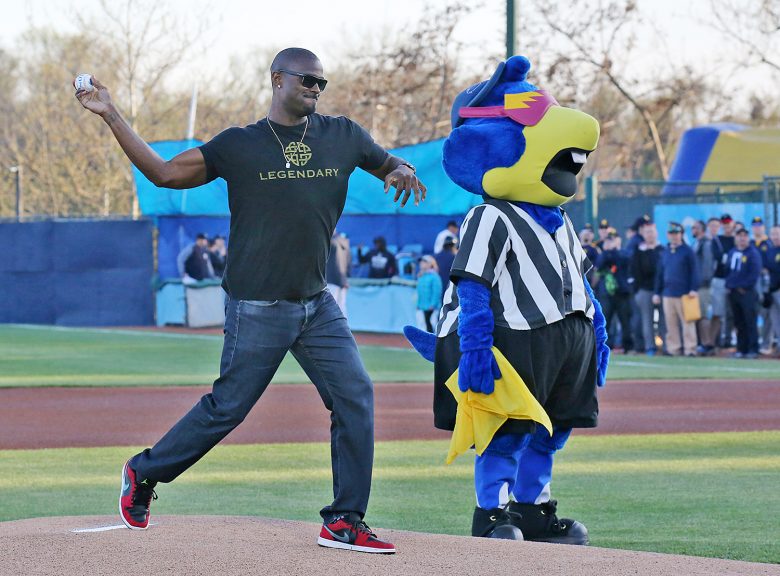 With Trenton Thunder mascot Boomer at his side, former Super Bowl champion wide receiver Plaxico Burress throws out the Ceremonial First Pitch of a game against the New Hampshire Fisher Cats as part of NFL Night at ARM & HAMMER Park on Tuesday, April 18, 2017. (Martin Griff)

An eighth inning rally saw the Thunder send nine batters to the plate and record six hits to grab the victory. Billy Fleming put the Thunder in front with a single and Thairo Estrada, Miguel Andujar, and Mike Ford each added RBI’s later in the frame.

With his eighth inning hit, Ford extended his hitting streak to ten games and Andujar continued his blistering pace to begin the season with his 14th RBI in his 11th game. 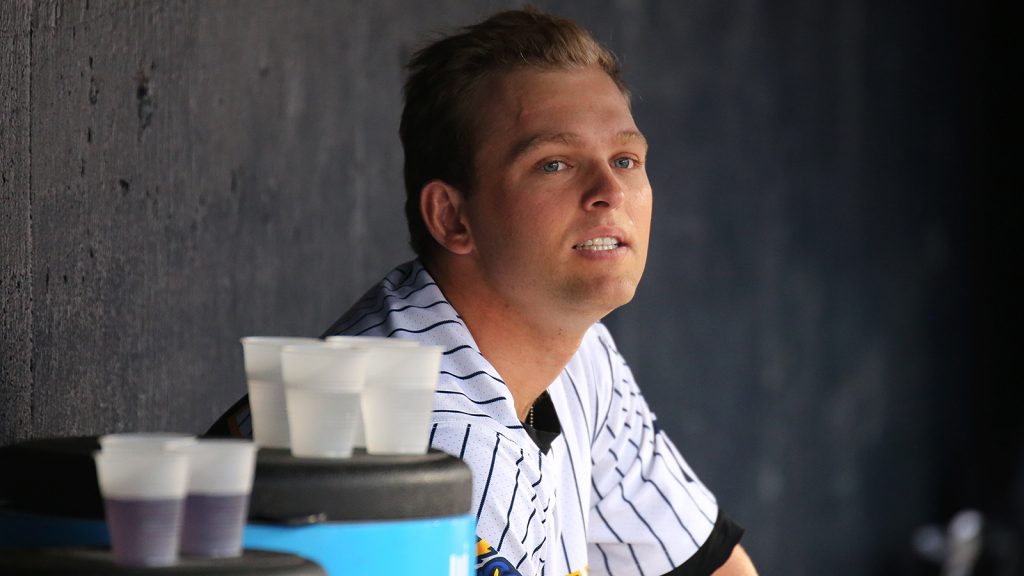 Trenton Thunder starting pitcher Chance Adams in the dugout against the Portland Sea Dogs in Trenton on Thursday, April 13, 2017. He is scheduled to start again on Wednesday, April 19.  (Martin Griff)

Your Thunder continue their homestand on Wednesday night at 7pm against the Fisher Cats. RHP Chance Adams (2-0, 0.79) will start for the Thunder, RHPConner Greene (0-1, 4.82) will go for New Hampshire. Wednesday is Baseball Bingo presented by Deborah Heart and Lung Center and half-priced wine! Tickets are available by phone at 609-394-3300 or online at TrentonThunder.com.

Wednesday’s game will air on 920AM The Jersey and online at TrentonThunder.com/Broadcast.