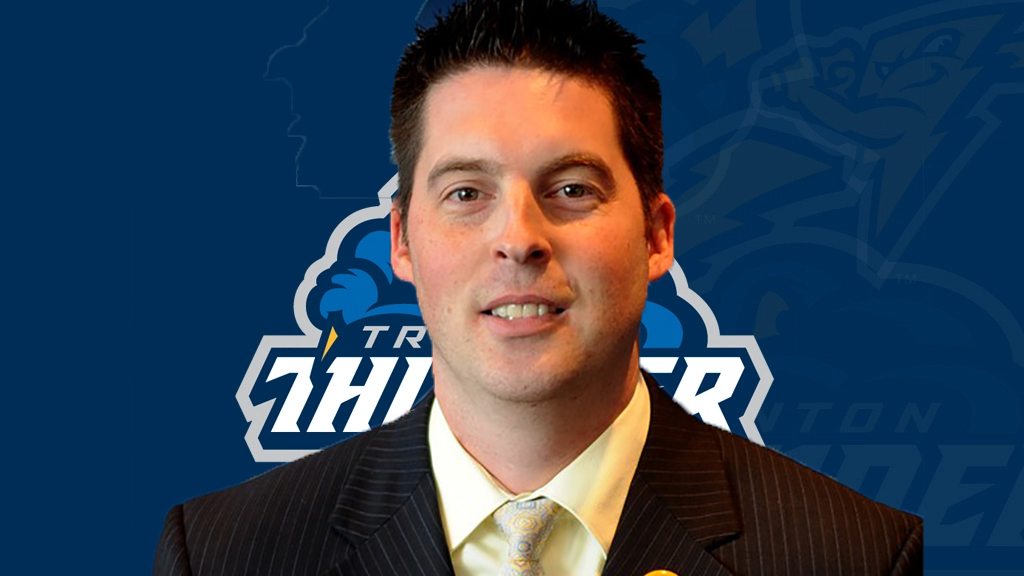 TRENTON, N.J. – Jeff Hurley, one must admit, is quite prepared to take over the General Manager’s chair in Arm&Hammer Park.

Hurley, 33, a native of nearby Hamilton, was named the fifth general manager in the Double-A Trenton Thunder’s 22-year history Tuesday afternoon. He succeeds Will Smith, who, after seven years with Trenton, will join the Staten Island Yankees ownership group Nostalgia Partners as President of the club and Operating Partner Sept. 8.

“I started as an intern, then ended up working in media relations, community relations, baseball operations and accounting,” said Hurley. “This year Will promoted me to CFO.

“The (Thunder) owners came to me and asked if I wanted to apply. I’m real excited to run an organization that has had 22 years of success.”

And that ownership found the best candidate right on its staff.

“After conducting a nationwide search over the last few weeks, we found that the right person for us was already a member of our family,” said Thunder President Joe Finley. “Jeff brings the right combination of experience, energy and expertise, and we are excited to have him lead the Thunder into our next chapter.”

Hurley worked under previous Thunder GMs Rick Brenner (now with the New Hampshire Fisher Cats), Brad Taylor (now with the El Paso Chihuahuas) and Smith. Brenner hired him for his first full-time job after he graduated from DeSales University in Allentown, Pa., after serving as an intern.

From there, he moved up the ladder with the Yankees’ Double-A affiliate.

“Rick hired me, then Brad promoted me and Will made me CFO this year,” said Hurley. “I got a chance to sit and shadow all three of those guys and learned a lot. I’ll likely take something from all three in what I do with the Thunder.

“All three were in the minor leagues working before I ever got here.”

For Hurley, becoming the face of the franchise he cheered for as a Hamilton kid, then playing at then-Mercer County Waterfront Park as a high-school and American Legion player, is something of a fulfilling experience.

He was a top pitcher at neighboring Steinert High, graduating in 2000, and with Hamilton Post 31’s perennial powerhouse American Legion team.

“It’s really feel like I’ve come full-circle,” Hurley said. “I came to games when I was young, then got to play on this field with both Steinert and Post 31. I think it’s really great a local guy is the face of the Trenton franchise for the first time.

“Both (veteran Post 31 coach) Rick Freeman and (Steinert coach) Brian Giallella came to the press conference. It was great.”

Hurley is the beneficiary of an excellent staff and he appreciates it.

“Most of our directors have been here for awhile, and they are more than capable,” he said. “I’ll be hands-on and involved, but we have a great staff. They all do excellent jobs.”

He wishes Smith the best in his new position.

“Will was great to work with the last seven years,” said Hurley. “I wish him and his family well. We won’t be strangers and I’m glad he’s still in the Yankees family.”

Given his contacts in Hamilton and Mercer County, the franchise could definitely benefit from a local guy heading up the operation.

“My number one goal is to make the Trenton Thunder better,” Hurley said.

Hurley is a resident of suburban Robbinsville, where he lives with his girlfriend, Kacie and their dog, Maddux, who was adopted through the NorthStar Vets Dog of the Day program three years ago.