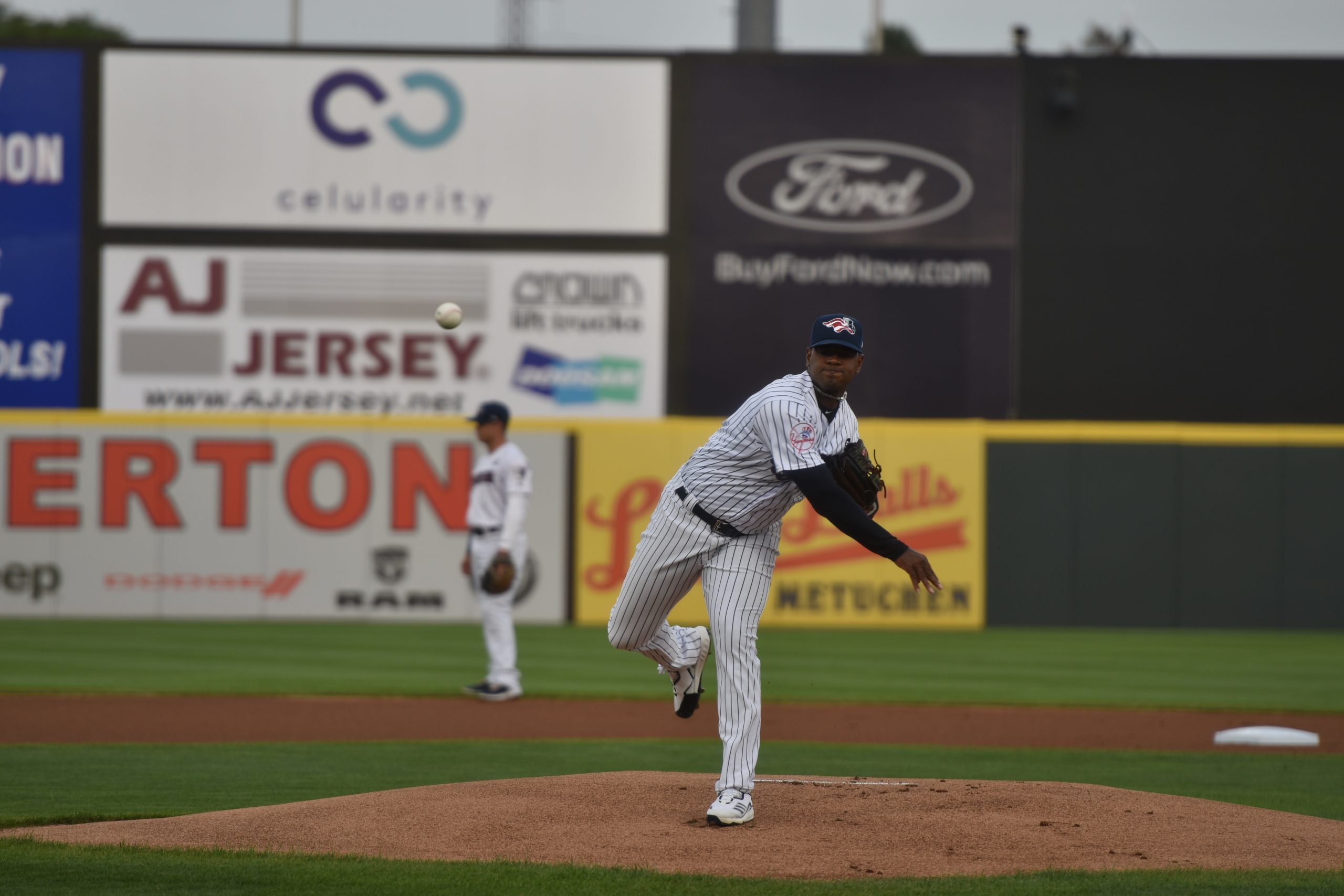 Luis Severino pitches for the Somerset Patriots in a rehab start on August 3rd, 2021. Photo by Chris Jones.

As the Yankees look to climb out of a deficit in the standings and fight back into the thick of the postseason race, they are banking heavily on the health of right-handed pitcher Luis Severino for the stretch run. After tossing two bullpen sessions at TD Bank Ballpark over the last few weeks, the 27-year old Severino started for Somerset on Tuesday night against the Bowie Baysox looking to take the first step in making an eventual return back to The Bronx.

Bowie forced Severino into a laborsome first inning in which he needed 30 pitches to navigate through. In the frame, Severino issued a walk and surrendered two hits, including a long two-run homer over the right field wall to baseball’s top-prospect, Adley Rutschman.

In all, Severino settled in after that first inning and went 2.1 innings in his 43 pitch outing, 28 of them for strikes. He allowed just the two first inning runs on two hits and one walk while striking out four batters, three of them looking. Scouts had Severino clocked between 93-96 MPH on the radar gun throughout.

“He was a little nervous in the beginning,” Mosquera added. “It was his first time in about a month and a half now and the first time that he has pitched at night in about two years. It was a little bit different of a routine and he settled down afterwards, so it was good.” 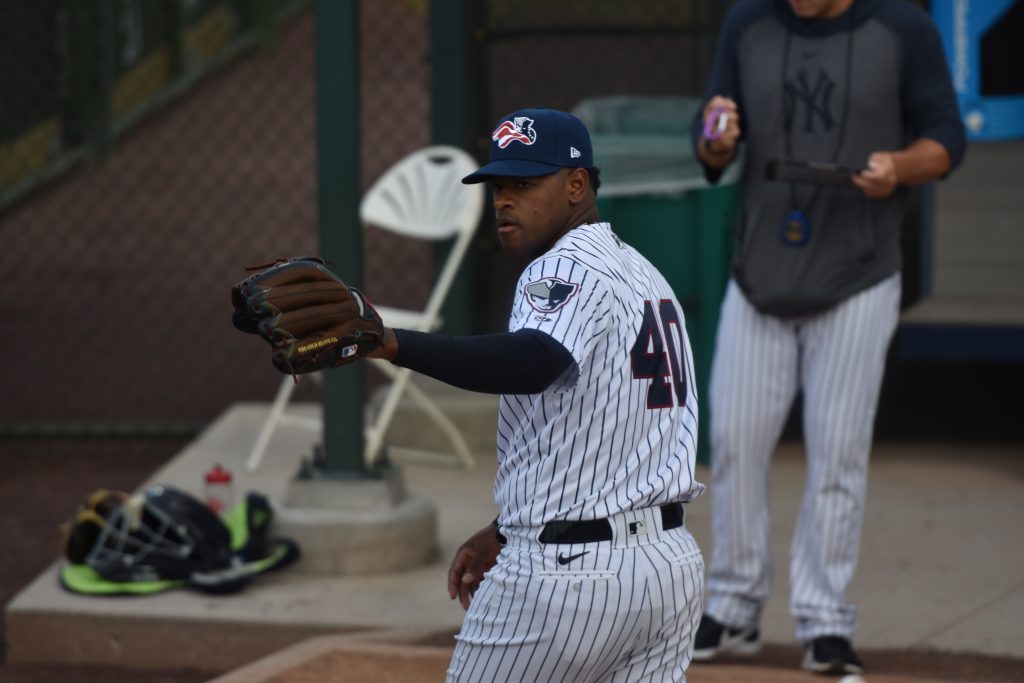 Luis Severino warming up for the Somerset Patriots. Photo by Chris Jones.

Highly-touted catching prospect Josh Breaux was promoted to Somerset on Tuesday and drew Severino as his first assignment. The 23-year old slugger was impressed by Severino and thought he looked strong in his first rehab start.

“I thought that he [Luis] looked great,” said Breaux. “He was spotting up and was executing his pitches really well. It was really fun to catch him for the first time.” 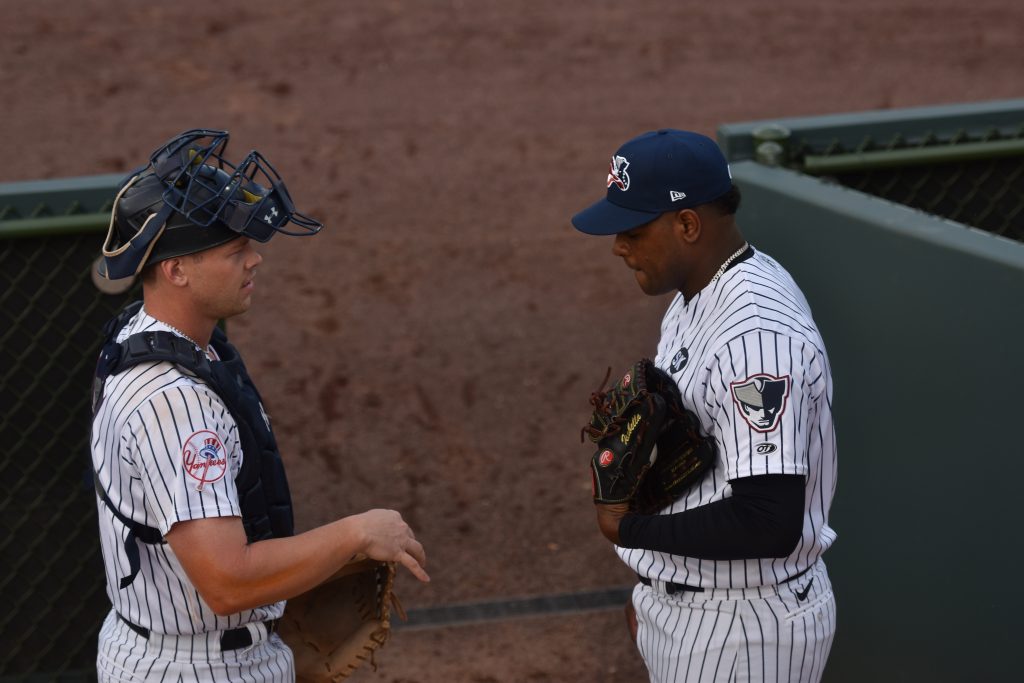 The Yankees inked Severino to a 4-year, $40 million extension prior to the 2019 season, but the two-time all-star has made just two starts and pitched 12 regular season innings since then. Severino missed just about all of the 2019 season with various injuries including rotator cuff inflammation in his right shoulder and later a Grade 2 lat strain. Severino was then shut down in February of 2020 and shortly thereafter underwent Tommy John Surgery that has forced him out of big league action since.

The timeline that the Yankees had for his recovery put him on a trajectory to rejoin the big leagues by the start of July, but Severino strained his groin in the second start of his initial rehab outing while pitching for High-A Hudson Valley back on June 12.

On regular rest, Severino would be due to pitch again on Sunday. Mosquera said he was not aware when and where the hurler would make his next start at this time.