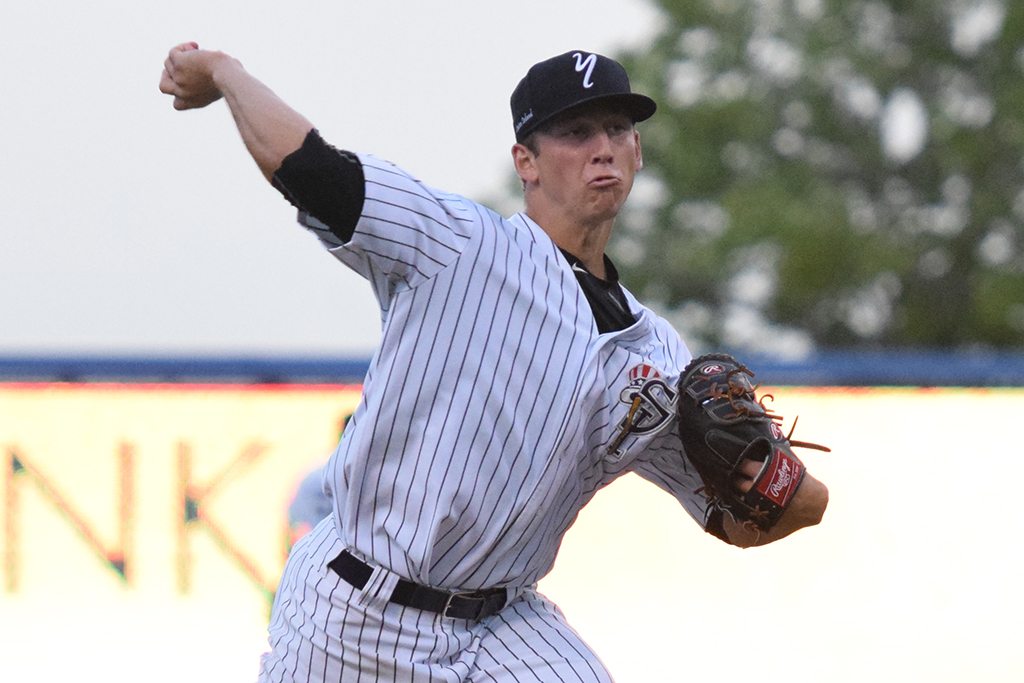 Last week we brought back our off-season Yankees prospect mailbag.  We asked out followers all week to send in their questions about the New York Yankees minor league system and many did just that.  This week we talk about Jorge Mateo, Ty Hensley, James Kaprielian and more!

Ramón Gómez: Does Cesar Vargas has a chance to debut soon?

Cesar Vargas is one of the Yankees most underrated pitching prospects, he originally signed in 2009 at 17-years old as an International Free Agent and this past season was his seventh season in the minors.  That means he should become a minor league free agent, there is always a chance the Yankees re-sign him but it Is likely another team will pick him up and give him a shot.  At 23-years old he is still young and pitched well in Double-A this year.

Matt: If Didi Gregorius continues to improve the way he did this year and earns himself a contract extension, could Jorge Mateo be moved to 2nd base when he’s ready to come up in a few years?

Right now the Yankees do not have any plans on moving Mateo over to second base.  Jorge is a one of a kind talent that not only as the potential be a major league shortstop but an impact player.  They had him work on the right-side of second this year at instructs but that was to get used to the shifts he will see in the upper-levels.  It is my belief that once Mateo reaches the upper levels of the minors you will see Tyler Wade move over to second base full time to create a double-play combo that can develop hopefully into a long-term major league option.

Tom Tursich: Austin DeCarr. He opened last year in the GCL. Was he injured this year?

Austin DeCarr was originally slated to open the 2015 season with the Staten Island Yankees but shortly before the start of the season in June he went in for Tommy John surgery.  He is currently recovering and is already feeling better than before he went under the knife.  He should be back in game action come June 2016.

Ben Rosenberg: What is deal with prospects Renzo Martini, Dominic Jose, Caesar Diaz? All three have put up very good numbers in two years. They don’t look like they are getting any love.

You can call these three guys organizational prospects, they are players that can fill-in when and where they need them to.  Martini hit well in the Gulf Coast League but has struggled to hit above Rookie-ball, he also bounces around positions, playing where the team needs him.   His versatility is an important tool for him as it is something needed in the minors.

Diaz is just in his second season with the Yankees and has played all over the outfield and even second base.  He has hit extremely well in the GCL and is likely to see time in a higher level in 2016 but he is already 22 years old and has yet to play above Rookie-ball.

Jose on the other hand is a prospect that fans could be hearing a lot more about.  He was a 24th round pick in 2014 out of Stanford.  He comes from a baseball family, his father was former Yankee Felix Jose, and he has had a small amount of success in Charleston in 4 games and has played all 3 outfield positions.  It will be interesting to see what he does next year.

Brendan: The Yanks spent big in 2014 on international FA’s.  How is the class of 2014 progressing?

The 2014 IFA class made their professional debuts this season and several had pretty good years especially Wilkerman Garcia who hit .299 across 39 games between the DSL and GCL Yankees.  Danienger Perez was the first to play about Rookie-Ball after he played 4 games for the Staten Island Yankees.  This would be a great topic for an expanded feature where we can go into more details on each player.  Keep an eye out in the coming weeks.

Jim Demotses: Any chance of a position change for Gary Sanchez to take advantage of his offensive skills?  If he has the soft hands of a catcher and a strong arm why not try him out at third?  Is he a good enough athlete to make that kind of change?

Personally I do not see Sanchez making a position change with the Yankees.  He has matured and shown he can handle the duties of a catcher.  It is my opinion that he would best serve the Yankees as a trade chip this off-season, there is a better chance he finds himself at another position if he was with another organization.  I don’t think he has the athleticism to move over to third base, the more likely scenario would be first base.

Mike: If the Yankees were to sign Jayson Heyward or Justin Upton, what would that mean for Aaron Judge? Would he be traded?

It would be an interesting situation if the Yankees were to sign either of those guys.  Personally I do not see it happening.  The Yankees currently have a right fielder in the majors in the person of Carlos Beltran.  The expectation is that once Beltran’s contract is finished at the end of the 2016 season that Aaron Judge would be ready for an everyday spot in the majors.  Signing Upton or Heyward would go against their current philosophy of getting home grown talent to contribute.  Heyward would be the only exception I would make as he is young and can contribute now.  The big question is what would that signing mean for Carlos Beltran or even Brett Gardner.  Could Heyward or Judge move to left field?  It would present an interesting situation, one that would leave the Yankees better than they were before.

Jorge Martinez: How is Ty Hensley doing? Is he healthy already? Are we going to see him pitch in 2016?

Hensley is currently recovering from Tommy John surgery.  He should back in action in mid-2016.

Paul: What’s the ceiling for Kaprielian next year? Can he make it to AAA?

There is a lot to like about James Kaprielian and I he continues to develop as much as he has already there is a chance you see him in the majors in 2016.  As of today he already possess a big league fastball and changeup, a scout I talked to told me that there is a very good chance we see him in the big leagues quickly.

That is it for this week’s Pinstriped Prospects Mailbag, if you have questions about the Yankees minor leagues submit them at this link and you could be featured!