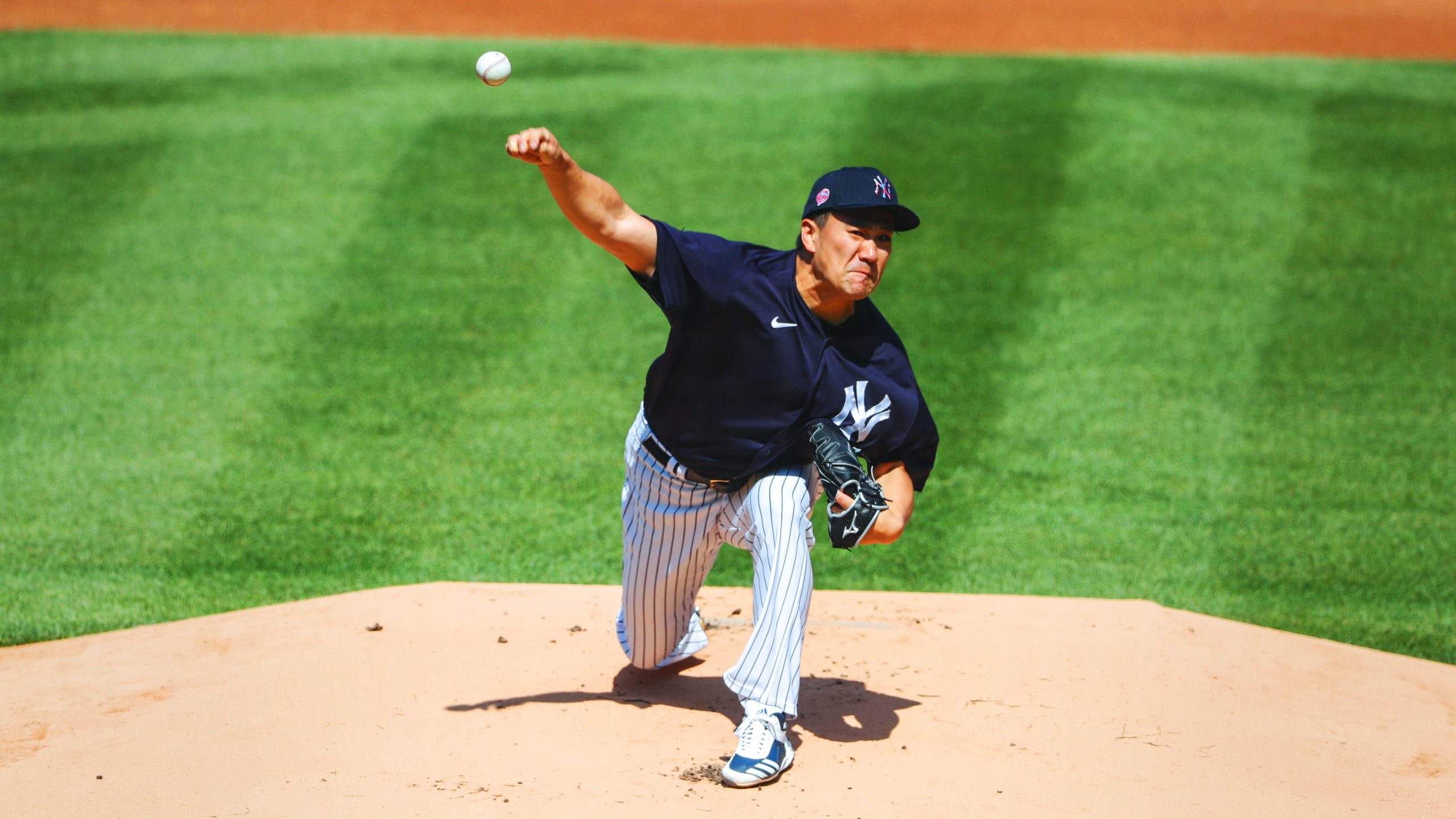 It was a scary afternoon at Yankee Stadium during the first day of full-team workouts for the Yankees as right-handed pitcher, Masahiro Tanaka was nailed in the head by a screaming line drive off the bat of teammate, Giancarlo Stanton during a live simulated game. Tanaka was knocked to the ground where he remained for close to five minutes while the medical and coaching staff tended to him on the field. Tanka was conscious, alert, and responsive on the field. He did eventually walk off the field on his own power.

Tanaka was taken to New York-Presbyterian Hospital where he was evaluated for a few hours and underwent a thorough battery of tests, including a CT Scan that came back negative before being released from the hospital. Tanaka was displaying concussion-like symptoms prior to being taken to the hospital, however, according to Manager, Aaron Boone, Tanaka is doing well and all tests checked out well. His concussion symptoms have subsided and he is doing well. He has since been released from the hospital.

Tanaka later posted a tweet stating, “I appreciate all the support. I feel it a bit right now, but I’m all good. Going to try to get back on the mound ASAP! Thanks again for the encouraging words!”

I appreciate all the support. I feel it a bit right now, but I’m all good. Going to try to get back on the mound ASAP! Thanks again for all the encouraging words!

Aaron Boone, Jordan Montgomery, and Aaron Hicks were all asked about that moment on the field today and each responded with how scary and terrifying it was. “Anytime you see that on a baseball field and at the layer that it’s a teammate, it stops you in your tracks,” stated Boone. “Anytime you have something like that happen… you worry about a guy’s life. Immediate focus and reaction is hoping and praying that he’s ok.”  Left-handed pitcher, Jordan Montgomery was the next pitcher on the mound for the Yankees and as to be expected, was a bit shaken up taking his spot on the mound for live batting practice. “It’s horrible… I was finishing up my bullpen and getting ready for my life,” stated Montgomery. “It’s terrifying. You never want to see anyone, especially a teammate hurting.” Montgomery then chose to use the L-Screen for his live BP session.

Center fielder, Aaron Hicks also reiterated the scariness of the situation of Tanaka going down. “It sucks to see something like that, especially during something as simple as a SIM game,” stated Hicks. “As soon as you step onto the field, anything can happen. It sucks that it happened to him.”

Boone also stated that Stanton, who’s line drive knocked Tanaka to the ground, is also doing well. “Right away we were checking on “G,” stated Boone. “He was somewhat ok and a little relieved to see him walk off. We let “G” know a little later that he (Tanaka) is doing well. He seemed to handle it as good as can be expected,” stated Boone.

While it was a scary afternoon, day one of camp did progress forward and Jordan Montgomery and Aaron Hicks both worked out.

When asked about training in an empty stadium, Montgomery told reports that it’s definitely different. He compared training in an empty George M. Steinbrenner Field during closed workouts to this situation saying that he’s trying to stay focused and get his work in. “Everyone is pretty locked in and excited to be here,” stated Montgomery who had no doubts or hesitations to play this year. 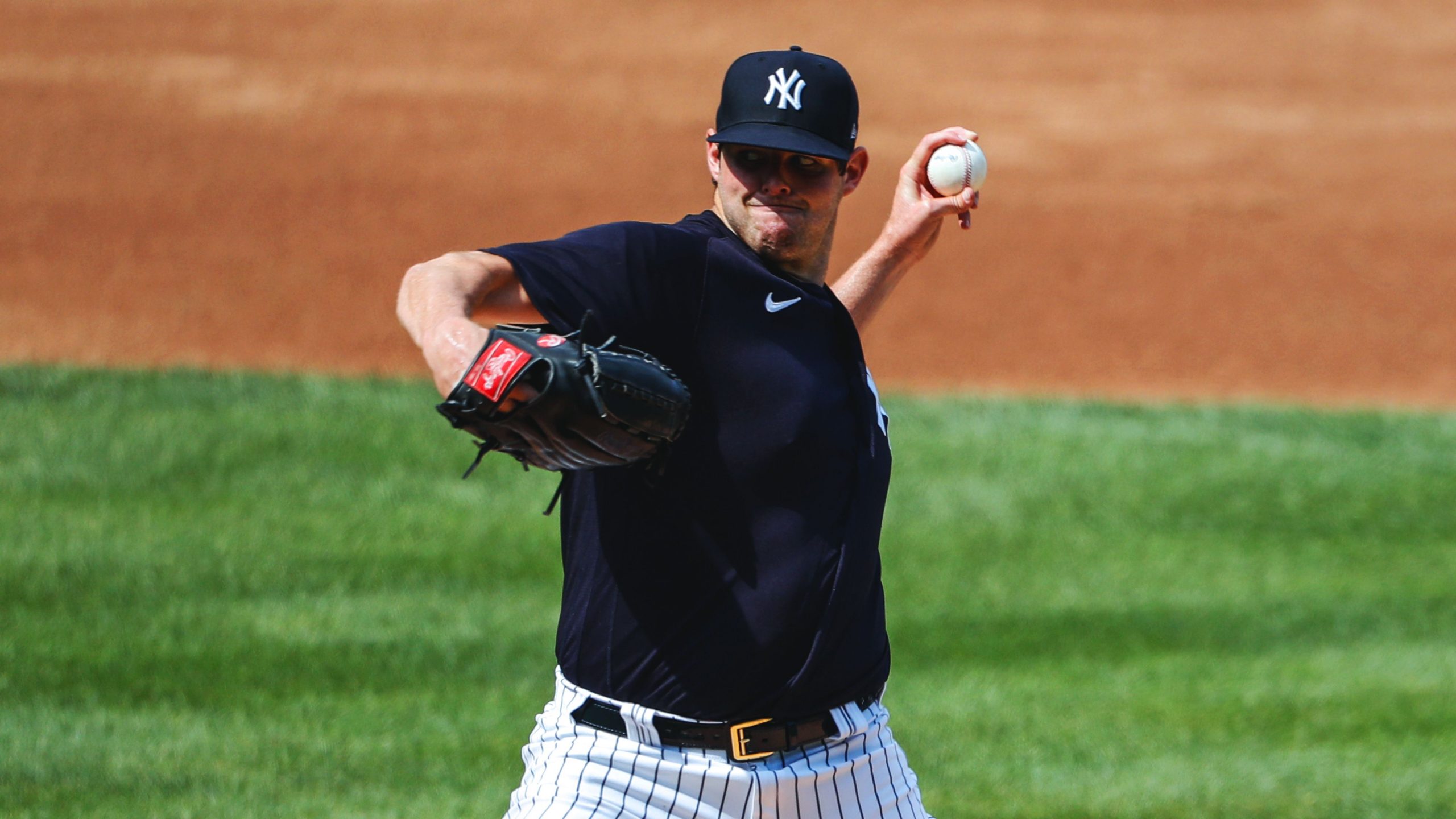 During the break between Spring and Summer Camp, Montgomery was able to keep training at home, throwing with his local throwing partner, left-handed minor league pitcher, Charlie Barnes from the Minnesota Twins. “We know enough people around town that we had a place to throw and a catcher, “ stated Montgomery who expressed his gratefulness to be around his coach and get more comfortable throwing again after two seasons away from the game due to Tommy John Surgery in March of 2019.

Aaron Hicks, also coming off of an injury (Hip Flexor Strain) that sidelined him in 2019 is back to training on the field and said his hitting and throwing is going well. He stated that he feels stronger every day and his recovery and progression process has been really good and really quick. “I’ve been able to throw longer and harder as my progressions move forward,” state Hicks who also says he is able to now lift heavier weights as well. “I feel really good and game ready right now,” claimed Hicks who says he’s ready to compete and play good defense. 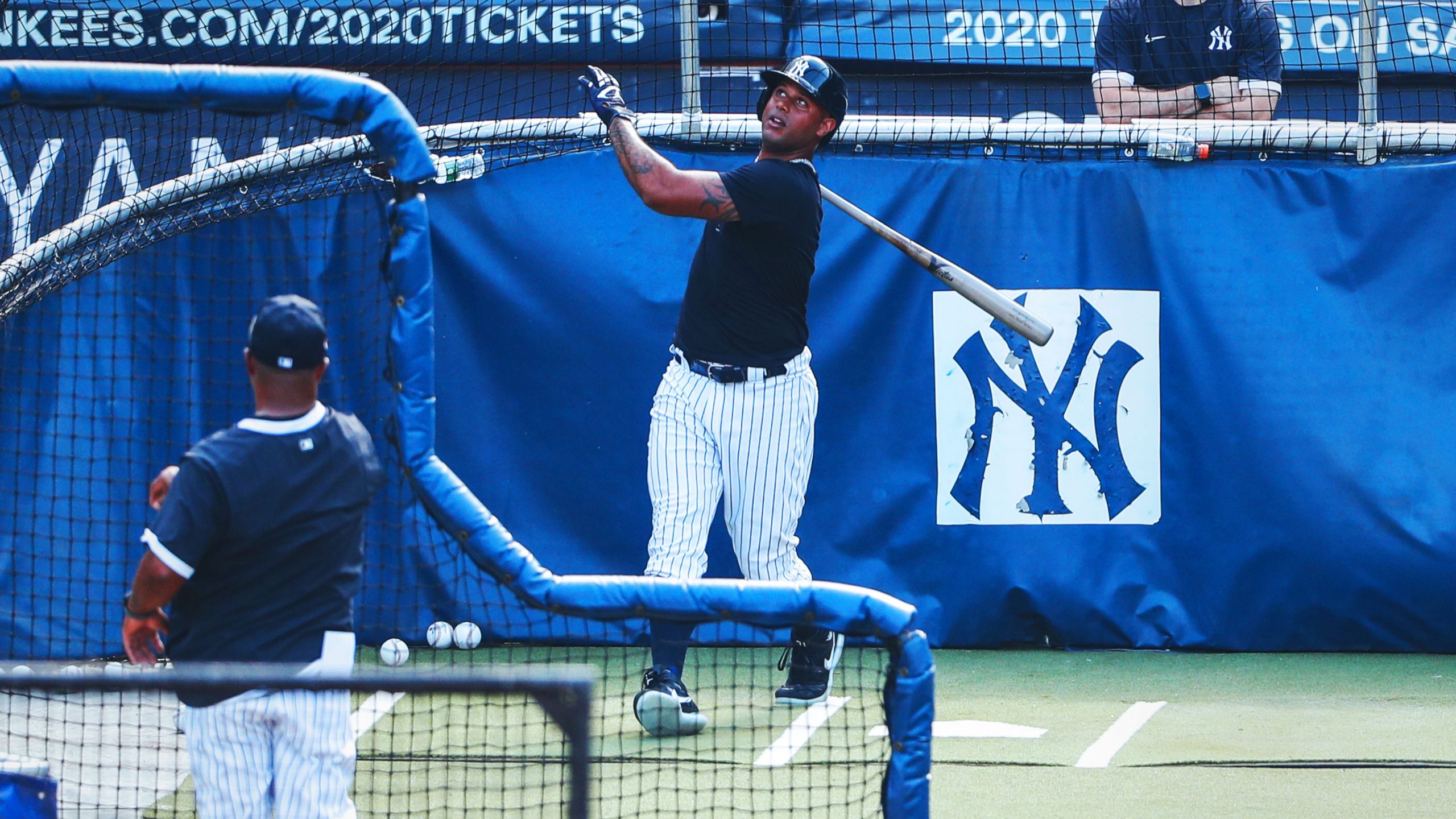 Hicks, a father of a young family, was also asked about his decision to play and stated that it was a tough decision. His children stayed home with their mom and are not in New York. Hicks stated that he has to be aware of what he’s doing and cautious when balancing working out, going to the field and what’s he’s doing on a daily basis. Hicks stated that being in New York and getting back to work and being able to do his job and come and play baseball is important.

Day one of official full-squad practices are in the books. Boone stated that Tanaka getting hit took a little air out and put some fear in the guys, but operationally, the Yankees are in good shape. They’re in a good spot facility-wise and getting the reps in that they need.

The Yankees return to the field tomorrow. Pinstriped Prospects will continue to bring you reaction, interview and press conference recaps,  and video from Yankee Stadium as the Yankees work their way to their July 23rd season opener in Washington.