It is becoming increasingly clear that the Staten Island Yankees will be no more. (Robert M. Pimpsner)

Over the last few weeks, there has been a lot of news about the future of minor league baseball in the United States. While the long-term outlook is still murky, there is a more precise picture forming with the reports coming out of Baseball America, ESPN, and others.

After a brief bit of drama when Minor League Baseball president and CEO Pat O’Conner dismissed the initial negotiating committee to create one that would be more in line with his interests than that of the owners of teams, there has been movement. The second negotiating team has been replaced by one that consisted of a lot of the same people as the initial team but also included a couple of new names that may be more sympathetic to the MiLB office.

Minor League Baseball and Major League Baseball met for the first time since April 22 in late August to continue negotiations on the new professional baseball agreement. In those talks, MLB outlined their plan for the future of the minors. In that plan, the fundamental basis of the minors will be changed completely. After the initial release of the news that MLB will be seeking a contraction of MiLB teams from 160 to 120 in the new agreement, there was a significant amount of public and political pressure on MLB to reconsider, but all of that leverage has evaporated in large part due to the COVID-19 pandemic. This leaves minor league owners more likely to give in to MLB’s demands which include the complete dissolution of the MiLB office in St. Petersburgh and all minor league operations being run by the MLB office in New York City, along with the contraction to 120 teams.

One noticeable thing absent from the proposal from MLB was the idea of the “Dream League” which was proposed when the news broke in October. The “Dream League” would have become a quasi-independent/college league that operated in the northeast and featured mostly teams that made up the current NY-Penn League. That proposal seems to have been dropped and teams that are expected to be contracted encouraged to either become wood-bat summer leagues or join currently operating independent leagues. 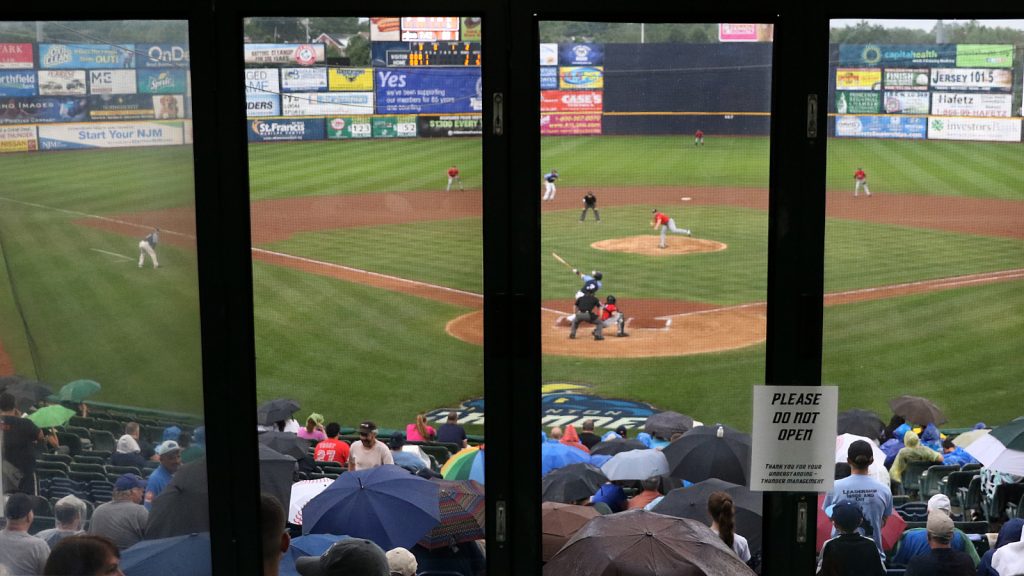 With the rumor circulating about Somerset becoming a Yankees affiliate, there is an expectation that Trenton may drop classifications or change affiliates. (Martin Griff)

The pandemic has been devastating to many minor league teams with many having to furlough employees to survive and combined with the uncertainty about the future of the minors has led to a perceived loss of valuation in the minor league clubs with all sales essentially having been suspended until a deal is made. Many teams may not survive if they do not receive some kind of financial assistance let alone if they are forced to provide their own players and coaches, something that easily adds up to $500,000 in expenses each year.

In the proposal from MLB, the rookie-advanced and short-season Class-A leagues will be eliminated and make up the bulk of the teams expected to make up the list of contracted teams. This will leave each MLB team with one team at each of the four full-season leagues, leaving a total of 120 ticket-selling franchises available in the minors. In the initial plan leaked in October, each MLB team was to be limited to just one complex-level team in the United States in either the Gulf Coast League or Arizona League. However, it seems now that the MLB teams will be allowed to have multiple teams in the complex league which means the Yankees will lose just two 35-man roster teams instead of three. These teams play out of the minor league complexes and do not sell tickets, concessions, or merchandise.

The news the past two weeks of the 2021 MLB Draft to be apart of the All-Star Game festivities in mid-July is a sign that the contraction will happen. In the past, the rookie and short-season leagues were dependent on the draft to provide the bulk of the talent that appeared on the rosters. This means that the 2019 season was the final season for many of those teams as they will likely not be able to make it work financially to operate as an independent team. Some teams will be joining one of the full-season leagues that survive but the list of teams that will survive is not known as of now and likely will not be known until the last minute.

MLB and Rob Manfred is in the middle of a push to exercise control over every aspect of the sport of baseball. The term “One Baseball” was coined to represent the goal of having everything baseball fall under the control of the MLB office including the minors, USA Baseball, the MLB Draft, Little League Baseball, independent baseball, and more. MLB achieved a big win in that goal when they entered into a deal with the independent Atlantic League to test out rule changes, a move that caught many in MiLB off guard. The minors have always been a testing ground for new rules in baseball but the agreement with the independent league changed that.

The big change in the proposal from MLB was the elimination of the separate MiLB office and all operations being from the NYC offices of MLB. In MLB’s view, they can operate the business side of the minors in a much more efficient way than they can on their own. The change would also mean the end of player development contracts as we know of. Instead of contracts ending every two or four years, the minor league teams will enter into a franchisee-franchisor agreement with an MLB team that could last up to 10-15 years. MLB teams will have all the leverage over MiLB owners and enforce strict upgrades to travel and stadium amenities for players. In MLB’s plan, minor league teams will have fewer costs as it eliminates the need for league offices and the expenses they occur. The 8.5% ticket tax would remain with all of it going to MLB as well as a 50/50 split between MiLB teams and MLB in the money brought in from national sponsorships, broadcasting, licensing, and digital rights which MLB would sell.

Along with greater control over the day-to-day operations, there is an expectation that stadium and travel standards will be raised. This is something minor league baseball executives have long believed will happen. Many teams will have to invest significantly in upgrading their player facilities, this is coming after a pandemic-induced recession that has hurt all teams. Many stadiums like the Richmond County Bank Ballpark, which currently meets all stadium standards in the current agreement, will likely fall far below the standards that will be set. In talking to player development people with several teams it is expected that for the top levels at least there will be a call for expanded workout facilities, separate indoor hitting and pitching facilities for home and road teams, as well as larger clubhouses, separate locker rooms for female coaching and support staff, separate player lounges, and sleeper buses for road trips. Some other things that are being considered for upgraded stadium standards include better lighting for night games, moving bullpens out of play (if possible), and more.

With the expiration of the current agreement coming up at the end of the month the power is all in MLB’s hands. This means that the era of an independently operated minor league baseball is over. There are still a few ideas that have been floated out there including flipping the level classifications of the current Class-A and Class-A Advanced leagues, allowing foreign players an easier time to adjust to playing in front of people, night games, etc. The other interesting idea that is floating around includes splitting the season of Florida and Arizona-based leagues with the first half of games being played in Florida and Arizona and the second half being played in the cities that made up the current NY-Penn League or Northwest League.

The only two current Yankee affiliates that are guaranteed to keep their affiliation with the Yankees is the Triple-A Scranton/Wilkes-Barre RailRiders and the Class-A Advanced Tampa Tarpons. While Trenton, Charleston, and Pulaski are not expected to be contracted there is no guarantee of those teams keeping their affiliation with the Yankees or remaining at the current level they play at. Staten Island is the only team in the organization that is at a high risk of being eliminated from the affiliated ranks all-together. The team is in an unfortunate position due to being sandwiched between two major developments with no space to expand the stadium in a cost-effective manner.

It has long been rumored throughout 2020 in baseball circles that the Yankees have eyes on Somerset to become a potential affiliated team, the Patriots currently play in the Atlantic League and outdraw the Trenton Thunder by about a hundred fans per game. They also play in a newer stadium that is more appealing to MLB teams. If Somerset were to get the Yankees Double-A affiliate, there is still a chance Trenton could remain a Yankees affiliate at the Class-A level. The expectation is a new Mid-Atlantic League to be created operating in the Northeast as a Class-A league and could be home to the Yankees affiliate.

For all we know about the future of Minor League Baseball after September 30 there is an equal amount we do not know. This has made planning difficult, usually, by now the schedules for the next season would have been created and announced, promotion planning would be underway, etc. but as of now all, that will have to wait until an agreement is made and ratified between the two groups. The only thing we can do is wait and see what happens.