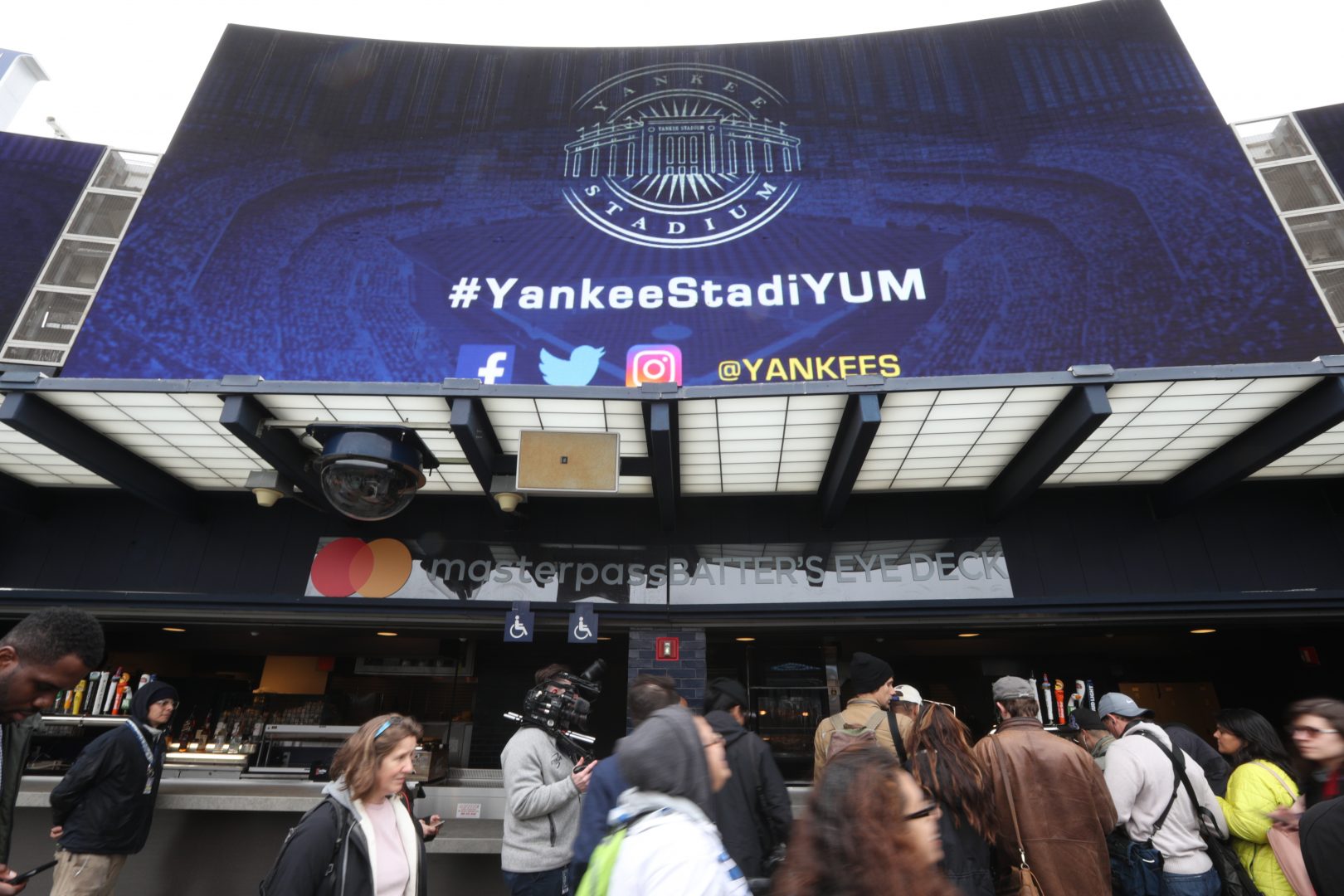 As a result of the new configuration, 2,000 seats were removed; however, those included all of the 1,100 obstructed-view seats in the bleachers — as well as 600 seats in the Terrace Level.

The changes will also allow for an additional 200,000 single-game tickets to become available for fans throughout the 2017 season.

The 200,000 additional tickets will be part of the Yankees’ two new “value-price ticket” options this season. The “Pinstripe Pass” ticket (starting at $15 for select games) will be a general admission – standing room only – ticket, which will also include one drink from: a Pepsi product, a bottle of water, or one 12-ounce domestic beer for fans 21 and older. Anyone with this ticket will be able to watch the game from any of the non-assigned standing room locations in the Stadium or from any of the new social gathering sites. For information on the Pinstripe Pass, visit: www.yankees.com/pinstripepass.

The other value-price ticket option that will be available throughout the 2017 season is the “Grandstand Level” ticket. The Yankees will offer $10 Grandstand tickets for every regular season home game in select Grandstand locations, but quantities of these tickets will vary for each game.

The seven new social gathering areas in the Stadium will be: 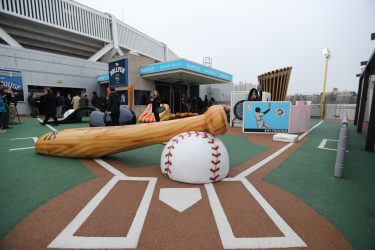 Sunrun Kids Clubhouse – A 2,850 square-foot area located on the 300 level in right field that is shaped like a mini baseball field and is filled with Yankees-themed playground equipment, tall baseball card face cutouts, a six-foot high World Series trophy replica, and interactive exhibits such as a mini-bullpen with a radar gun reading. The Kids Clubhouse contains two family restrooms with changing tables, and televisions broadcasting the game. Nursing mothers will also have additional private space with lounge chairs, televisions, and power outlets. No food or drink will be allowed in this space.

Masterpass Batter’s Eye Deck – Yankees fans may remember this area from previous seasons, however, it was just expanded to 3,500 square-feet. Located on the 200 level in straight-away centerfield, the eye deck now includes a larger seating and standing area with 88 drink-rails overlooking the field and 120 charging stations for phones and tablets. Any fans in this area will have the opportunity to purchase craft beer, cocktails, and some of the new food options.

Bullpen Terraces – Previously obstructed-view bleacher seats, the Frank’s RedHot Terrance (which overlooks the visitors’ bullpen in left field) and the Toyota Terrace (which overlooks the Yankees’ bullpen in right field) are located on the 100 level and will feature their own unique food and drink options. Each terrace is equipped with drink-rail locations at the landings that will all have power and USB outlets. 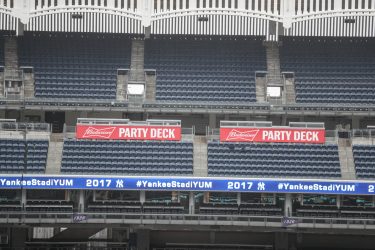 Budweiser Party Decks – Located in Sections 311 and 328, these spaces were previously occupied by stand-alone concession carts but will now be shaded open areas with drink rails and limited barstool seating. The party decks will offer beer, cocktails, and food. 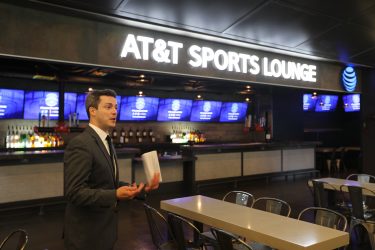 AT&T Sports Lounge – The sports lounge is located at section 134 on the field level and will provide a sports bar atmosphere inside the Stadium. Equipped with several TVs, all with DirecTV service, the sports lounge will not only broadcast the Yankees’ game going on in front of you, but it will also show other live sporting events. The sports lounge features a full bar with craft beers and cocktails and also provides power and USB charging outlets for fans.

All of these new gathering areas will open with gates 90 minutes before the scheduled game-start time and will be available to any fan with a ticket to the game.

“We didn’t have much pre-game entertainment from a group standpoint,” said Yankees spokesman Michael Margolis. “And now people can meet up and gather in a space that we didn’t have before.

“These new spaces now afford us that opportunity.” 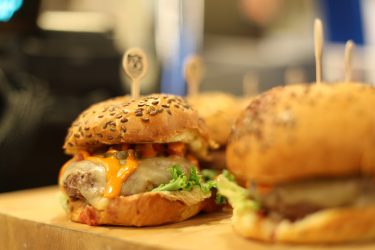 Some of the new food items that will be available to fans at the Stadium starting Monday (April 10) when the Bronx Bombers take on the Tampa Bay Rays in their home opener will include: a one-pound Brontosaurus beef rib, organic burgers from Bareburger, fresh mozzarella sandwiches, and four different kinds of traditional Chinese Bao.

“Not everyone wants to come to the Stadium and have chicken fingers and hot dogs anymore,” said senior executive chef Matt Gibson. “People are wanting to see other products here at the ballpark. And we wanted to make sure we provided a wide-variety of things.

“And for those with dietary needs, that is something that we consider very important. We make sure that everything we serve is produced in a facility where it won’t have any cross-contamination, as well as training out staff to make sure they provide the guests with a safe experience. And if anyone ever has any questions, they know they can find one of our chefs, and our goal is that everyone who comes in here and enjoys our food does so safely.”

A complete list of the new food items and where to find them: 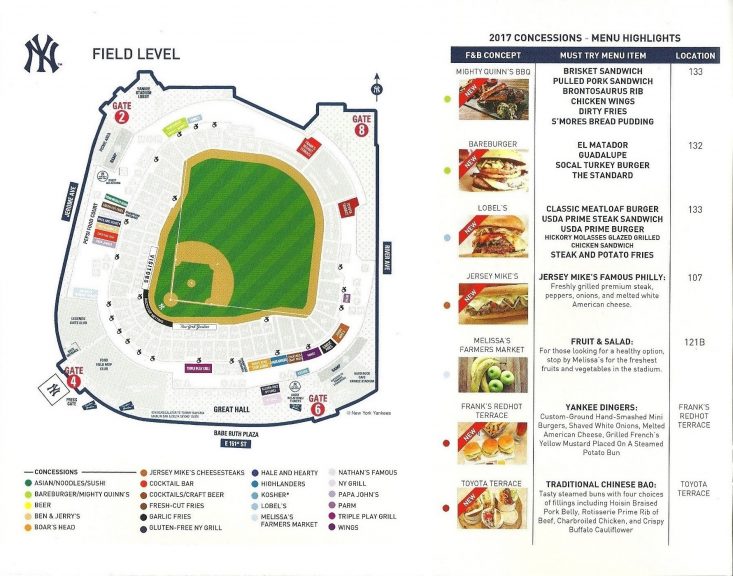 “We stay true to our fans,” Gibson said. “So, what we did was we listened to what they wanted, and we provided them with our opinion of what that was. And at the end of the day, that’s what matters to us.”