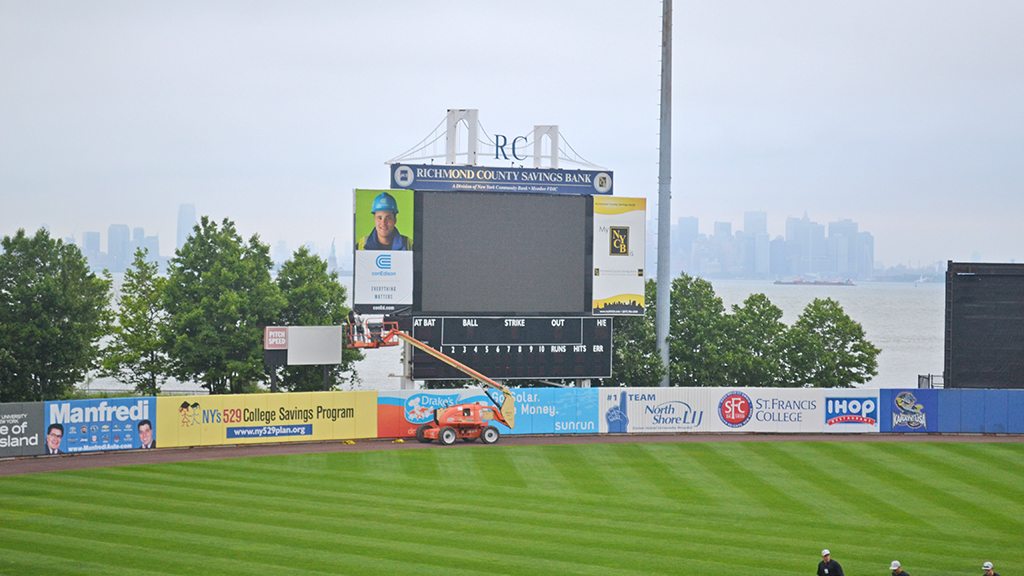 Working put the finishing touches on the scoreboard and new video board. (Robert M Pimpsner)

As fans enter the Richmond County Bank Ballpark tonight they will be greeted by several new additions and a new atmosphere. The first thing fans will notice is the brand new video board in left-centerfield.

“You are going to see a tremendous difference in the video board quality wise and what we do as well for fan interaction,” said Staten Island Yankees CEO Steve Violetta. The new video board is replacing a seven year old video board that was installed prior to the 2007 season when the team was taken over by Mandalay Baseball.

But that is not all the Yankees have in store for fans this season. The team worked hard this off season to get an expanded selection of food at the ballpark. In addition to Pier 76 returning the Richmond County Bank Ballpark will be home to some good ol’ fashioned barbecue thanks to local company Irishman’s BBQ.

“This year we’ve got Irishman’s BBQ doing strictly BBQ out of one stand, that is everything from brisket, pulled pork and ribs to a great concoction they have which is called the “Game of Combs” which is BBQ Chicken, garlic mashed potatoes and bacon in a sugar waffle cone.”

In addition to that fans will be able to find deep-fried s’mores, deep-fried Oreos and a new selection of craft beers.

This season the Yankees have one of the most ambitious promotions schedule the team has ever produced. It is highlighted by the now famous “Meet George RR Martin Night” on August 8 when the team will take on the moniker of the Staten Island Direwolves to face off against the Hudson Valley Lannisters. “It’s the first time that we’ve been able to figure out in minor league baseball were both teams have been themed out in uniforms. Usually it’s just the home team. A lot of guys have done star wars nights and spider-man night so whatever it might be but this is the first time we think both teams have themed out in the minor leagues”

While that is a little more than a month away the attention turns to tonight and Opening Day. Dwier Brown from Field of Dreams will be on hand and in addition fans will be invited to come out on the field for a catch after the game and there will be fireworks. Not previously announced though is a special giveaway by local Staten Island Pediatric Cardiologist Jared C. LaCorte. Children coming to the game tonight will receive a Staten Island Yankees scrub top. 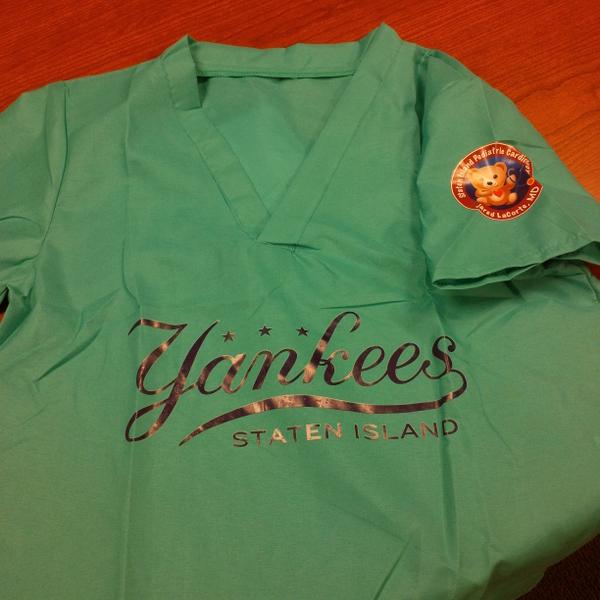 This July the Yankees will host #BeatBKLYN Night where fans will receive a special Beat Brooklyn hat brought to you by Rossi Paint. “We’re trying to take that Brooklyn rivalry up a notch. It’s a good rivalry but we want to have a little more fun with it.”

“Then we got big money Monday’s Every Monday this year we will be giving away cash prizes and other prizes but the potential for someone to win $25,000. We will be picking a fan at random every Monday and where there is a Grand Slam inning or a Triple-Play inning one fan is going to get a chance to win $25,000.”

On the concourse this year fans will be able to find something different. The Staten Island Yankees will be offering free charging stations where fans can charge their phones. The charging stations, supplied by Bright Box, offer a secure way for fans to charge their phones while the game is going on. Simply insert your credit card to unlock a box, plug in your phone and close the locker and you can go back to your seat or to the concession stands. The box will only unlock when you scan your card so no one else will be able to take your phone.

Tonight’s home opener will be an historic one for Staten Island as for the first time ever the team offered standing room only tickets, expecting to push attendance the sellout number of 7,171. With that combined with the limited parking options due to the construction of the New York Wheel and Empire Outlets fans are advised to come early. “If you can leave a little bit early, leave a little bit early to give yourself some extra time for parking. If you’re coming from the East on Bay Street my recommendation is going right to the municipal garage. I worked out a deal with them, they’re going to stay open for an hour past when the game ends. Its 8 bucks there just like it is in any of the lots.”

The Yankees have been working on the parking plan since November, working out deals with several lots in the area including two just behind the 120th Precinct across the street. “There’s going to be approximately 2,000 parking spots on any game night available.”

“In addition to that the Staten Island Yankees acquired eight parking ambassadors we are putting in bright bests with parking with a big P on the front. We’ve got our own signs we’ve made up with directional arrows, we are working with the NYPD they’re going to help staff it too. So there’s going to be plenty of people in and around the ballpark directing traffic as well. We think we’ve got a plan, we have rehearsed a couple times we think it’s a good plan buy like Mike Tyson famously said everyone’s got a plan ‘til you get punched in the nose.”

Staten Island Yankees CEO Steve Violetta is excited for tonight. “I think the thing I’m looking forward to the most is that first pitch, the sun is starting to set, we have a full house, brand new ball team, everybody’s excited, the new scoreboards fired up everybody’s got a cold beer and some BBQ or a hot dog and I’m just looking for that moment where we actually start to play the game.”

The changes are plenty at the Richmond County Bank Ballpark and with a renewed focus on fan experience and customer service the season is looking to be a good one.