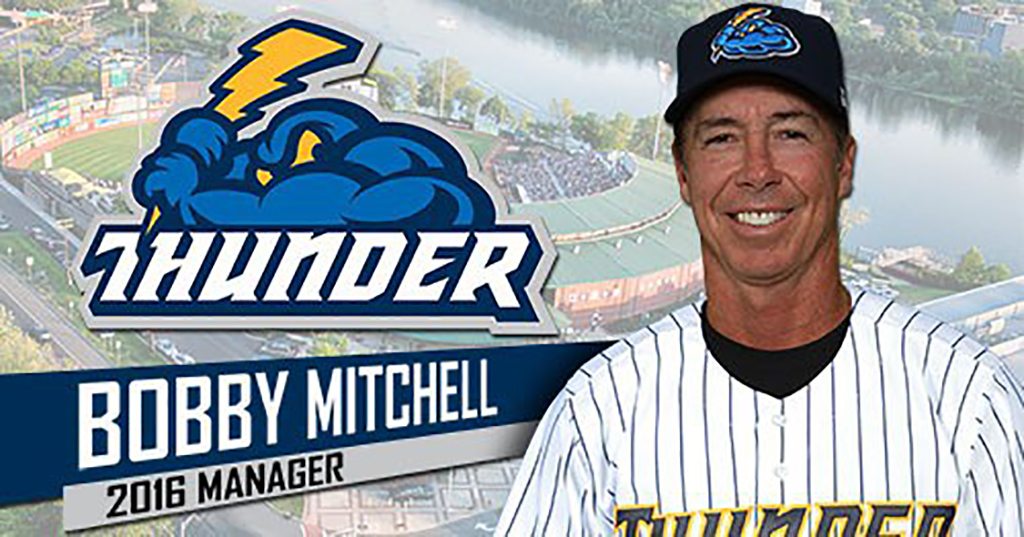 Earlier this week, the Trenton Thunder officially named former big-league outfielder Bobby Mitchell as the tenth manager in team history to replace the departed Al Pedrique, who was promoted to manage Triple-A Scranton after just one season in Trenton. Mitchell was kind enough to join Pinstriped Prospect for an exclusive telephone interview on Friday night.

Mitchell, who was most recently the Minor League Outfield/Baserunning Coordinator with the Atlanta Braves over the course of the previous two seasons, is excited to join the Yankees organization.

Mitchell recalled meeting Yankees Vice President of Player Development Gary Denbo last season after being introduced to him through his good friend James Rowson, who is the Yankees Minor League Hitting Coordinator.

“I was roving with Atlanta and we came in to play the Yankees A-ball affiliate and Gary [Denbo] joined James [Rowson] and I for dinner,” admitted Mitchell. “At the time I thought he was a very nice person and came away thinking that he was a very classy guy.”

Mitchell added, “At the end of this year before Instructional League started, the Braves didn’t re-new my contract, which was a little bit of a surprise. I started contacting people and one of them was James to see if there was anything available, and at the time there wasn’t. Later in the offseason, Gary was nice enough to invite me out to Tampa for an interview and after talking, it seemed like a really nice fit and they felt the same way. I was talking to a few other teams at the time but I was happy to accept right away and join the Yankees organization.”

Despite never being part of the organization, Mitchell is somewhat familiar with his new home at Arm & Hammer Park. From 1992-2002, Mitchell served as the roving outfield/baserunning coach for the Boston Red Sox, whose Double-A affiliate during much of that juncture was in Trenton with the Thunder.

“I remember the ballpark being very nice and the atmosphere in Trenton was great,” said Mitchell. “The support that the city gave the team was awesome, which I think it is really huge for the players. The support that players get from fans really helps them out in the minor leagues; I’ve been through that game before and it is always great to play in front of a crowd who is supportive.”

While Mitchell has seven years of managerial experience under his belt in the Chicago Cubs and Los Angels Angels of Anaheim organizations, his career has primarily been spent as a roving instructor. He has spent over 20-years between the Boston Red Sox, San Diego Padres, Montreal Expos and Angels organizations as a hands on teacher of the game.

Mitchell added, “These days in baseball there is a good chance to see guys shoot to the big-leagues right from Double-A and these guys have to be prepared not just physically but mentally to go up to the major leagues and go to New York and be able to perform at a high level.”

Mitchell believes that they key to winning is the speed element of the game. Taking the extra base, dropping down the bunt and keeping the opposition on their toes are all things that he believes are the keys to success for a team at any level.

The Thunder also announced on Tuesday that Hitting Coach PJ Pilittere and Pitching Coach Jose Rosado will return for a second season in their respective roles with the team. Since Mitchell is coming over from a different organization and has little familiarity with the players throughout the system, he says that he is going to lean on his coaches a great deal in order to attain success.

“I am going to rely on my staff a lot the whole year for different things,” explained Mitchell. “Knowing players and their personalities is going to take a little bit of time but I am pretty easy going so I hope that will put the players at ease some so that they are not uptight around me. I’m hoping that it doesn’t take all that long to get to know them and really let them know that I am there for them. I always have an open-door policy and I want them to be comfortable.”

Mitchell added, “This game is a grind and you are going to have ups and downs but you have to work through the adversity. This game is not easy at all and I completely understand their frustrations when they struggle. Really, they just need to be focused on what they want and not stray. I was never the most talented guy but there was never a time when I was in the minor leagues that I wasn’t completely focused on making it to the major leagues. I think this is going to be a fun year in Trenton”