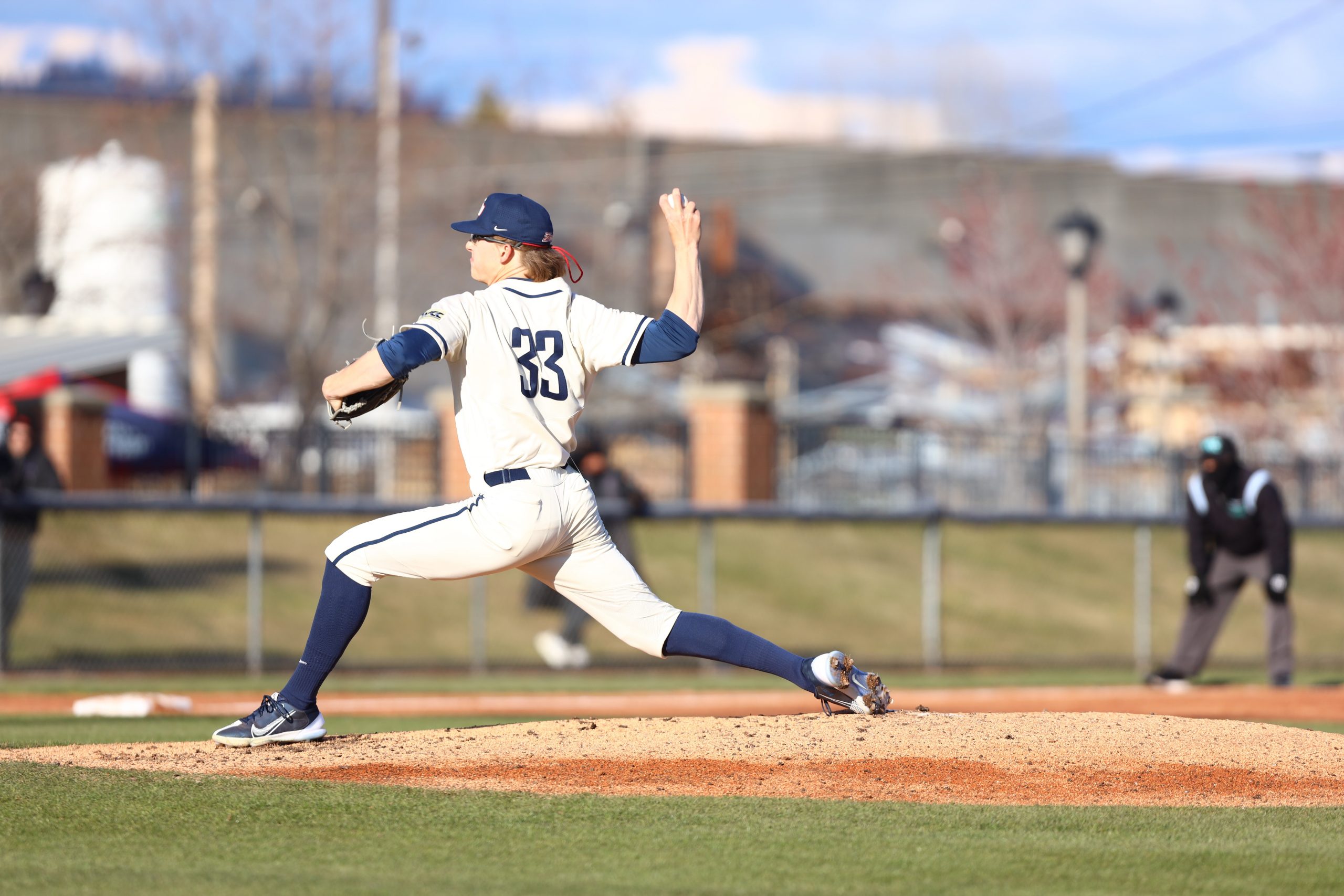 The first two rounds of the 2022 MLB First-Year Player went down on Sunday night in Los Angeles. Rounds three through 10 began on Monday at 2 p.m. EDT. After taking Vanderbilt outfielder Spencer Jones and Cal Poly right-handed pitcher Drew Thorpe with their first two picks, the Yankees made some more solid selections to begin day two. 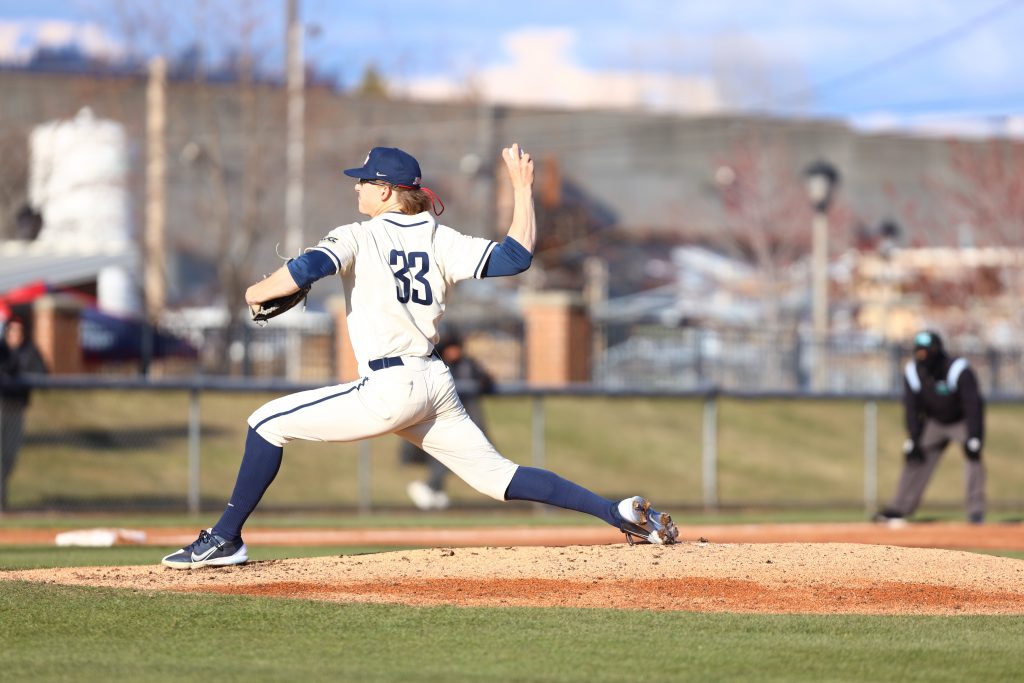 In round three, New York took another right-handed pitcher in Gonzaga starter Trystan Vrieling. The pick is a steal as the second-tier pitcher to Gabriel Hughes could have easily gone in the second round. Vrieling pitched mainly out of the bullpen in his first two years but showed this season that he has the stuff to start. He moved from Sunday to Saturday in the rotation to back up Hughes who was the Zags’ Friday night starter. The 6-foot-4 right-hander has a solid four-pitch mix led by a mid-90s fastball which he can command to all four quadrants in the zone.

In addition to the heater, Vrieling also throws a low-80s curveball with downward action and power, a mid-80s slider that sports some cutter action, and a changeup that can be legitimately plus. Vrieling has shown the ability to throw all four pitches for strikes with a repeatable delivery. There are times he has trouble with his control with a walk rate that is a touch high with 46 walks in 80 2/3 innings. But he has the stuff and feel for the zone to improve that and stick as a starter. 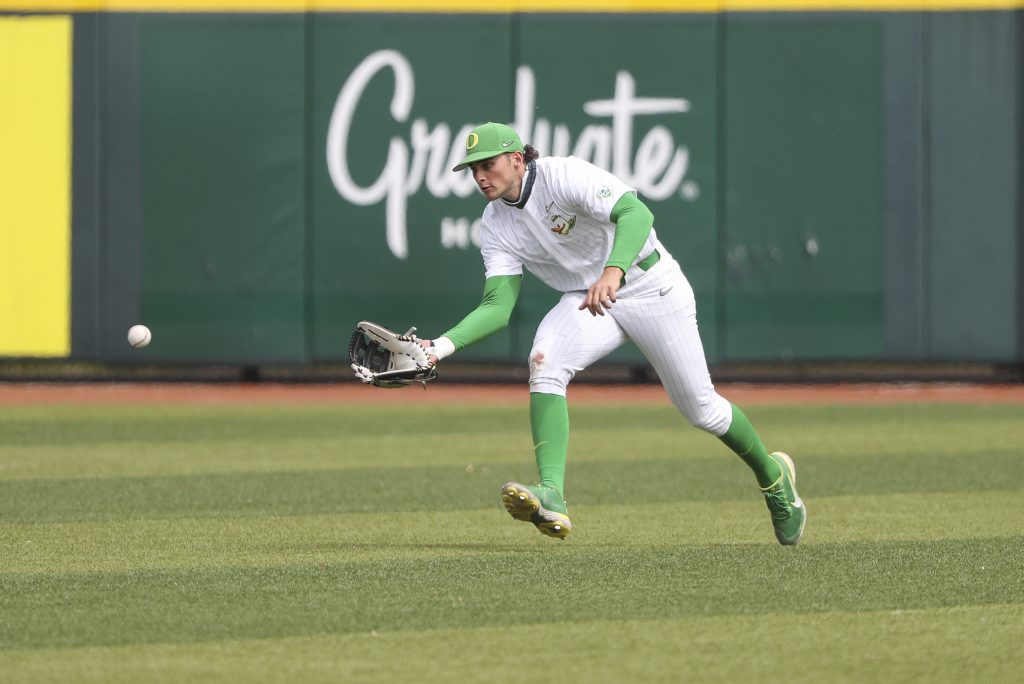 In round four, the Yankees went with another left-handed power hitter from the college ranks, with Anthony Hall out of Oregon. After taking Jones in the first round, the Yankees seem to be learning to take advantage of the short porch by getting power-hitting lefties. Hall had been taken by the Atlanta Braves in the 35th round of the 2019 MLB Draft, out of high school in San Diego before attending Oregon. He has legitimate plus raw power with plenty of juice to the pull side. He also has the ability to hit the other way.

In addition, Hall’s discipline improved at the plate, especially in the Cape Cod League. He will need to improve his pitch recognition, especially with breaking pitches, as he already smacks fastballs. Hall has speed as well, as he can record above-average sprint speeds, although he hasn’t been a base stealing threat. He looks more suited to play a corner outfield spot with just average instincts, although he does have the wheels to play center.

In the fifth round, the Yankees returned to the college pitching ranks to take LSU right-hander Eric Reyzelman. He has been through a lot of resiliency in his life as the son of two Jewish immigrants from the former Soviet Union. Both of his parents struggled financially as they came over to the United States. He has learned from them mightily how to deal with tough times. The right-hander was cut twice from his high school team in Concord, California, underwent Tommy John surgery, and had his college career disrupted by COVID.

“I think that had I not gone through what I went through in high school, I wouldn’t be anywhere near where I am,” Reyzelman said. “I think that I needed to be told no, and I guess one year wasn’t enough, I needed it multiple [times] for the switch to finally flip in my head to say that I need to make a change.”

The 6-foot-2 righty can reach triple digits on his fastball and also brings a cutter, changeup, curveball, and slider to his arsenal. Reyzelman hopes to pitch for Team Israel in the 2023 World Baseball Class. He provides another solid right-hander for the Yankees system. He likely has the makings of a reliever but could be more of a long reliever while making spot starts. 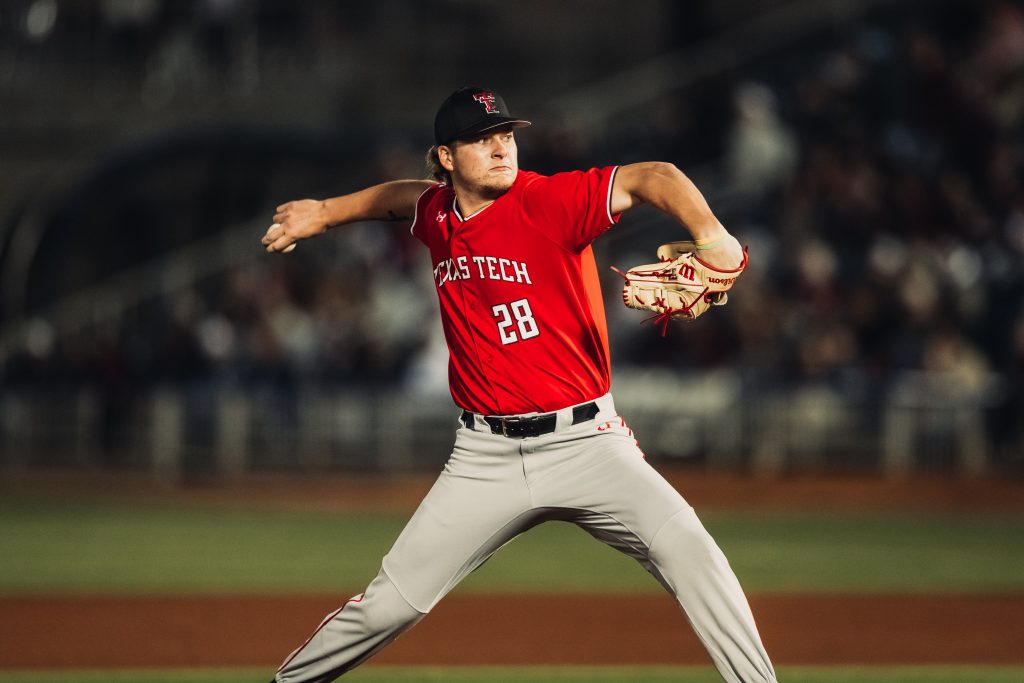 The Yankees went with another right-handed pitcher in the sixth round, grabbing Texas Tech starter Chase Hampton. The four-year sophomore has a four-pitch mix led by the fastball-slider combination while mixing in a curveball and a changeup. His fastball usually runs in the 92-94 mph range and topped out at 99 mph against Notre Dame in the Statesboro Regional. In that game, he struck out a career-high 12 Irish hitters. The fastball has solid run and fade on it making it difficult for hitters to square up. He will need to work on his control of the zone, but he did strike out 72 batters in 56 2/3 innings this season. 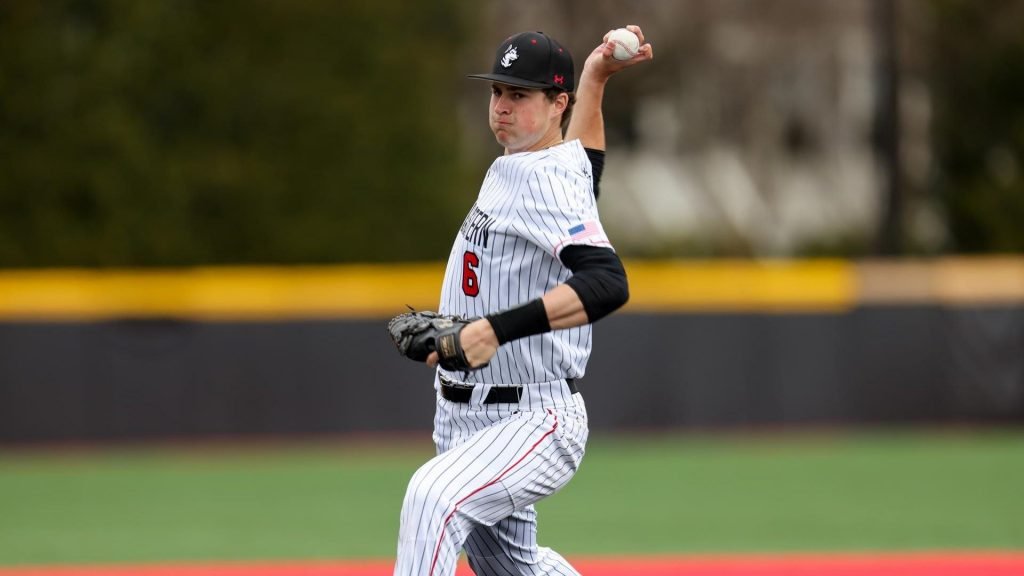 In the seventh round, the Yankees continued to add right-handed hurlers with Cam Schlitter from Northeastern University. Schlitter broke out in the 2021 season with a 1.88 ERA, 85 strikeouts, and a 1.017 WHIP over 76 2/3 innings. It was a struggle for him in the Cape Cod League last summer and he never returned to 2021 form this year. In 91 2/3 innings, he posted a 3.44 ERA with 85 strikeouts in 2022. Over his collegiate career, Schlitter did avoid the long ball as he allowed just 0.5 homers per nine. At 6-foot-6, 210 pounds, the right-hander can generate solid power but according to Baseball America, there’s nothing plus in the four-pitch mix” that also has a mid-80s slider, changeup, and curveball. The fastball sits in the low 90s and can touch 95 mph. He could develop into a back-end rotation arm with improvements to his secondary stuff. 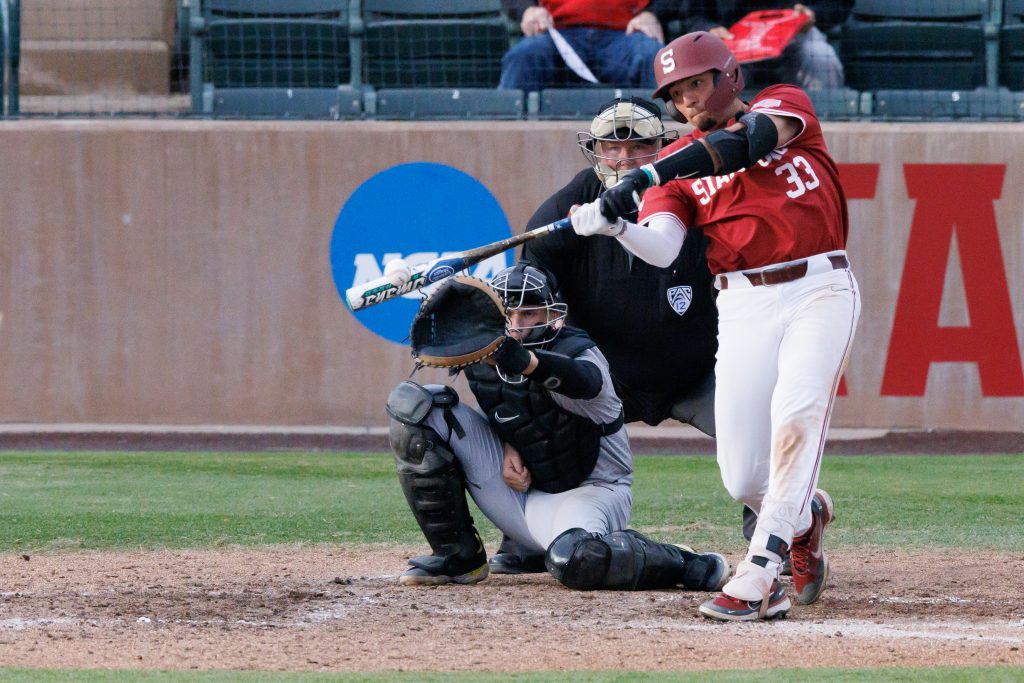 STANFORD, CA – MARCH 12: Brett Barrera during a game between University of Oregon and Stanford Baseball at Sunken Diamond on March 12, 2022 in Stanford, California. Photo provided by Stanford Athletics

Deleted: The Yankees took a break in their run on college pitchers in the eighth round, as they took Stanford “shortstop” Brett Barrera. New York has taken all college guys with their draft picks so far and that continued with their third bat. Barrera made a strong impression as a junior this season, slashing .351/.394/.575 with 19 doubles and 11 homers in 63 games for the Cardinal after making his way into the lineup. He has a punishing bat with a good amount of raw power and can hit the ball well the other way.

Although he was announced as a shortstop, Barrera didn’t play there at all in college and is graded as a below-average defender by Baseball America. If he were to make it to the big leagues for either the Yankees or another team, it will be the bat that carries him. The bat is very solid and can definitely help rise in the system. He isn’t the only high-ceiling offensive only player in this draft, as Jacob Berry is not strong defensively and was taken seventh overall by the Miami Marlins. Berry has a higher ceiling, but Barrera could reach that type of level at the plate with strong development. 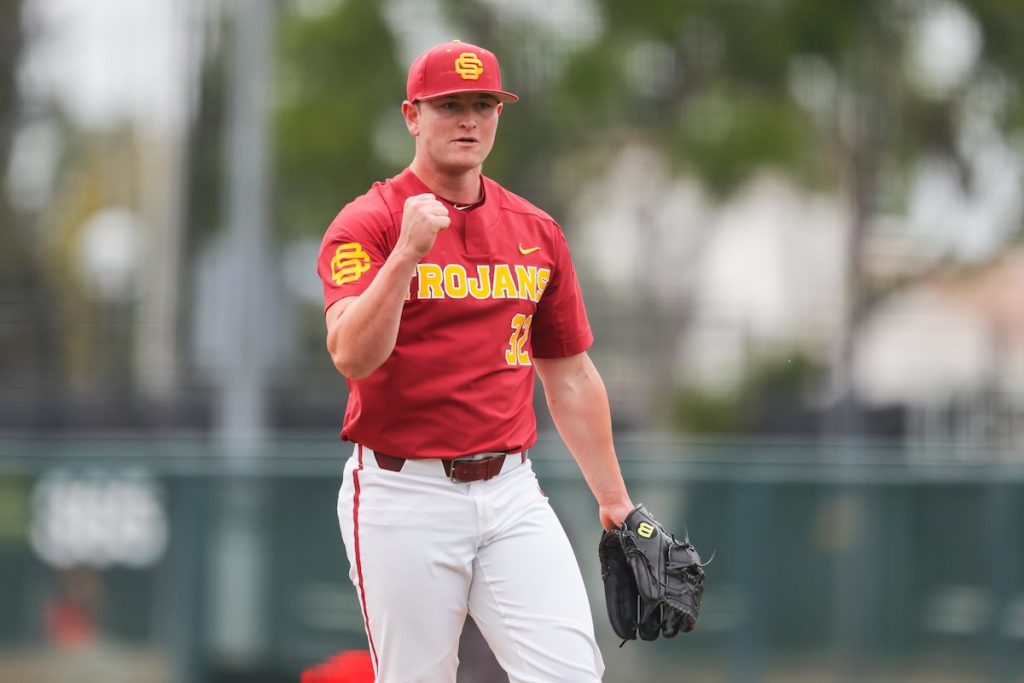 In the ninth round, the Yankees returned to the college pitcher pool by taking another right-hander in USC pitcher Matt Keating. While he has limited usage on his arm, he has the frame at 6-foot-1, 215 pounds to add more velocity, and could thrive as a reliever. He posted a 3.60 ERA in 30 innings with 44 strikeouts. His secondary pitches are solid with high spin rates. He has an elite breaking pitch with late break that can generate plenty of whiffs. You can never have too much pitching and the Yankees have certainly taken advantage of adding to their depth. Keating did transfer to North Carolina for the upcoming season so signability was a question with him. But it is likely that the Yankees are able to sign him and keep him from attending. They can use extra slot money from previous under slots. 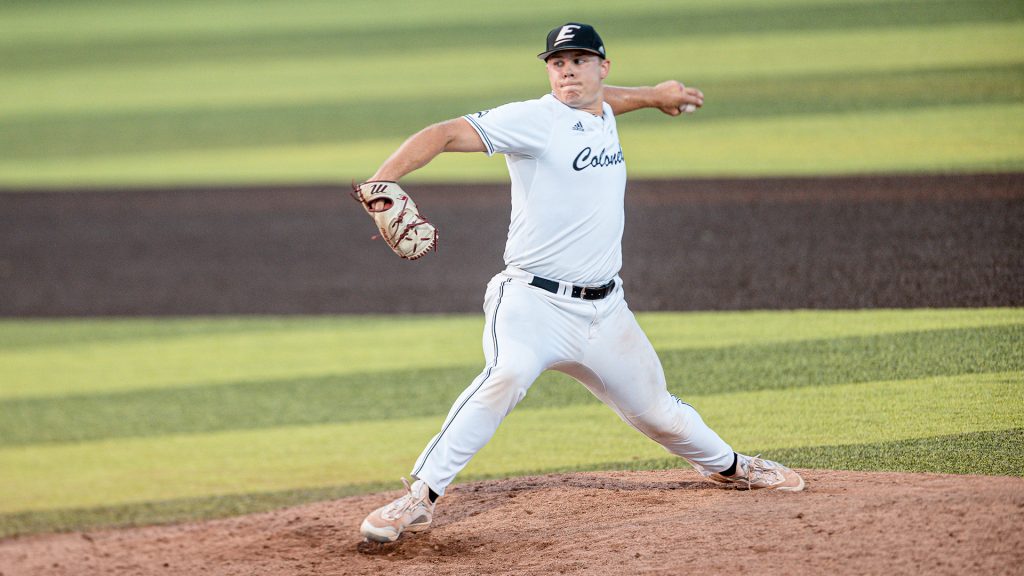 To close out day two of the MLB Draft, the Yankees got their lone left-handed pitcher so far. With the pick, they took southpaw Will Brian out of Eastern Kentucky who is a fifth-year senior. Brian was unlisted on both MLB Pipeline’s and Baseball America’s pre-draft rankings. But he did earn a spot as a finalist for Division I Reliever of the Year this season. The 23-year-old stands at just 5-foot-11 but showed that didn’t matter as he was tied third in the nation with 15 saves. As EKU’s closer over the last two seasons, he posted a 1.83 ERA and 53/14 K/BB rate over 39 1/3 innings. As old as he is, this is a clear under slot pick for the Yankees. He also put up his career year after overcoming a seizure last year.

Stay tuned to Pinstriped Prospects for more on the Yankees draft as tomorrow will conclude with rounds 11-20.