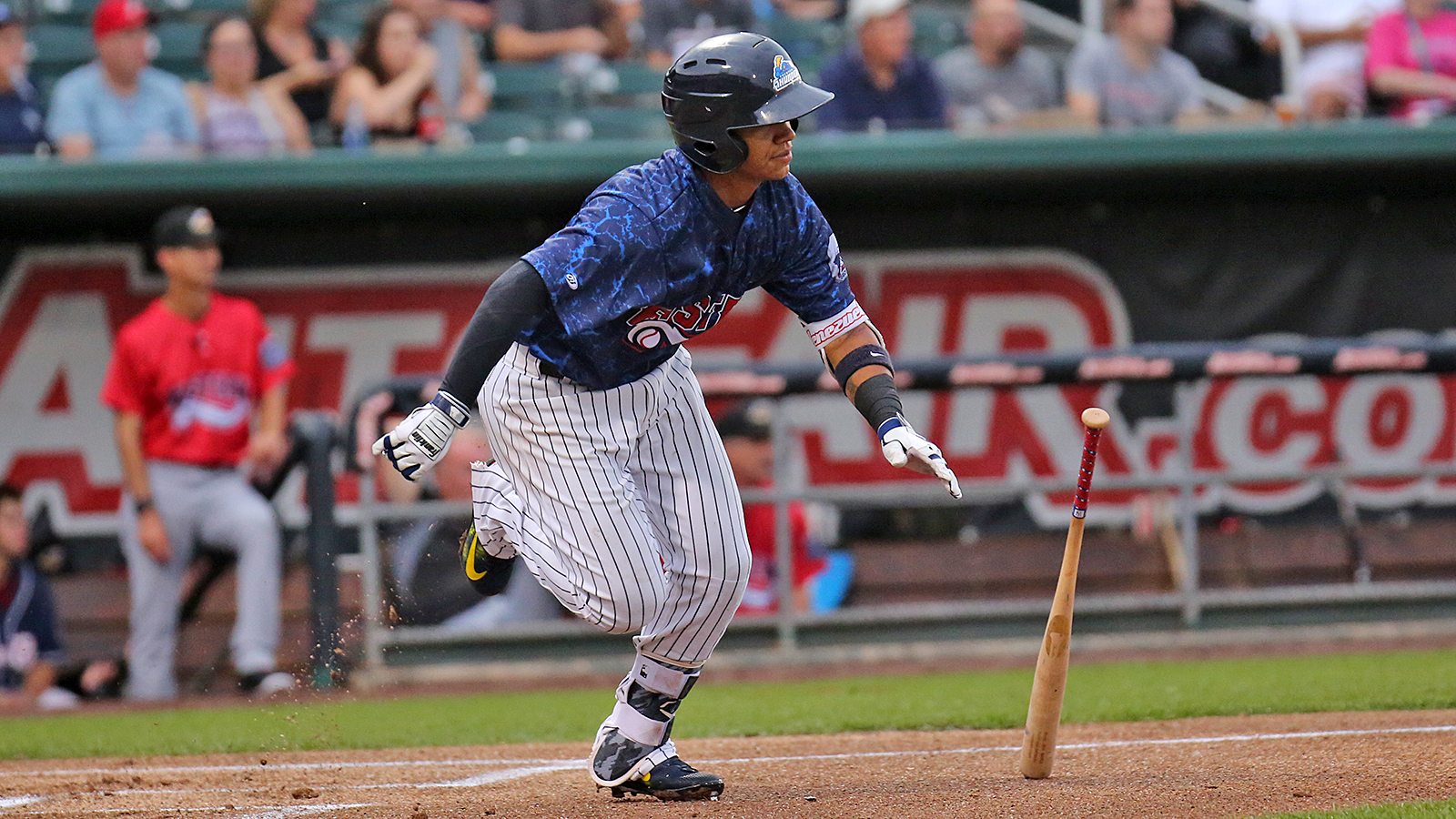 Trenton Thunder’s Thairo Estrada gets a hit in the first inning of the Eastern League All Star Classic in Manchester, NH on Wednesday, July 12, 2017. (Martin Griff)

The New York Yankees got to introduce the newest slugger to their offense in Giancarlo Stanton. While the major league club is getting their deserved accolades, some of their top minor leaguers got accolades of their own this week.

Last month, the Arizona Fall League Top Prospects Team was announced. These awards are decided by the coaching staffs and the managers in the AFL.

Out of the 23 players named to the roster, four of them came from the Yankees organization. Those four players were first baseman Billy McKinney, shortstop Thairo Estrada, outfielder Estevan Florial, and starting pitcher Justus Sheffield. Three of those players, excluding Sheffield, are on the current 40-man roster.

McKinney was learning how to play first base for the first time since New York has a lot of outfield depth in their system. In 19 games, he only made one error at first base and hit .279 with one home run and 20 RBI’s (most on the Scottsdale Scorpions).

Staying in the infield, Estrada had 27 hits in 20 games, which was tied the most on the Scorpions. In addition, the shortstop had a .811 OPS, drove in ten runs, and was tied for second on the team in total bases (34).

Estrada might even have a chance to compete for a major league spot in spring training. After the Stanton press conference, Brian Cashman told the media that the 21-year-old is in the mix for the open second base spot with Starlin Castro now in Miami:

Cashman said that the Yankees do not have a second baseman they can name today. He mentioned Gleyber Torres, Ronald Torreyes, Tyler Wade & Thairo Estrada as candidates.

In the outfield, Florial did have 29 strikeouts, but he did show off some great speed as he was one of three players who had multiple triples and he was one of five players on the Scorpions with 20 or more hits and one of four players with ten walks. He joined a great list with the likes of other top outfield prospects including Ronald Acuna (Braves) and Victor Robles (Nationals) to name a few.

Finally, Sheffield got the chance to pitch in the AFL Fall Stars game in early November. In five starts, he went 2-2 with a 3.10 ERA. What stood out about his numbers was that he did not give up many free passes as he had 22 strikeouts to only three walks in 20.1 innings.

One Yankee that did not make this team that had a great case for it is reliever Cody Carroll, who did not give up a run, surrendered only two hits, had four saves, and struck out 18 hitters in his nine appearances.

Throughout the AFL, these Yankees prospects were able to impress a lot of people and they can use that big stage as a helpful experience for their development as they progress through the farm system.