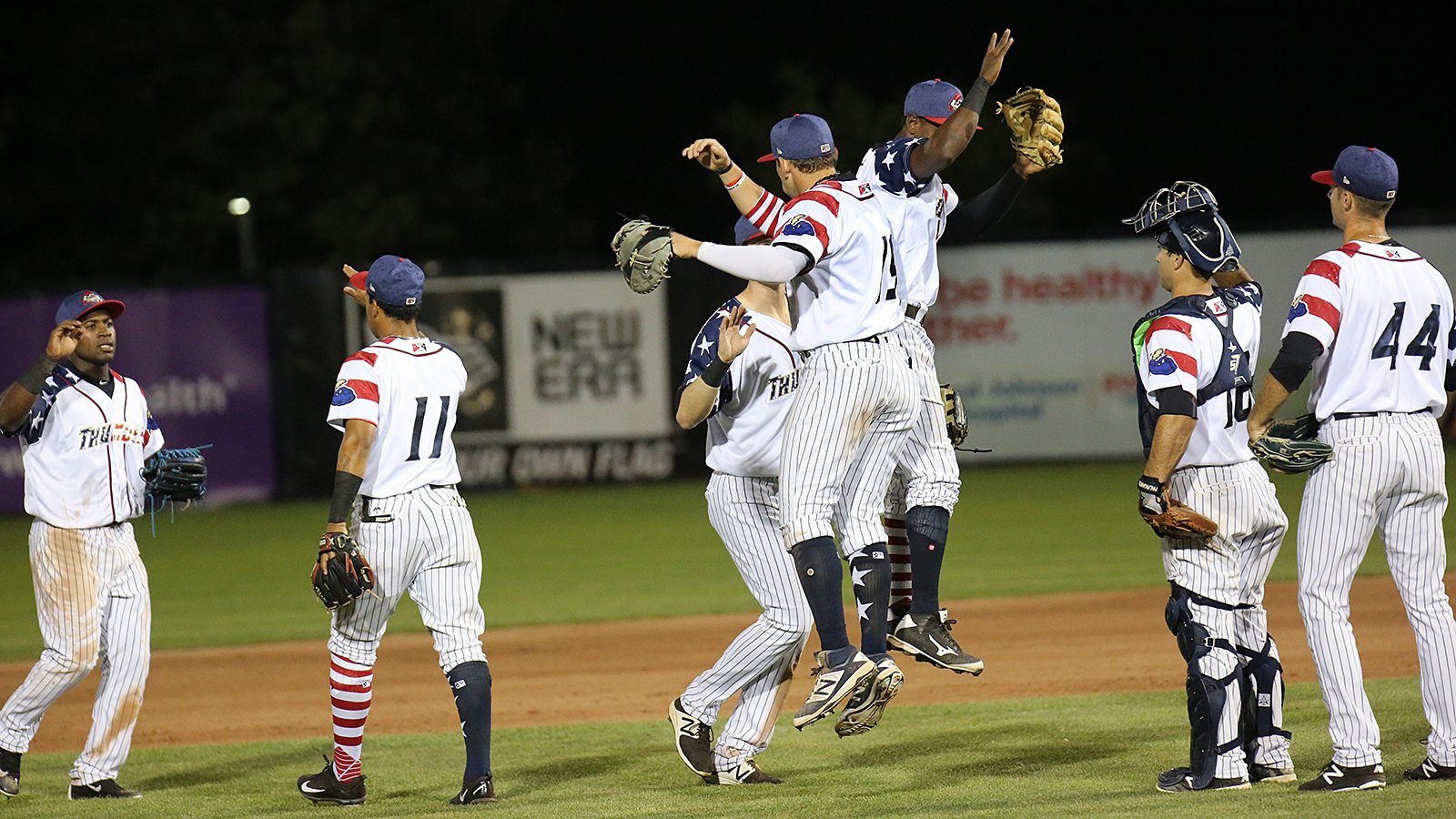 And the Thunder put that on display in their 8-2 win over the Reading Fightin Phils on Wednesday night in front of 5,026 at ARM & HAMMER Park.

Trenton (56-28) finished with 12 total hits in the game, and the first four batters in the Thunder lineup accounted for seven of those hits, and drove in seven of the eight runs.

“Those guys at the top (of the order) really cause some havoc and so far it’s been fun to watch,” said Thunder Manager Bobby Mitchell after the game. “We were also 6-for-16 with runners in scoring position tonight, so that was good.”

It looked like business as usual at first in this game. Trenton jumped out to an early lead when speedster Tito Polo (2-for-4, three RBIs, two runs scored) was hit by a pitch and then made his way around the bases on an RBI-single from Billy Fleming (2-for-4, two RBIs, run scored).

But Trenton starter Justus Sheffield appeared to struggle with his command, and after an unearned run came across for Reading (50-32) in the third inning, Sheffield served up a solo home run on the first pitch he threw in the fourth. 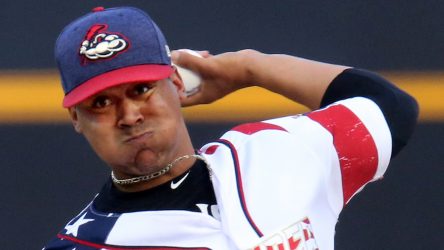 Things quickly went from bad to worse for the Thunder starter in the fifth. After he induced a ground ball out to start the fifth inning, he appeared to grimace as he attempted to stretch out his right oblique. Mitchell quickly came out of the dugout to grab Sheffield and he was replaced by Nestor Cortes out of the bullpen.

“Not sure what Sheff’s issue is, hopefully it’s just a cramp,” Mitchell said. “But it’s in the oblique area so we want to make sure we don’t strain it more. He’s going to see the doctor tomorrow, so we’ll have more information about it. But he says it’s a cramp. But a lot of times pulls feel like cramps so we just want to make sure.

“(Before he exited) I thought he threw well. I mean, he gave up the homer, but that’s going to happen. He’s trying to mix his speeds well and he’s doing a pretty good job of that. He did walk three guys in 4 1/3, and you hope he can cut down on that but he pitched well.” 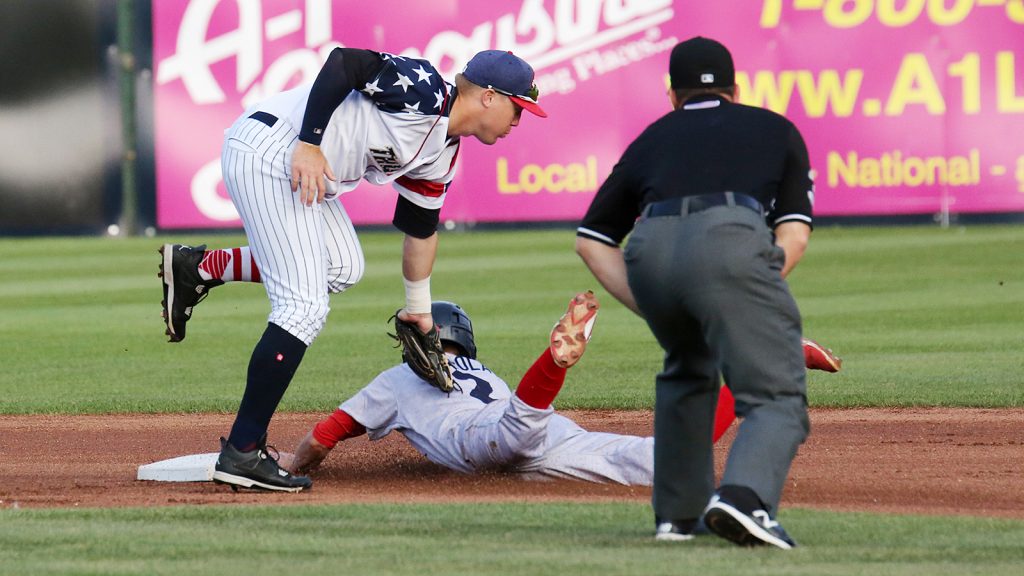 Cortes (5-0) readied himself quickly and then settled the game down as he went 2 2/3 innings without giving up a hit or a run, while walking one and striking out three.

“Nestor did a great job,” Mitchell said. “You know, it’s a luxury to have that guy in that position in the bullpen. To come in and he’s like a starter. He knows how to pitch.”

“I just want to do my part to be in a good position to make my team win and help out and I think that’s what I did,” said Cortes who entered the game with his team trailing 2-1. “My mindset coming into the game is attack and throw strikes and get out of there as fast as I can.”

Cortes did his part, and then in the fifth, the Thunder offense did theirs. Trenton sent 10 men to the plate, and scored six of them on seven hits. After loading the bases without recording an out, Jorge Mateo (2-for-5, two RBIs, run scored) stepped to the plate and sent the first pitch he saw into the gap in left-centerfield. That plated two runs and put the Thunder ahead again, 3-2. 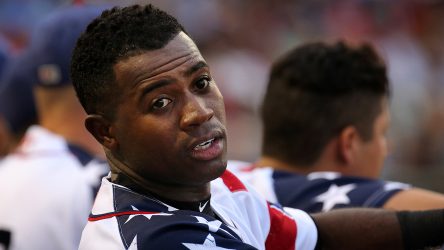 Polo was the next batter, and he also swung at the first pitch he saw, and sent it right back up the middle to drive in two more runs. Fleming and Zack Zehner followed that up with RBI-knocks themselves and the Thunder never looked back.

“We had that big inning and I thought, actually, that the biggest at-bat was the leadoff single by (Jorge) Saez to get us going,” Mitchell said of his catcher. “He’s had some really good at-bats, and he was able to get a breaking ball there with two strikes and get a base hit.”

Dillon McNamara pitched the final two innings to seal the victory for Trenton. McNamara only gave up one hit and walked two while striking out three over his two frames of work. 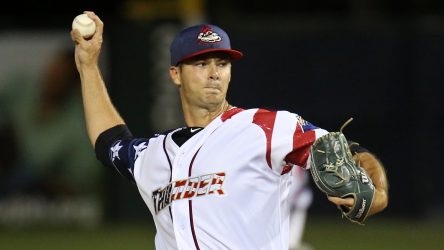 “McNamara did a heck of job and that’s good to see because he hasn’t pitched in about six days,” Mitchell said. “He did a fantastic job, when Mac’s throwing strikes, he’s tough because he throws a 94-mph cutter. And his cutter is good and he showed it tonight against those guys.”

With the victory, the Thunder tied their season-best winning streak of seven straight games. Trenton will try to set the new mark on Thursday when they look to complete the sweep of the Fightin Phils. Yefrey Ramirez (8-3) takes the ball for the Thunder and he will be countered by Ranfi Casimiro (1-0). First pitch is set for 7 p.m. 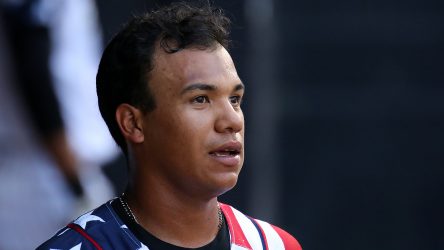