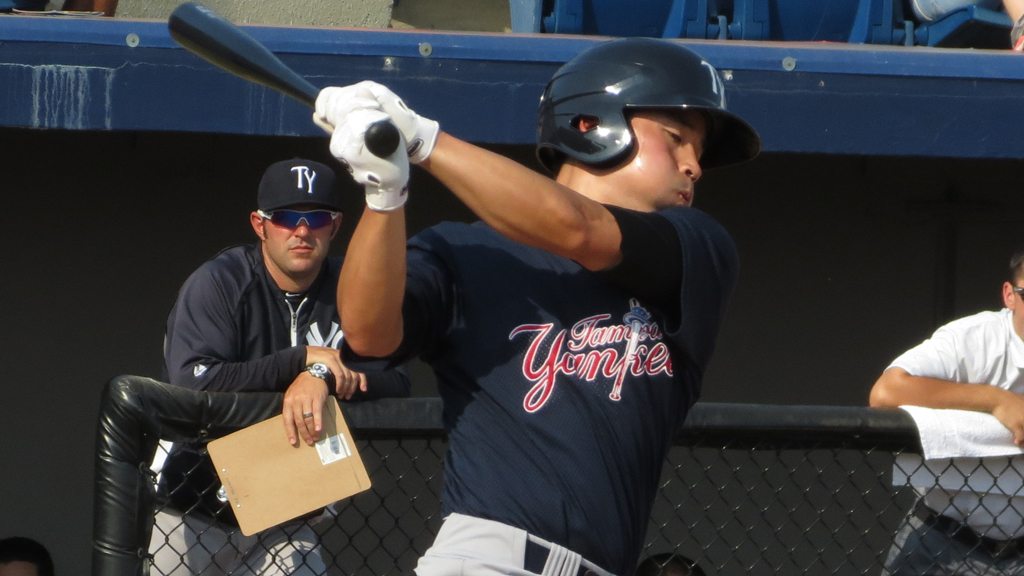 Danny Oh contributed to yet another Trenton win Sunday evening.
ERIE, PA – After holding a lead for the better part of the game, Erie struck for four runs in the bottom of the 6th and 7th innings to beat the Thunder 6-5 Saturday night.

Starting pitcher Miguel Sulbaran needed just 55 pitches through five innings and held a 3-2 lead entering the bottom of the 6th inning. However, following a leadoff double by Wynton Bernard, Erie’s Connor Harrell smacked a three-run homer off Erie Insurance Arena in left field to vault the ‘Wolves ahead 4-3. Sulbaran bore down and got through the inning and came out for the 7th inning before allowing the first two to reach base and was promptly removed from the game. Both of those inherited runners came home to score off Johnny Barbato to stretch the Erie lead to 6-3.

The Thunder drew back to within a run in the 8th inning with a two-run home run by Gary Sanchez, who homered for the fourth time in his last nine games to make it 6-5 with one out in the 8th. The Erie bullpen retired the final five batters they faced as the Thunder were unable to put the tying run on base. In the 9th inning, closer Jeff Ferrell entered for his fourth save of the season and struck out Danny Oh, Cito Culver and Taylor Dugas in order to end the ballgame.

Oh got the scoring started for the Thunder in the 2nd inning after Trenton had fallen behind 1-0. After the first two batters were retired, Jose Rosario reached on an error by Erie’s shortstop, Curt Powell. With the inning extended, the Thunder right fielder launched a two-run homer to right field for his first Double-A hit. It was just his second professional home run, and his first since September 9, 2012 for Short Season-A Staten Island. Ali Castillo continued his hot hitting and with a 2-for-4 raises his batting average to .371 (13-for-35) over his last eight games—including five multi-hit nights.

It was just the second time in 42 games this season that the Thunder have allowed multiple home runs in a game, and it was the first time that they came off one pitcher. By contrast, the Thunder had homered multiple times in five games entering Saturday night and had been 4-1 in those instances. With the loss the Thunder drop to 21-21 on the season and are 4-2 at Jerry Uht Park this season.

The Thunder and SeaWolves continue their four-game series Sunday with a scheduled 1:35 p.m. first pitch. Pre-game coverage begins at 1:20 p.m. on 91.3 FM or online at www.trentonthunder.com.