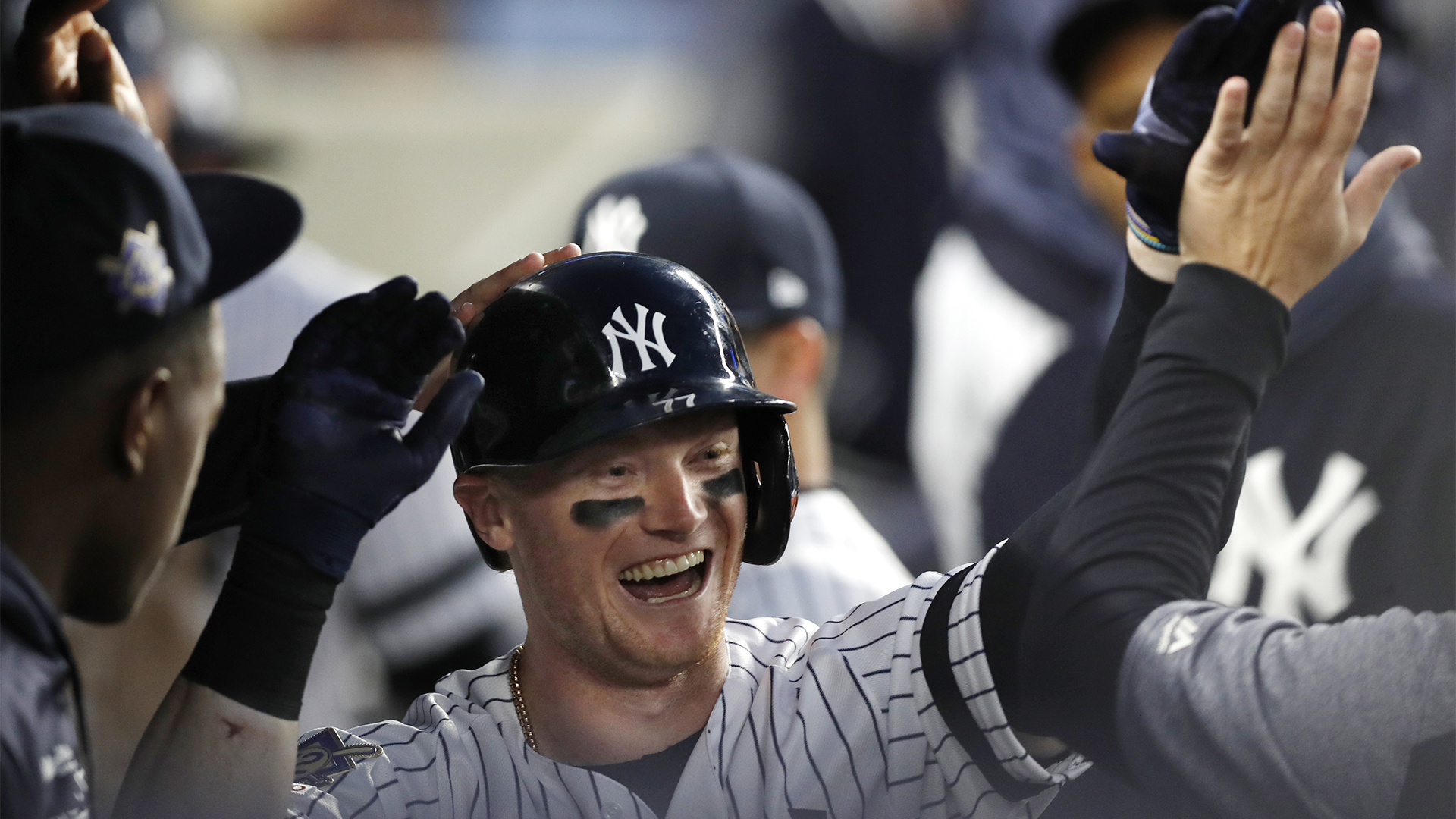 When the Yankees acquired former fifth-overall pick Clint Frazier from Cleveland in exchange for Andrew Miller at the 2016 trade deadline, there were plenty of reasons to be excited. Scouting him with the Indians’ Double-A affiliate in Akron earlier that season, Baseball Prospectus gushed about the red-headed outfielder. “Unreal plus-plus bat speed through an explosive stroke,” their evaluator wrote. “Natural strength, compact build, and huge bat speed combine for raw power … Hits the ball as hard as anyone in the minors. 20+ home runs to come.” BP assigned future grades of 45-50 for Frazier’s hit tool, a whopping 60 for power, and a 55 overall. Along with Gleyber Torres and Justus Sheffield, he headlined the spectacular haul from that fortune-shifting July. 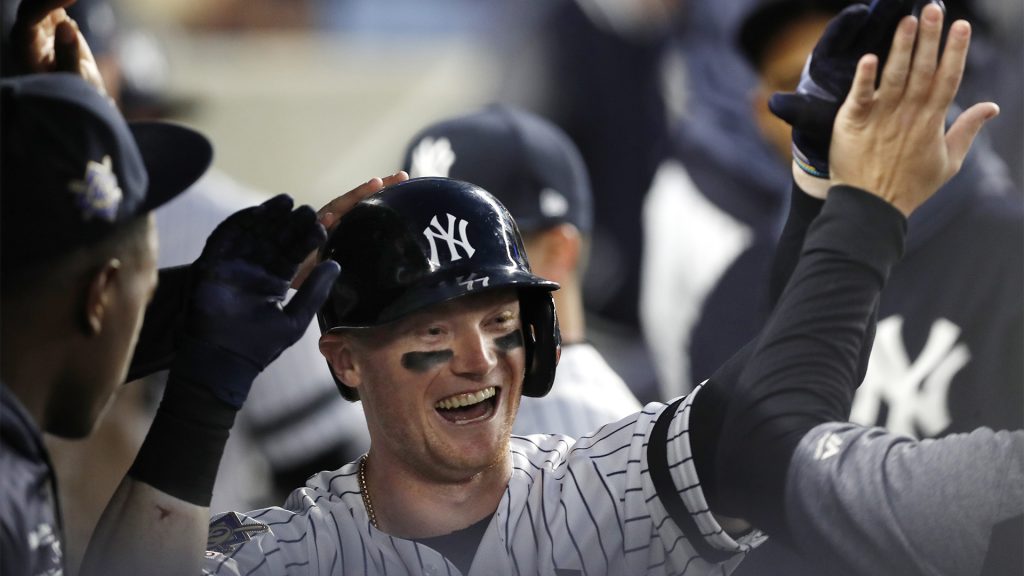 Nearly three years and 250 major league plate appearances into his Yankees tenure, Frazier has demonstrated flashes of the unmitigated potential that made him such a well-regarded prospect. He broke into The Show with a double and home run in his first game back in 2017, adding a walk-off blast a few days later. Last year, lingering concussion issues kept him from capitalizing on an opportunity for major league reps when Aaron Judge broke his wrist. With Aaron Hicks and Giancarlo Stanton on the injured list to begin this season, Frazier has locked down an everyday role and blossomed into one of the team’s most consistent offensive threats. He’s posted an impressive slash line of .339/.358/.661, good for a wRC+ of 164 across 67 plate appearances in 2019. A closer look at his batted-ball profile will reveal whether that production is sustainable.

First, the good news: some Statcast metrics suggest Frazier’s success is no mirage. Baseball Savant’s expected statistics, which adjust actual stats to account for a given player’s exit velocity and launch angle on batted balls, hold him in very high regard: 94th percentile for expected batting average (.324), 85th percentile for expected slugging (.556), and 80th percentile for expected wOBA (.382). Frazier’s average exit velocity is close to 90 miles per hour, and his average launch angle is about 14 degrees. Across all of baseball last season, hitters posted a .969 batting average on batted balls with those figures – 62 hits out of 64 batted-ball events. Frazier is generally avoiding soft contact and almost never pops out, with fully half of his fly balls classified as hard hit. His spray chart is a thing of beauty, showcasing his ability to drive the ball with authority to all fields. Of his six homers this season, three were pulled, one was essentially dead center, and two were to the opposite field (chart is through Friday). 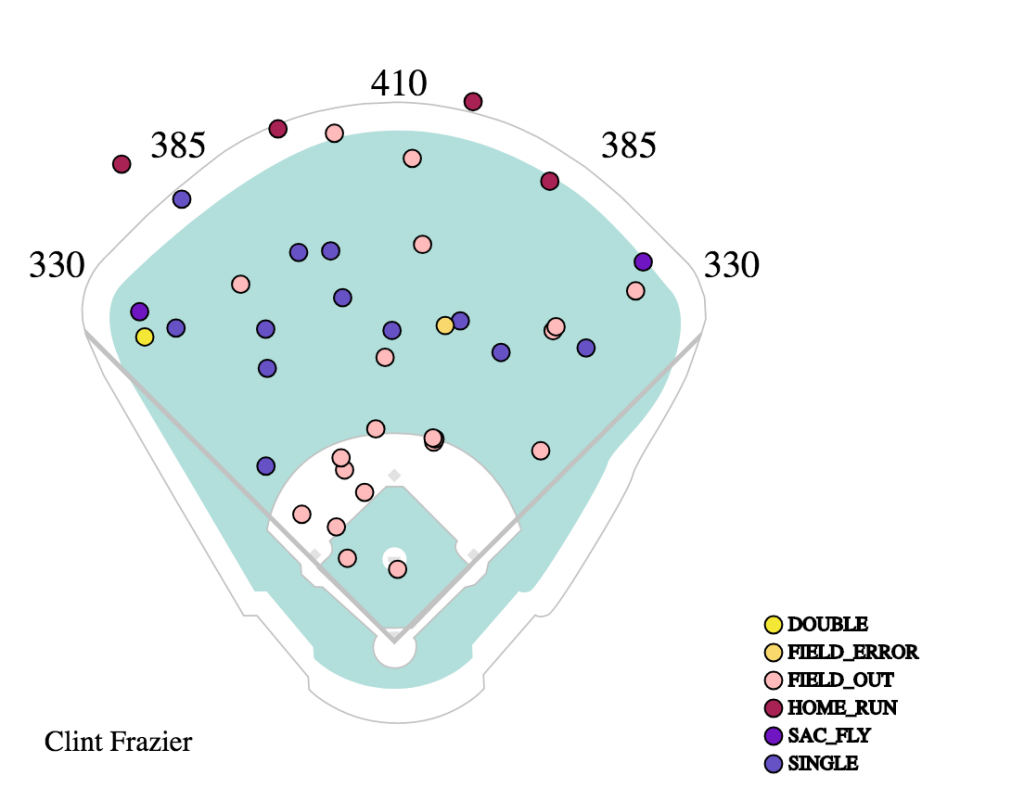 There are other trends that are less favorable, however. Frazier’s exit velocity this year grades out close to average, and his hard-hit percentage fairly far below. Half his contact is classified as medium, with the vast majority of that coming on ground balls and line drives; these are the types of hits that rely on field placement and might artificially inflate a player’s BABIP, so look for some regression here. This also explains the relative lack of extra-base hits thus far: apart from his six homers, he has 13 singles and 2 doubles. He’ll need to improve the consistent quality of his contact to maintain his sky-high average.

It might seem surprising that a player known for his power throughout his prospect days would be having issues with hard contact. For an explanation here, it’s helpful to refer to another line in the 2016 scouting report. Back then, BP noted that Frazier “showed some difficulty ID’ing breaking balls.” That challenge has stuck with him in his major league career. He’s posted a chase rate of 38 percent on sliders and 34 percent on curveballs as well as a swinging strike rate of nearly 23 percent and almost 16 percent on those pitches, respectively. Frazier shows a definite tendency to swing at breaking stuff both inside and outside the strike zone. 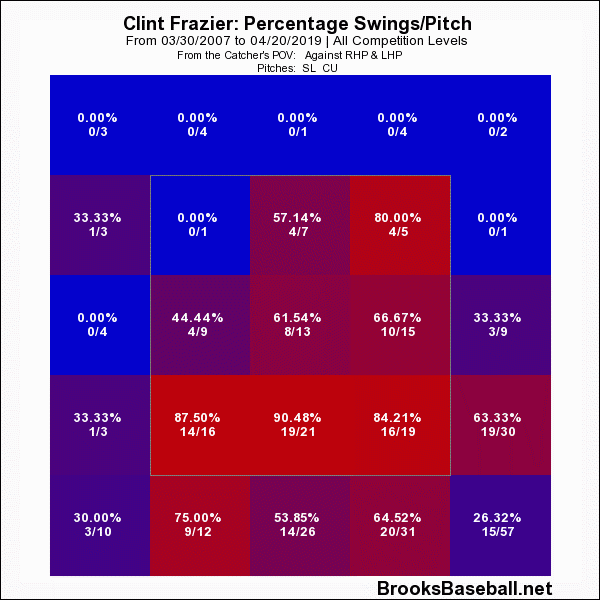 Even when Frazier does make contact with breaking pitches, he’s hitting them into the ground (43 percent ground ball rate on sliders and 46 percent on curves). His grounders also tend not to be hit very hard – nearly 3 in 4 across his career are classified as soft or medium contact. Frazier’s trouble picking up spin, therefore, is causing him to whiff and depressing his exit velocity figures. Resolving this will be key to sustaining his early-season success.

The hype around Frazier continues to build as he looks to make 2019 a true breakout campaign, and he came a triple shy of the cycle in Saturday’s game against the Royals. Boasting overall solid numbers, Frazier can live up to his lofty expectations with a few tweaks to his approach and a little more of the awe-inspiring power that defined his days in the minors. When it comes to outfield depth, the Yankees’ cup runneth over – but Frazier’s performance, and clear ability to produce at the major league level, are becoming impossible to ignore.