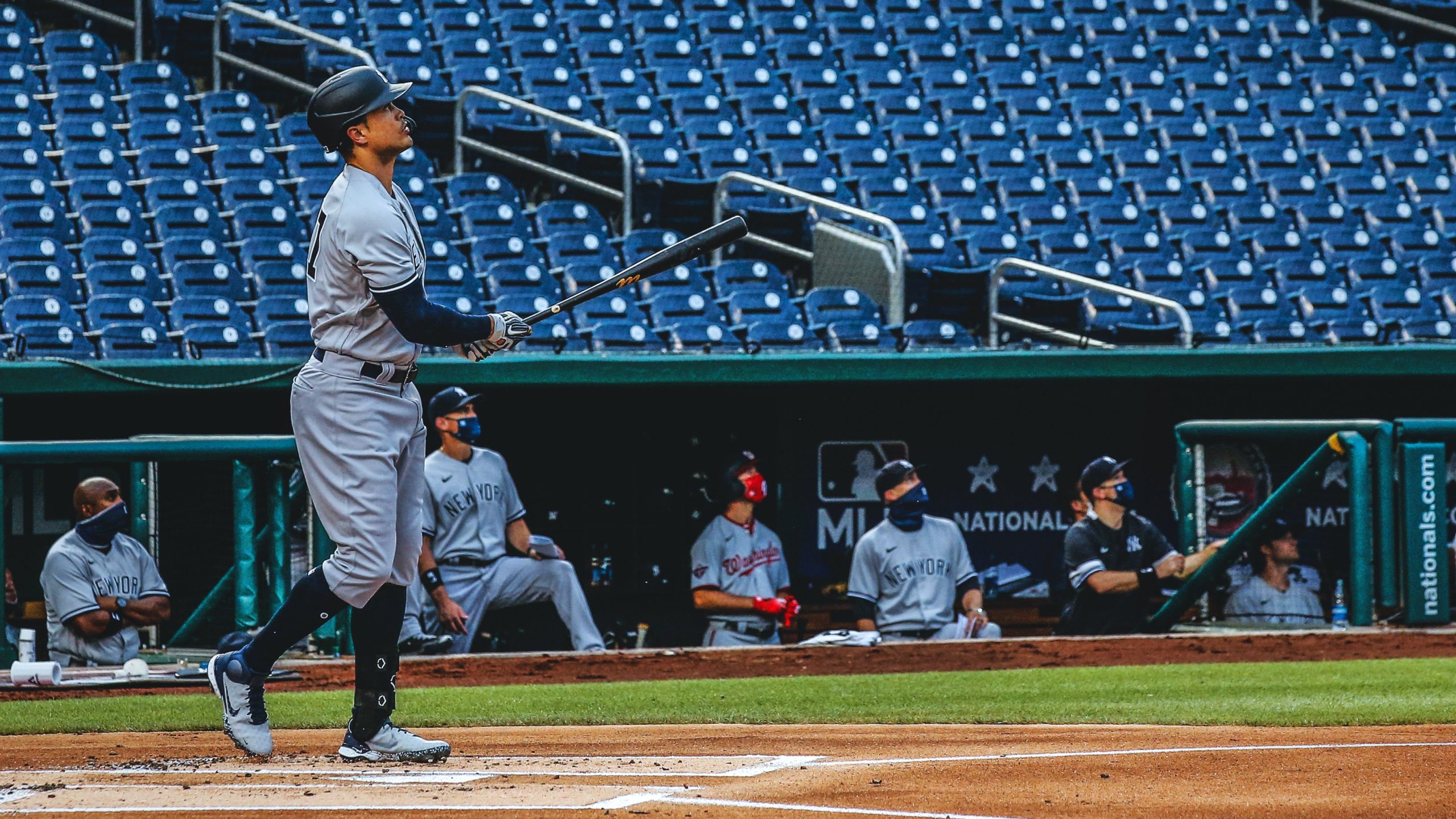 THE ONE-TIME EDITORIAL USE OF THIS IMAGE IS SUBJECT TO A NONEXCLUSIVE, NONTRANSFERABLE, NONSUBLICENSEABLE REVOCABLE LICENSE (“LICENSE”) GRANTED AT NO COST BY THE NEW YORK YANKEES PARTNERSHIP (“LICENSOR”). THIS LICENSE DOES NOT PERMIT ANY COMMERCIAL USE OF THE IMAGE, AND FURTHER REPRODUCTION, ARCHIVING, DISSEMINATION OR DIGITAL EDITING OTHER THAN SCALING FOR SIZE IS PROHIBITED WITHOUT LICENSOR’S ADVANCE WRITTEN PERMISSION, WHICH MAY BE WITHHELD, CONDITIONED OR DELAYED IN LICENSOR’S SOLE AND ABSOLUTE DISCRETION. ANY PERMITTED USE OF THIS IMAGE VIA INTERACTIVE MEDIA, INCLUDING ALL SOCIAL MEDIA OUTLETS, MAY REQUIRE THE CONSENT OF MLB ADVANCED MEDIA, L.P. LICENSOR SHALL RETAIN ALL COPYRIGHTS TO THE IMAGE AND DERIVATIVE WORKS THEREOF PURSUANT TO U.S.C. TITLE 17 OF THE UNITED STATES CODE AND MAY REVOKE THIS LICENSE AT ANY TIME AND FOR ANY REASON IN LICENSOR’S SOLE AND ABSOLUTE DISCRETION. NOTHING CONTAINED HEREIN GRANTS ANY RIGHT, TITLE AND INTEREST TO ANY THIRD PARTY INTELLECTUAL PROPERTY AND/OR THE LIKENESS OF ANY INDIVIDUALS APPEARING IN THE IMAGE. THIS IMAGE IS PROTECTED BY DIGITAL WATERMARK. PLEASE CREDIT: NEW YORK YANKEES. ALL RIGHTS RESERVED. / © New York Yankees

Before Covid-19 altered the sports world, I wrote an article on five bold predictions for the 2020 New York Yankees. One of them was that Giancarlo Stanton would have a better season than Gleyber Torres. To some, this may have seemed crazy, Torres is coming off of a season where he slashed .278/.337/.535 with 38 home runs and 90 RBI. On top of that, he recorded a .358 wOBA and a 125 wRC+. Stanton, meanwhile, barely played at all in 2019.

Now, though, I not only believe that Giancarlo Stanton will have a better season at the plate than Gleyber Torres, but I think he will be the Yankees’ best hitter. In that January article, I compared FanGraphs’ Steamer Projections for both players. In a full 162 game season, Steamer said Torres would have a .272/.339/.509 slash line with 34 home runs and 98 RBI. It also thought that he’d experience a five-point dip in wRC+ as well as a six-point dip in wOBA and finish with 3.5 WAR.

Stanton’s Steamer, in comparison, was eye-popping. It projected him to finish with a .267/.355/.589 slash line with 49 home runs and 115 RBI. Furthermore, the model said he would record a 142 wRC+ and a .385 wOBA to go along with a 4.3 WAR. A better season than Gleyber Torres. Fast forward to today, and it’s worth taking another glance at those projections given the shortened 60 game season.

Steamer seems to think that Giancarlo will not only have a better season than Gleyber Torres but will have a better season than anyone on the team. For instance, Stanton’s .385 wOBA is tops on the roster in terms of projected outcome. In second is Aaron Judge, who is projected for a .372 wOBA. The same can be said for wRC+, where Stanton leads the team with a projected outcome of 143. Again, Judge is second with .134.

In the opener against the Nationals on Thursday, we got a glimpse of what Giancarlo is really capable of. He went 2-3 with a blast of a two-run home run and a hard RBI single to right field. A couple of things that seemed to stand out, though, had nothing to do with his play. For one, I thought Giancarlo looked like he had shed a little bit of weight. He was clearly hobbled in the postseason, struggling for mobility as he donned a clunky knee brace. Add on to that him being a rather large human being, and carrying all that weight can take his toll. But much like Judge, he seems to have slimmed down from his linebacker build, which may help him stay on the field.

Another thing that I think will allow Giancarlo to settle into his role with the Yankees is something Alex Rodriguez spoke about a lot on the broadcast. There aren’t any fans. No matter how good you are, it’s difficult to come to the New York Yankees with a contract in the hundreds of millions and expectations to match. Add on to that playing in front 45,000 New Yorkers at Yankee Stadium 81 times a year, and the pressure can build. Let’s not forget, he got booed in his first few games at Yankee Stadium and booed rather aggressively. Coming from the Miami Marlins, that’s hard to adjust to.

Now, Giancarlo did have a nice run in 2018 when Judge was sidelined, despite what some fans may say. He quite literally carried the team for two months. But he has yet to fully live up to the hype that he came with. 2020, though, offers Giancarlo an opportunity to settle down and find his groove. There are no distractions in the crowd. There’s no pressure of playing in front of people, and thus less pressure to put on a show. A-Rod said it best, sometimes you try to do too much when people are watching and the crowd is buzzing.

A more slender and relaxed Giancarlo Stanton, to me, is a very scary Giancarlo Stanton. We got a glimpse of that on Thursday in what he did against Max Scherzer. I, for one, think we’ll be seeing the Giancarlo Stanton that the Yankees paid for this season. And to me, that will set him up for success down the road as he builds confidence in pinstripes.