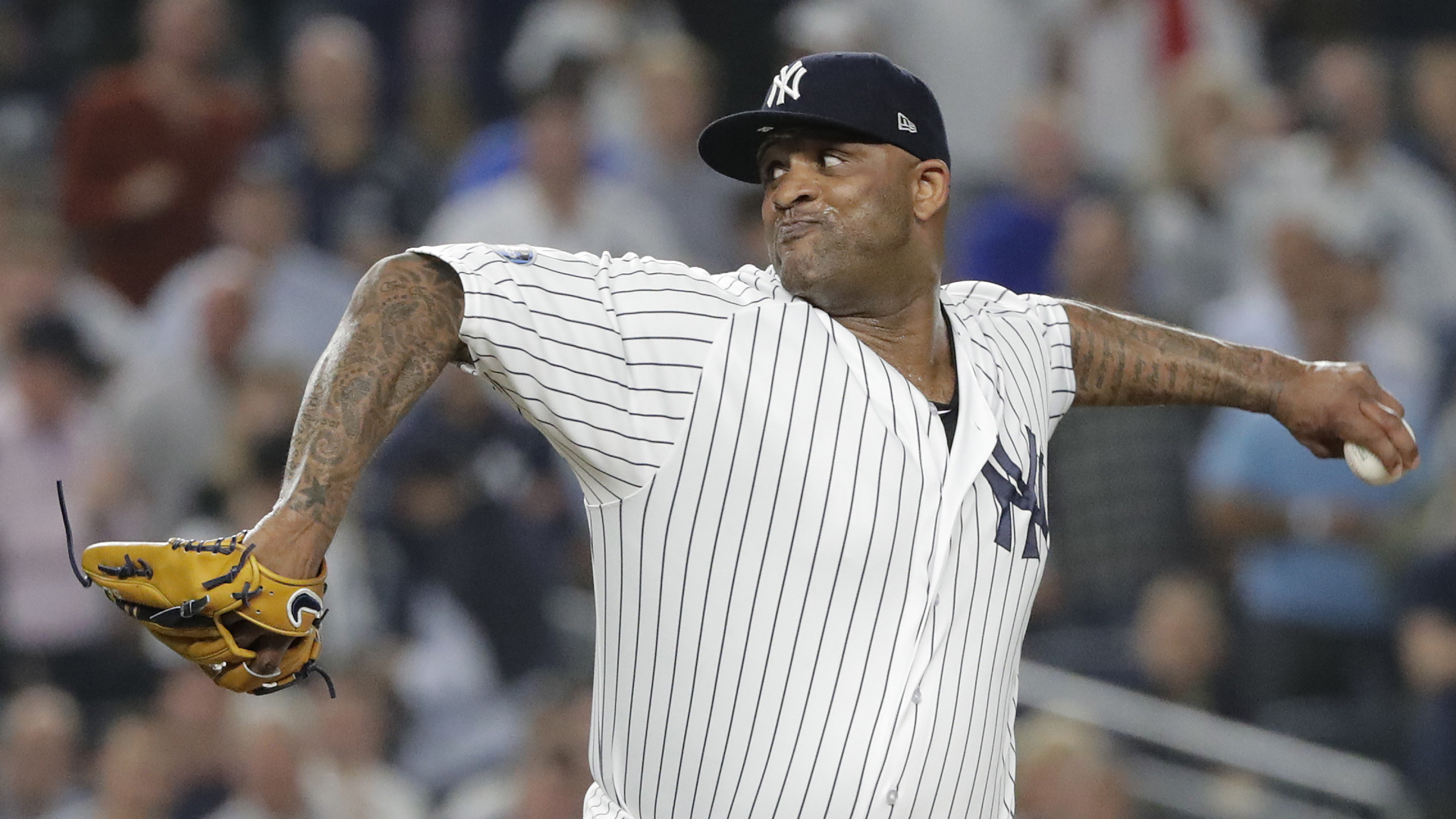 FILE - In this Tuesday, Oct. 9, 2018 file photo, New York Yankees starting pitcher CC Sabathia delivers against the Boston Red Sox during the first inning of Game 4 of baseball's American League Division Series in New York. Yankees pitcher CC Sabathia has been cleared to resume working out, including baseball activities. The 38-year-old left-hander had a blockage in one artery to his heart and underwent a procedure Dec. 11 to insert a stent to clear the blockage. Sabathia had a scheduled follow-up stress test Tuesday, Jan. 8, 2019 according to New York, and was cleared to work out.(AP Photo/Frank Franklin II, File)

The Yankees got some bad news Tuesday. Luis Severino, who just signed a four year $40 million extension, was scratched from his Spring Training Start with rotator cuff inflammation in his throwing shoulder. Subsequently, he has been scratched from his opening day start. The very next day, manager Aaron Boone announced that C.C Sabathia would start the season on the injured list as a result of the heart surgery that he had done in the offseason. Sabathia signed a one-year $8 million deal prior to that surgery.

The implications of these injuries will be interesting to see play out. To begin the season, the rotation was set to be Severino, Paxton, Tanaka, Happ, and C.C. Now two of those five are missing, and the Yankees need to fill them out. While there are options still waiting on the free agent market such as Gio Gonzales and Dallas Keuchel, Cashman seems to have no plans of pursuing external help. Instead, the Yankees seem to be prepared to make additions internally. The two most obvious arms to fill the role are Jonathan Loaisiga and Domingo German. Both made multiple appearances last season and showed that they have the ability to pitch on the major league level.

Some concerns have to be starting to rise in regards to Loaisiga, though. He went down with a shoulder injury last season and his Spring Training statistics have been a bit concerning. While he’s looked good at times, it is hard to hide the fact that in seven innings pitched he has allowed five earned runs. In his most recent start, he struck out five and looked great on his first time through the Cardinals lineup. Once the lineup turned around, nonetheless, he looked vulnerable.

Domingo German is the other arm jockeying for a spot in the opening day rotation. Like Loaisiga, German’s 2018 season was cut short by an ulnar nerve injury. It’s never ideal when the top two internal options to enter the rotation are fresh off shoulder and elbow injuries, but it is what the Yankees want to do. German has given up two earned runs and has allowed eight hits in 7.2 innings pitched this spring. He had only given up three hits and allowed zero runs prior to his most recent three-inning appearance against the Tigers on Friday. He didn’t get a ton of help from his defense, but he gave up plenty of base hits.

Despite the injury history, German and Loaisiga will likely be in the opening day rotation in some capacity. The Yankees have not completely dismissed the idea of using the opener (they probably should really consider it) so that is another avenue they could go down as well. Chad Green, Jonathan Holder or either Loaisiga or German would be great options for an opener role.

For now, however, we probably cannot assume the implementation of the opener on the part of the Yankees. They seem fairly set on putting Loaisiga and German into the rotation. After that, though, if someone in the rotation gets injured where do they go? Chance Adams is probably the next one up. Apart from that, it’s Luis Cessa.

Outside of who may be the next man up, there should be some more concern then there seems to be in regards to Severino’s health. Personally, I can’t imagine that his struggles in the latter half of the 2018 season are totally isolated from this injury. While Severino seems unconcerned, shoulder issues can be a recurring, nagging injury. It’ll be interesting to see when he comes back and how he looks when he does, but odds are that this won’t be the last that we’ve heard from Severino’s injury issues.

In regards to Sabathia, it looked like he was ready to hang up the cleats last season. He decided to get back on board for one final ride with the Yankees. I can’t imagine he will be that big of a contributor in the grand scheme of a 162 game season. Maybe the Yankees should look externally after all. Maybe they trust their internal options for certain in-house reasons. They may even try to use an opener. We’ll have to wait for the season to unfold to find out.