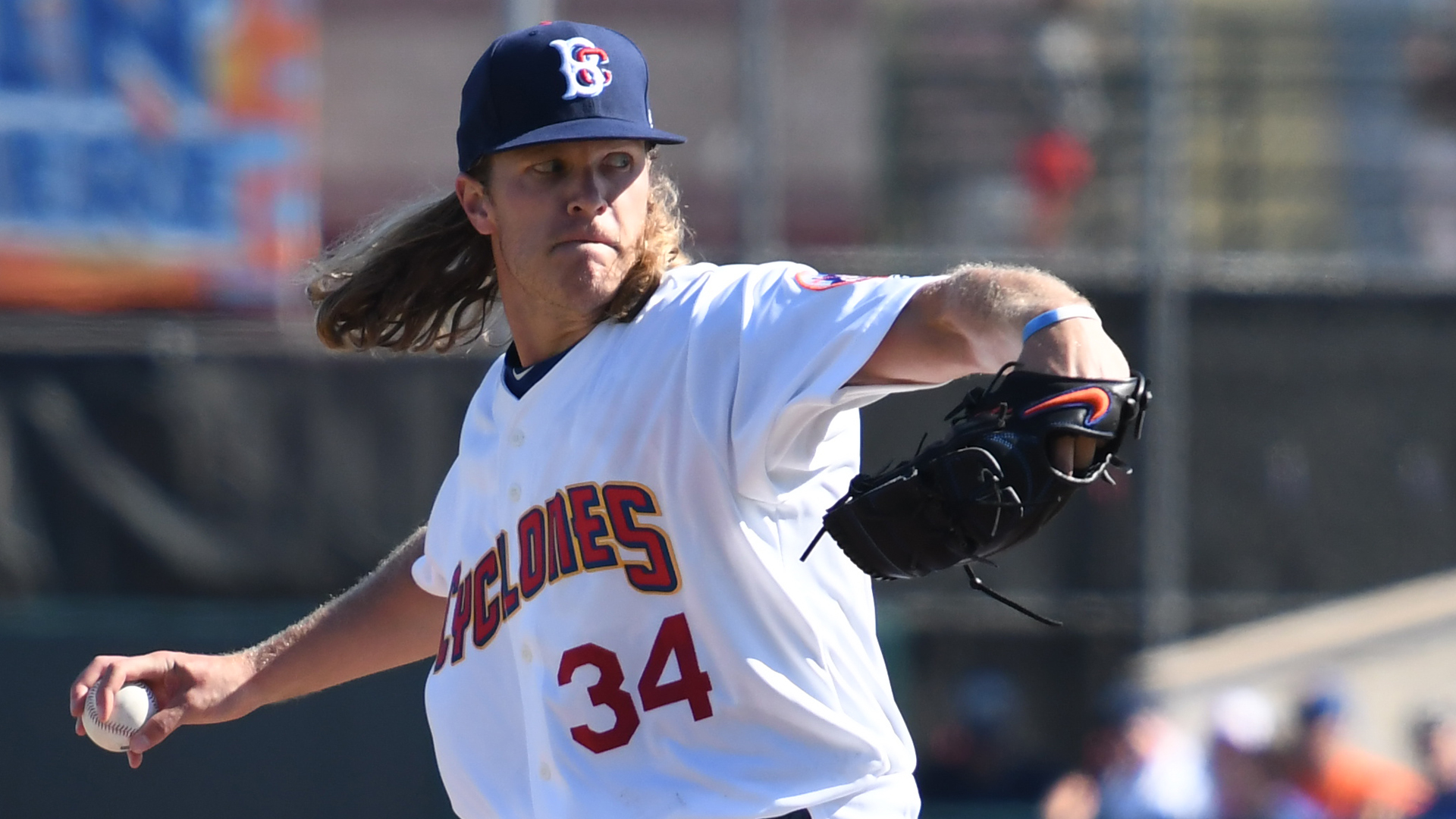 Noah Syndergaard pitching for the Brooklyn Cyclones against the Staten Island Yankees in a rehab start on July 8, 2018. (Robert M. Pimpsner)

Monday night around 10:00 p.m. eastern time something happened.  A Winter Meetings rumor came out that sent Yankees fans into a frenzy, saw Mets fans worried that one of their top pitchers is going to a crosstown rival, and the Marlins could be losing their biggest trade piece.

The rumor, a potential three-team trade that would see the Mets acquire catcher J.T. Realmuto from the Marlins, the Yankees acquire right-handed pitcher Noah Syndergaard from the Mets, and the Marlins getting something of value in return.  It was never mentioned what the Yankees would have had to give up or what the Marlins would be getting in return.

There have been discussions, a source confirms, on a potential 3-way trade between the Mets, Yankees and Marlins that would bring J.T. Realmuto to Flushing and could send Noah Syndergaard to the Bronx.

But that has not stopped the speculation from running wild all night like Hulk-a-mania in the 1980s.

The talk of the casino floors was that Miguel Andujar could be moved in the deal, opening the door for the Yankees to sign free agent Manny Machado. Or is it Yankees current top prospect Estevan Florial, a true five-tool prospect that is seen as the Yankees centerfielder of the future.

As the night turned into morning, the rumor died down a bit as the Marlins reiterated that if they trade Realmuto, they want a major leaguer in return.  As the morning rolled on it was clear that the talks of a potential three-team trade were just that, just talks. 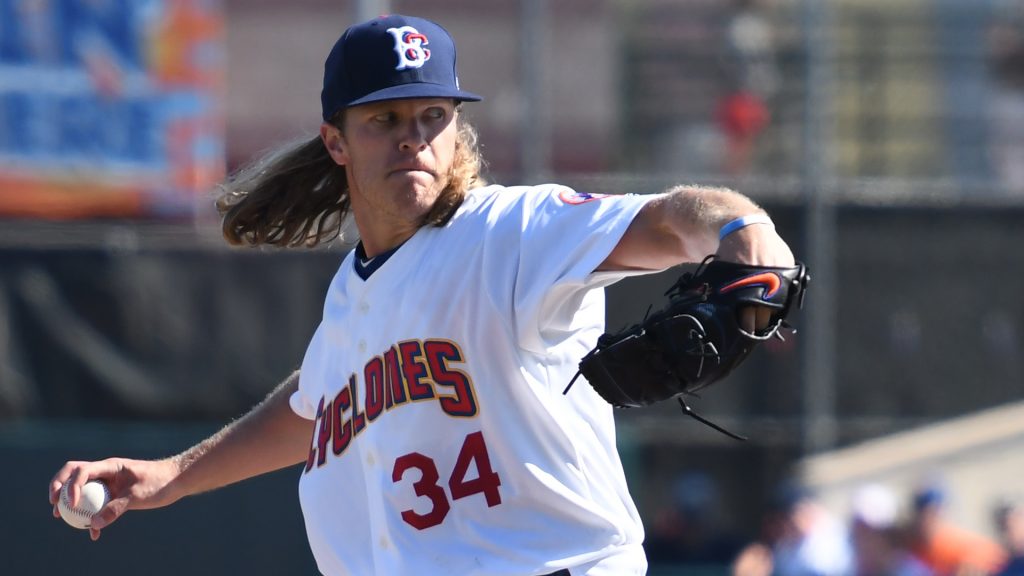 Noah Syndergaard pitching for the Brooklyn Cyclones against the Staten Island Yankees in a rehab start on July 8, 2018. (Robert M. Pimpsner)

The Yankees have found the Mets to be more willing to discuss potential deals with new general manager Brodie Van Wagenen at the helm.  It is important to note that Van Wagenen was Syndergaard’s agent for many years, making him especially privy to information not freely available to those outside the club.

We also have to look objectively at the Mets and what they are doing this offseason thus far. Van Wagenen pulled off one of the biggest moves yet, sending prospects along with Jay Bruce and Anthony Swarzak to the Seattle Mariners for second baseman Robinson Cano, Edwin Diaz, and cash.  The move vastly improved the offense for the team in Queens that is playing in a division that is up for grabs right now.  Would they really move Syndergaard right now when the division is open to anyone?

While Van Wagenen is keeping all options open, he has not shied away from what it would take for him to part with one of his top pitchers.  He would have to be blown away to make the deal happen.  Does getting Realmuto enough? If it was why not do that deal straight up?

I must also ask though if the Yankees see Machado as the replacement for Andujar if he is traded, then why trade Andujar first? That gives Machado additional leverage in contract negotiations and could push his contract into a number that the Yankees are not as comfortable with.

The point being is that this whole thing is a lot more complicated than fans may think.

Source: The Yankees are interested in Mets pitching, not necessarily limited to Syndergaard

Andy Martino of SNY reported that the Yankees are interested in the pitching the Mets currently have, not just Noah Syndergaard.  They have other pieces that could fill the need like Zack Wheeler and Steve Matz who have yet to hit their true potential in the majors.  Wheeler is a hard thrower, that averages 95-96 mph in the majors with his fastball, while Matz is a left that puts good spin on the ball and still throws it in the low-90s.

Many forget about the days not that long ago that Matz was right behind Syndergaard in prospect rankings.  He was at one point the Mets top prospect and named as a future top of the rotation piece in the same breath of Degrom and Syndergaard.

If a three-team trade does happen is it possible the Yankees settle for getting a guy like Matz or Wheeler from the Mets and a guy like Miguel Rojas from the Marlins to fill in at shortstop while Didi is out?

That would be an interesting scenario to me at least.  The Yankees could plug two holes in one trade.  The trade in that scenario may not necessarily mean giving up on Andujar but will give you options.

Rojas himself would be an interesting option for the Yankees.  The 29-year-old is going to enter his sixth season in the big leagues and owns a career slash line of .255/.307/.337 in 511 big league games while playing every infield position and some outfield.

At the very least the potential of a three-team trade with the Mets and Marlins is intriguing.  The opening of dialogue of trades between the Mets and Yankees is a big step and if it does not happen on this deal could lead to something down the road that will help either team make their teams better.