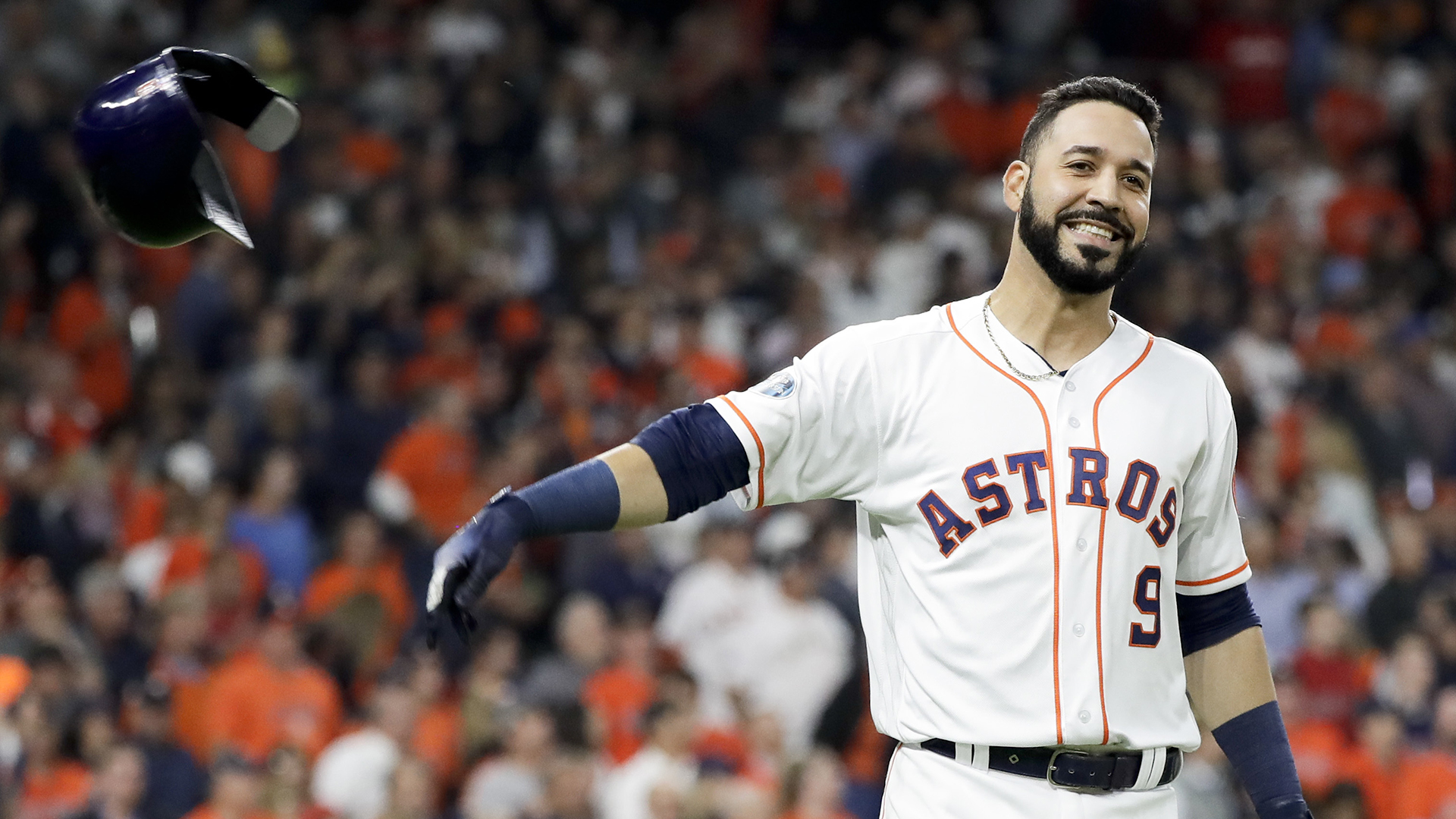 Houston Astros' Marwin Gonzalez tosses his helmet after flying out against the Boston Red Sox during the third inning in Game 3 of a baseball American League Championship Series on Tuesday, Oct. 16, 2018, in Houston. (AP Photo/David J. Phillip)

With the New Year being rung in on Tuesday night, MLB free agency should pick up and turn into an absolute feeding frenzy over the next month. The controversial superstar, Manny Machado, is seemingly set to sign with his new team of choice sometime within the next few days. Once this occurs, the other free agent dominoes should start to fall into place, following the biggest and best infielder finding himself a new home.

Whether New York lands Machado or not, they should be interested in one guy who would unquestionably improve the ballclub the moment he signs his name on a contract. After all, who wouldn’t be interested in a switch-hitting, proven World Series champion who can play all four infield positions along with left field at an above average clip?

The aforementioned mystery player that I speak of is none-other than Marwin Gonzalez.

Gonzalez’ (ex) manager A.J. Hinch said during the 2018 ALCS that “He’s developed into an excellent left fielder… (We) don’t miss a beat with him in the infield. And he’s filled in everywhere… I’m often asked about Marwin and I say, ‘He’s the answer for everything.'”

Hinch also told Jorge L. Ortiz of USA Today back in June that Gonzalez is “an absolute dream for a manager. As far as the versatile, all-everything, Swiss army knife, whenever I have a question on what I should do, the answer is usually, ‘Marwin can do it.’ And I’ve used him accordingly.”

Sounds like a pretty strong backing from one of the most respected managers in the game.

The Venezuelan native, who is represented by Scott Boras, appeared in 145 games last year for the Astros, slashing .247/.324/.409 with 16 homers and 68 RBI after earning a WAR of 4.0 the prior season. The offensive numbers are average to maybe a tick above average, it’s the defensive versatility teams will be lining up to pay for.

The 29-year old played every position but pitcher and catcher this past season for the Astros. He played left field the most appearing there in 73 games, but also made double-digit appearances apiece at first base (24), second base (32), and shortstop (29). Gonzalez even played 19 innings at third base, following a season that saw him play 138.2 innings at the hot corner.

Just a season removed from producing offensively at a 144 wRC+ clip, Gonzalez has surpassed the Cubs ‘super-utilityman’ Ben Zobrist as the best utility player in the big leagues in most eyes. Zobrist inked a four-year, $56 million contract with Chicago just three off-season’s ago. That will most likely be the starting point of Boras Corp’s negotiations with clubs, and rightfully so. It is conceivable that Gonzalez will get $15 million per season across the same four-year span.

How has the Zobrist deal worked out? Pretty damn good. Zobrist was named a World Series MVP just a few short months after signing his contract.

Will Gonzalez follow suit? Only time will tell, but the past gives a promising glimpse.