Opinion: With Didi Out, Give Wade A Chance

It is no secret the Yankees have a hole to fill in the middle infield at the start of the 2019 season.  With Didi Gregorius out due to undergoing Tommy John surgery on his throwing arm, there is a spot open at shortstop in the lineup.  And the Yankees might not need to go far to fill it.

They already have a guy on the roster that might be their best choice to fill in while their all-star recuperates. One that won’t cost them much in terms of dollars, will cost them nothing in terms of prospects.  And one that is aching for a breakout.  That is infielder Tyler Wade.

Yes, that Tyler Wade.  The one that Yankees fans seem to have some disdain for despite never getting a chance to really show what he can do.  It is the same Tyler Wade that the Yankees decided to keep over a popular Ronald Torreyes who was designated for assignment for Parker Bridwell. It is the same Tyler Wade that if it weren’t for the Yankees wasting him away on the bench would still be considered a prospect and a rookie.

That is right. Tyler Wade has only had 124 at-bats. And if it weren’t for him sitting on the bench for as long as he did, he would still be in prospect rankings.  To put that number in perspective that is just a smidge over 50% the number of at-bats a every day player in short-season ball gets.  It is also less than 2 at-bats per game played in the bigs for Wade. 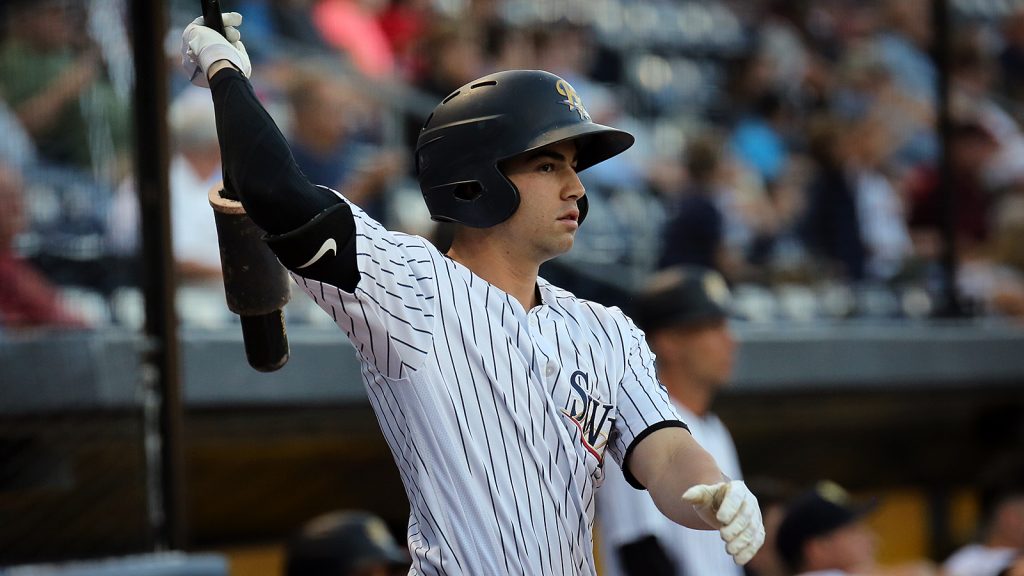 It was not long ago that Tyler Wade was the Yankees top hitter in Triple-A. (Martin Griff)

Wade’s struggles in the majors in just 124 at-bats, spread out over 66 major league games in two seasons have seemed to show fans enough to say he is not good enough for the Yankees.

The fans disdain for a guy that not long ago was considered a better prospect that Miguel Andujar. Yes, you heard that right. Wade was once a higher ranked prospect that last year’s rookie of the year runner-up.

Wade has had an up-hill battle since making his major league debut.  From sporadic playing time, the flu, and going up and down on the Scranton Shuttle.

There is no question that Wade can handle the major leagues defensively.  Not only that he can play multiple positions including second base, third base, and the outfield.  So, it makes sense to use him as a utility player, especially with Torreyes gone.

But I say give him his shot.

But for Wade, fans judge him on 124 at-bats over two seasons in 66 games.  As professional wrestler, Shane Helms might say, “What’s up with that!”

Who is Wade’s current competition in the organization for the role? Hanser Alberto who hit .192/.210/.440 in 182 at-bats over parts of three major league seasons.  Thairo Estrada is working his way back from surgery to remove a bullet in his hip.  Gio Urshela hit .225/.274/.315 in 167 major league at-bats over three seasons but has only 50 games at shortstop in his career.

The Yankees could just slider Gleyber Torres over to short and sign someone to play second. Or they could sign Troy Tulowitzki to fill in while Didi is out.  But both of those situations have their own downside.

You have to ask yourself, why did the Blue Jays release Tulowitzki with three years left on his contract despite being considered a good clubhouse guy and a veteran that could teach the young guys.  They have more medical information than what is public

And with the Torres move.  While shortstop is Torres natural position, there is something to be said for keeping him at second base.  A position he just recently moved to right before making his major league debut.  It would be beneficial for him to remain at second and continue to mature as a fielder there for the foreseeable future.

At this point, most fans are screaming what about Machado.  The big name that fans are clamoring for to wear pinstripes. So much so they are willing to get rid of a guy that just dominated the league in Miguel Andujar.  Signing Machado is a million-dollar solution to a $100 problem.

Now by this point in the conversation fans maybe screaming we need power, we need a hitter, we need this, we need that.

I am not telling you that Wade will replace Didi full-time and he is the heir apparent at shortstop for the next few years.  What I am saying is he has the chance right now to take a spot and make a name for himself.

There is no one in the organization at this point that is blocking him to fill in for the 2-3 months that Gregorius will be missing.  With heavy hitters like Aaron Judge, Miguel Andujar, Giancarlo Stanton, and Gleyber Torres in the lineup every day he would not have the pressure to hit over .300.  All he has to do is hold his own.

What tells me he can hold his own in the majors enough to fill in while Didi is out? His history in the minors, his success he has shown in spring training, and that the only month he was both healthy and got regular playing time he hit .333/.360/.542 in 12 games.  It is admittaly a small sample size.

Am I saying that he is going to be an all-star, that he is going to win the MVP, that he will be a gold glover or a silver slugger?  No.  And anyone assuming that is missing the point.  The Yankees need someone to fill in while Didi is out.  I have said that multiple times throughout the column.  They do not need a full-time player; they do not need someone for the next 2-3-4-5 or 10 years.  They need a player for 2-3 months.

Going with Tyler Wade might not be the sexiest move. But it has the potential to be the one with the best bang for their buck after all the Yankees do love their High Risk, High Reward players. And once Didi is ready to come back, Wade goes back to being the super utility player the Yankees want him to be.