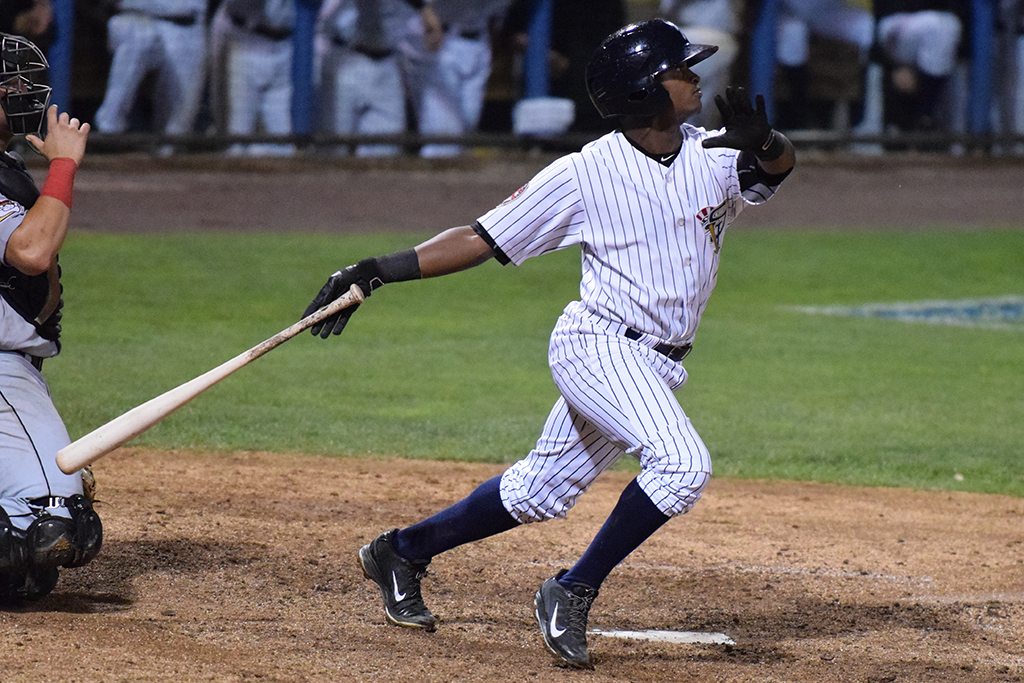 STATEN ISLAND, NY – The Staten Island Yankees now lead the Tri-City Valley Cats 1 game to none after an incredible walk-off victory at the Richmond County Bank Ballpark.  Designated Hitter Junior Valera came up big with speedy infielder Danienger Perez at second base, pinch running for Ryan Krill, to smack a double into right field in the bottom of the eleventh inning to give the Yankees the victory.

The Yankees scored first, plating a run in the bottom of the first inning.  With 1 out Jeff Hendrix singled to center field and then stole second as Ryan Krill struck out before scoring on a RBI double to left by Trey Amburgey.

The lead did not last long as the Valley Cats managed to get a run back in their half of the second inning off of Staten Island starter James Kaprielian.  The New York Yankees top pick in this past year’s draft was as impressive as ever.  Throwing consistently in the low-mid 90s with his fastball, he showed excellent feel for his breaking balls and was economical, throwing just 68 pitches over 6 innings of work.  Kaprielian allowed just that 1 run on 4 hits, he did not walk anyone and struck out 4.

Staten Island would go ahead once again in the bottom of the sixth inning.  With 2 outs Kevin Cornelius reached on a fielding error, moved to third on a single by Thairo Estrada before scoring on a soft ground ball up the third base line by Eduardo de Oleo.

But the lead once again would not last as Tri-City tied it up in the top of the seventh inning.  Yankees 2015 second round draft pick Jeff Degano came into the game to start the inning but allowed a run to score on 2 hits and 2 walks, striking out 2 in his 1 2/3 innings of work.

Right-handed Michael Schaub threw 1/3 an inning allowing a hit before lefty Jonny Drozd took over for the remainder of the game.  Drozd has been impressive out of the bullpen for Staten Island all season and continued that in the post season, earning the win after 3 shutout innings allowing just 1 hit.

Staten Island threatened in the bottom of the tenth inning after they had bases loaded and no outs but a force out sandwiched between 2 strike outs ended the rally.  Pitching coach Butch Henry was ejected after Zehner struck out to end the inning as he exchanged words with the home plate umpire.

In the bottom of the eleventh inning Junior Valera became the hero.  Jeff Hendrix grounded out to short to start the inning but Ryan Krill and Trey Amburgey had back-to-back singles to put runners at first and second with 1 out for Valera.  After Danienger Perez came in as a pinch runner for Krill Junior slapped the third pitch of the at bat to right field, sending the ball over the right fielder’s head and to the wall for the walk-off double.  Perez touched the plate and immediately turned around to join his teammates on the field to celebrate the victory.

With the win the Staten Island Yankees have a 1-game lead in the NY-Penn League Semi-Finals.  Thursday night they will travel to Troy, NY for the second game of the best-of-three series with the Valley Cants.  Powerful right-hander Domingo Acevedo is scheduled to make the start for the Baby Bombers.

Will the Staten Island Yankees be celebrating once again? (Robert M Pimpsner)