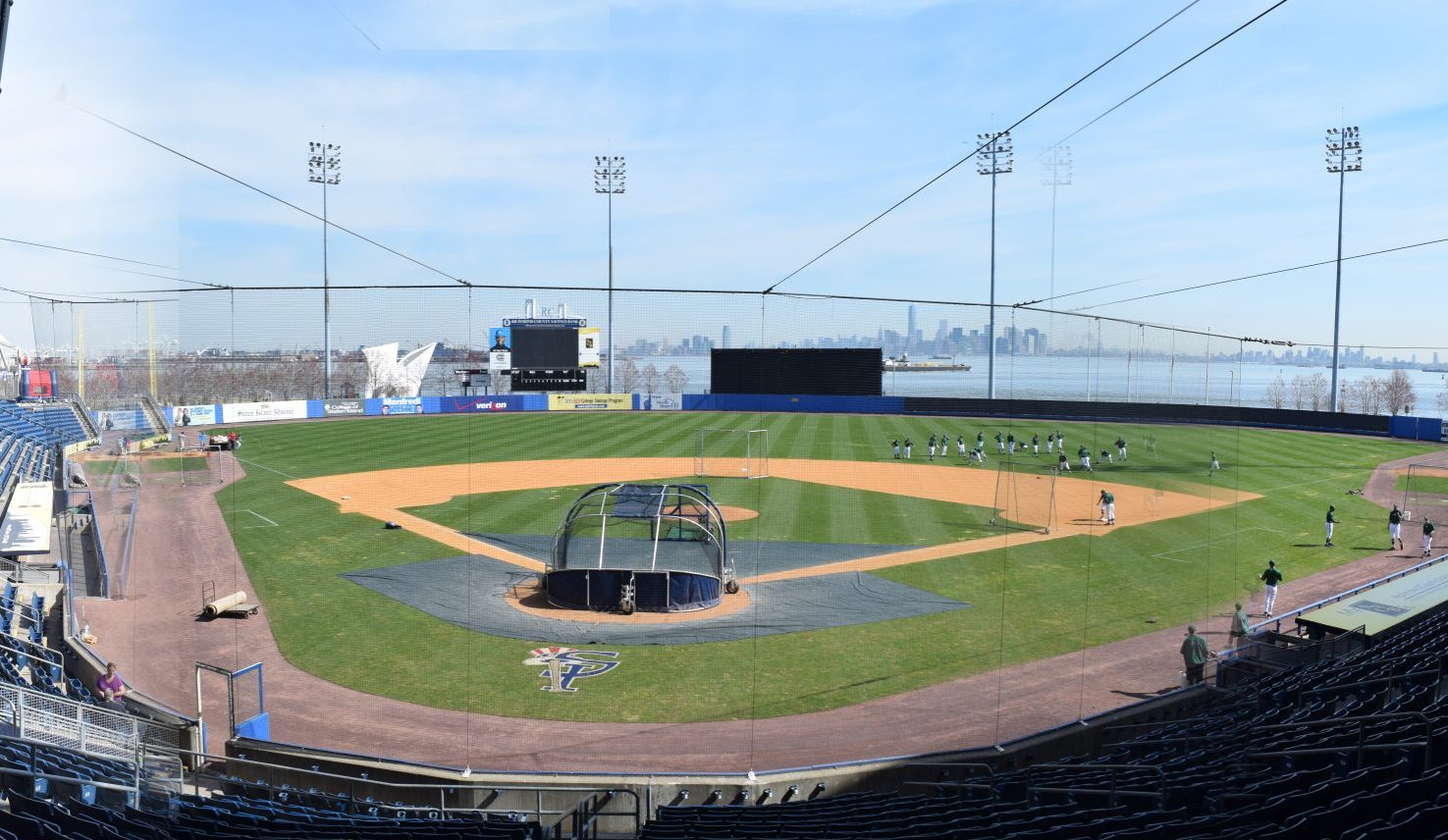 There has been a lot to talk about this week with MLB and MiLB resuming negotiations over the new Professional Baseball Agreement over teleconference yesterday.  Earlier this week, a report by Baseball America and confirmed by the Associated Press indicated that Minor League Baseball has indicated that it will agree to MLB’s plan to contract 42 teams.

While Minor League Baseball released an official statement later in the day that attempted to refute the report, we have been able to confirm that the contraction is indeed on the table, but a lot of logistics will still need to be worked out.

What we do know is that under MLB’s plan most teams that currently the New York-Penn League will be joined by two former Double-A teams to form the new 11-team Dream League. These include the Auburn Doubledays, Batavia Muckdogs, Connecticut Tigers, Lowell Spinners, Mahoning Valley Scrappers, State College Spikes, Staten Island Yankees, Vermont Lake Monsters, and the Williamsport Crosscutters from the NY-Penn League and the Erie Seawolves and Binghamton Rumble Ponies of the Eastern League.  This list reflects the teams that were slated to make up the new league when the initial proposal was made public and does not reflect the current list as that information is not public.

Many of the teams that make up both the Pioneer and Appalachian Leagues would form two new MLB-sanctioned summer collegiate wood-bat leagues, similar to the Cape Cod League.

The Dream League would essentially be an MLB/MiLB supported independent baseball league that would operate somewhere in between the current set up and something more reminiscent of the Atlantic or Frontier League. 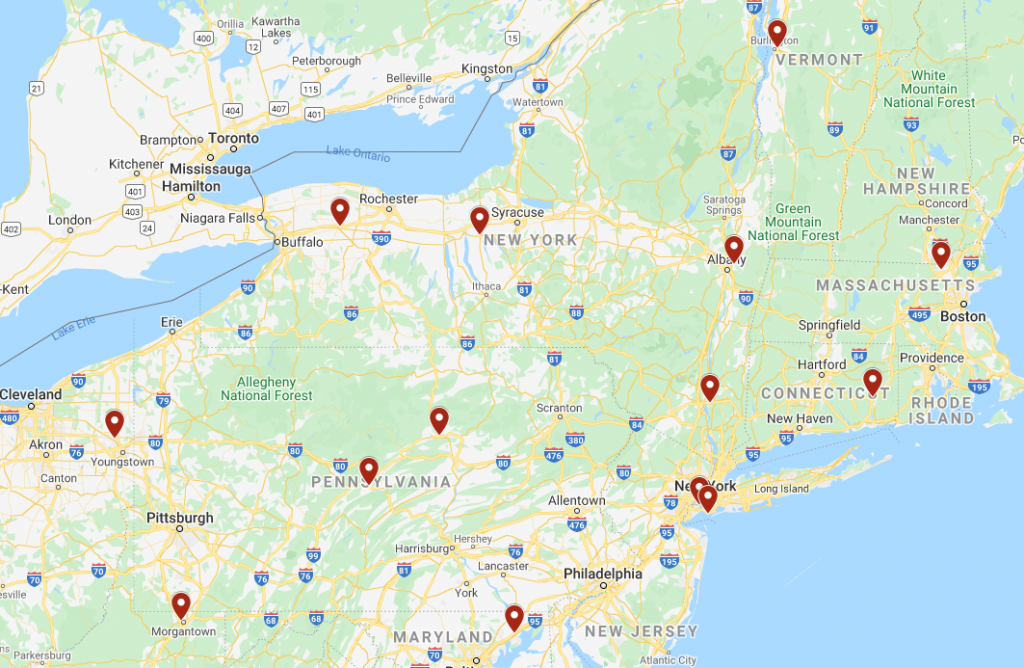 The map of the current NY-Penn League.

The history of independent baseball is somewhat murky, while leagues like the Atlantic League and Frontier League have been around since the 1990s many of the teams do not have long life spans. Over the years a total of 31 independent leagues folded with seven remaining today.

Most recently, the Can-Am League merged with the Frontier League to a new 14-team league. Only two of those teams were around in the 1990s, the Evansville Otters and the Windy City ThunderBolts. The Atlantic League has just eight teams in total, with one being a traveling team that does not have a home stadium and one team has been in operation since the 1990s, the Somerset Patriots.

What is interesting about MLB’s proposed plan is that the league would have two teams, the Sugar Land Skeeters from the Atlantic League and the Saint Paul Saints of the American Association become affiliated teams. 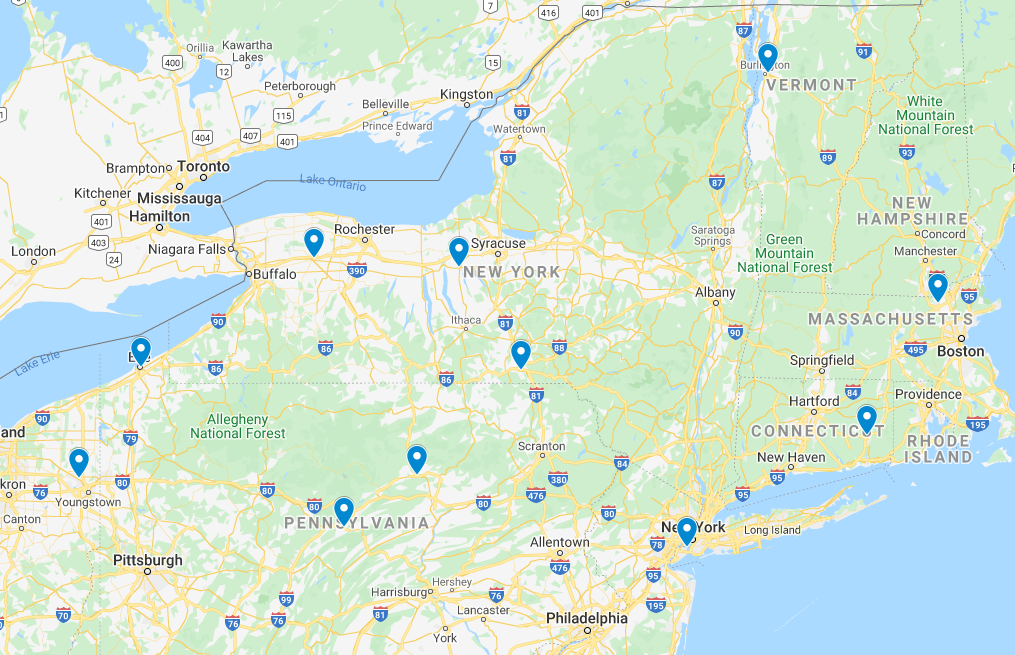 A map of the proposed MLB Dream League teams.

In terms of travel, the map of the New York-Penn League and the Dream League is similar but may offer easier travel for a team like Mahoning Valley. On the opposite side, a team like Staten Island would have worse travel as the closest teams would be reassigned to full-season leagues.  The league itself will also be situated further north than the NY-Penn League.

Stadium-wise the league will be comparable since the teams will be playing in parks that currently are home to NY-Penn League and Eastern League teams.

The main difference to the Dream League from the current set up is that the individual teams will be responsible for sourcing and paying their own players and coaches. This will put an enormous financial burden onto the minor league teams, many of which were already struggling and operating with razor-thin profit margins if they were making a profit.

Some estimates have the additional expense to be between $350,000 to $500,000 per team per year. That could be a huge additional expense for these teams which is why many say the Dream League idea would not be financially realistic. With such high turn over and lower average attendance, the chance of many of these cities to retain the team beyond the first few seasons is low.

The question then turns to source the players. How would the teams be able to scout players with such limited budgets already and likely no 2020 season means they have even lower revenues than before. That means to keep the play quality of the league close to what it is now and to give these teams a fighting chance that means that MLB will need to have a big hand in acquiring players.

There is a lot we do not know about how this Dream League would work. What will the role of MLB in the league be? Who will be responsible for scouting players? What will the quality of play be? Is there a chance for these teams to regain an affiliation agreement?

The truth is that the plan has not been fully fleshed out and the quicker MLB and MiLB come to an agreement the sooner we will have answers.