Saturday night in the New York Yankees organization had one fewer game because of Tampa being postponed. While only four games were played, the organization combined for a 3-1 record with the Triple-A team getting blown out in Buffalo. The big league club found their home run swing, a Charleston first baseman drove in three runs, and Trenton continued their winning streak. Check out more of the key performances from Saturday below:

Scranton Wilkes-Barre Railriders (Triple-A): The Railriders (19-21) were blown out by the Buffalo Bison Saturday afternoon by a final score of 9-2.

L.J. Mazzilli hit his fourth home run of the season in the top of the third inning. He has two home runs in his last three games. (Photo by Cheryl Pursell)

Trenton Thunder (Double-A): The Thunder (27-14) defeated the Bowie Baysox 9-4 and they have now won four games in a row. 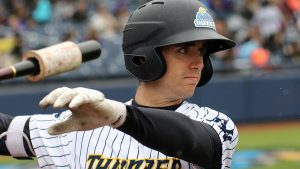 Ben Ruta went 2-for-4 and drove in two runs (11,12) on an RBI single in the bottom of the first and an RBI double in the third. (Photo by Martin Griff)

Tampa Tarpons (Single-A Advanced): The Tarpons (23-18) had their game against the Lakeland Flying Tigers postponed due to rain. They will play a doubleheader on Sunday with Game 1 beginning at 12 p.m ET.

Charleston Riverdogs (Single-A): The Riverdogs (19-23) ended their four-game losing streak with a 5-1 win over the Columbia Fireflies. 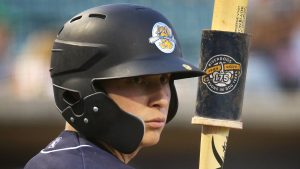