Due to Tampa being rained out once again, the New York Yankees organization had only four teams play on Sunday and it was a mixed result as they combined for a 2-2 record. The big league club continued its power surge and the third baseman in Charleston hit his first home run of the season. Meanwhile, a Trenton pitcher made his debut today on the mound. Check out some of the key performances from Sunday’s action:

New York Yankees (MLB): The Yankees (30-13) clinched their eighth consecutive series win with a 10-1 blowout of the Kansas City Royals.

Scranton Wilkes-Barre Railriders (Triple-A): The Railriders (19-22) were swept by the Buffalo Bisons as they lost Sunday’s game, 4-3.

Zack Zehner hit his fifth home run of the season, a solo shot, in Scranton’s loss to Buffalo. (Photo by Cheryl Pursell)

Trenton Thunder (Double-A): The Thunder (27-15) had their four-game win streak snapped after losing to the Bowie Baysox 10-5. 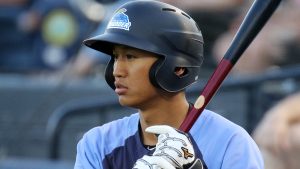 Gosuke Katoh hit a home run for the second straight game (3) in Trenton’s loss against Bowie. (Photo by Martin Griff)

Tampa Tarpons (Single-A Advanced): Rain once again prevented the Tarpons (23-18) from playing baseball as their doubleheader against the Lakeland Flying Tigers was postponed. They will make up the games during the May 29-31 series in Tampa.

Charleston Riverdogs (Single-A): The Riverdogs (19-23) won a low-scoring game against the Columbia Fireflies, 2-1. 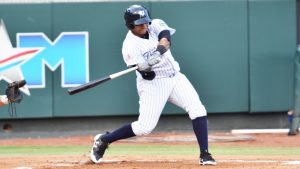