Canaan Smith was 3-for-5 with two doubles in Charleston’s win on Thursday night. (Robert M. Pimpsner)

Due to rain in the northeast, only two games were played in the New York Yankees organization on Thursday since Trenton had their doubleheader suspended. While the Tarpons were blown out, Charleston used a pair of home runs to help them defeat Lexington. Find out who hit those home runs and more in our Pinstriped Performances:

With only two official games taking place on Thursday, who was your Pinstriped Performer of the Night, #Yankees fans?

Scranton Wilkes-Barre Railriders (Triple-A): The Railriders had their game against the Rochester Red Wings postponed due to rain. They will make up the game as part of a doubleheader on July 5.

Trenton Thunder (Double-A): The Thunder had a scheduled doubleheader against the Altoona Curve. However, Game 1 was suspended due to rain with Altoona up 6-0 in the top of the third. Game 2 was postponed due to rain. 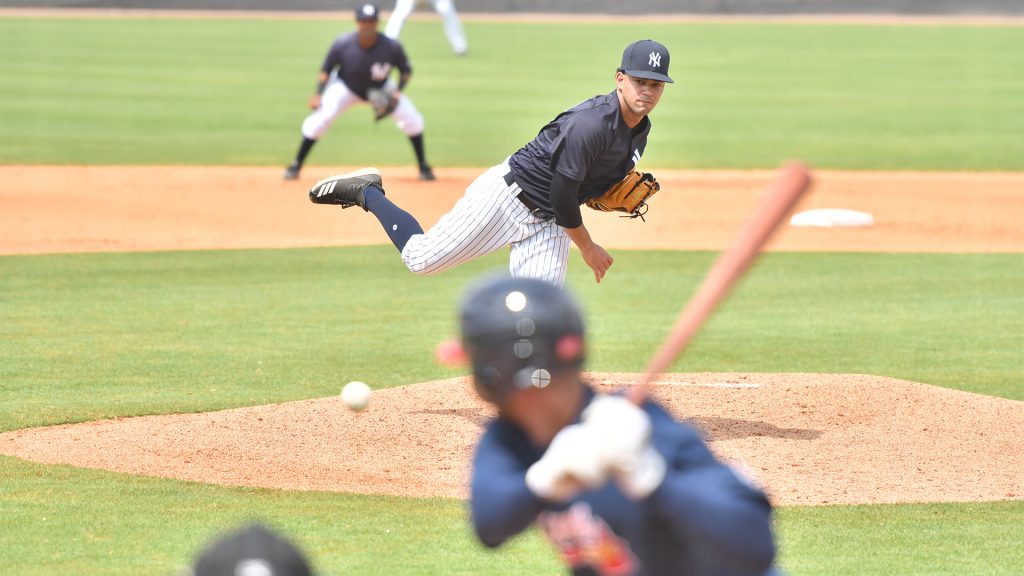 Deivi Garcia got the start in the game for Trenton that was suspended. In 2.2 innings of work, he allowed six runs on seven hits, struck out six, and walked one. 47 of his 69 pitches were strikes. (Robert M. Pimpsner)

Donny Sands went 2-for-4 with an RBI groundout in the top of the eighth (9). Sands has a multi-hit game in four of his last six games. (Robert M. Pimpsner/Pinstriped Prospects)

Charleston Riverdogs (Single-A): The Riverdogs (29-24) began their series against the Lexington Legends with a 7-3 win.

Brandon Lockridge was 1-for-5 with a grand slam in the top of the third inning (7). Lockridge is hitting .336 with five home runs and 23 RBIs this month.  (Robert M. Pimpsner)