On March 24, 2014, Pinstriped Prospects officially launched with the goal of providing the most complete coverage of the New York Yankees minor league system from top to bottom.  Since that time the site has grown by leaps and bounds becoming one of the top Yankees-related blogs on the web.

When we started out our staff consisted of just two writers, working towards the goal of building the site out.  Today we have a staff of 18 with writers and photographers at every level of the Yankees farm system.

Our beat staff is at the games, watching the future Bombers play to make sure we bring you the best analysis possible.  In addition, our insightful columnists break down the farm to give you some of the most complete coverage anywhere.

Here we are three years later, celebrating our third anniversary and going into our fourth season of coverage.  With that we are stepping up our game.

If you haven’t noticed in the last month we have updated our look for the 2017 season with brand new logos.

Introducing for the 2017 season is the Pinstriped Prospects Podcast.  Every Monday we will go through the week that was in the Yankees minor league system, talk about the latest news and bring you reports from every affiliate.

Tune in via iTunes, Google Play or TuneIn Radio and listen to hosts Paul Pagnato III and Robert M. Pimpsner as we give you the opportunity to get to know who is the next group of Baby Bombers coming up through the system.  We will have special guests, player and coach interviews as well as the chance to hear from all the Pinstriped Prospects staff. 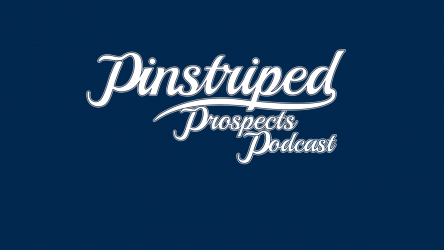 You asked for it and we have answered.  For the 2017 season, we will have expanded video coverage of the entire New York Yankees farm system from the Rookie Leagues to Triple-A.  We will be providing a look at the Yankees prospects before and during games.  In addition to game footage we will be bringing you select video interviews throughout the season.

With our expanded video footage, we will be going live more this season on Facebook.  Giving you the chance to interact with our staff like never before.  We will bring you pre-and-post game analysis, live fan Q&A’s and more.  Make sure you like our page on Facebook and turn on notifications so you don’t miss a thing.

Introducing Our Writing Staff for 2017

While we have, many returning faces in 2017, we will also be welcoming several new writers and photographers to our staff.  Returning this season in Trenton is Matt Kardos, who will continue to bring some of the best coverage of the Yankees Double-A affiliate.  Also, returning for their second seasons with Pinstriped Prospects are Antonio Mendes and Joseph Dixon in Tampa and Charleston respectfully.  Gershon Rabinowitz returns to bring cover of the Staten Island Yankees this season.

Joining us for the 2017 season are Vito Malacari and James Vlietstra who will be providing coverage of the Triple-A Scranton/Wilkes-Barre RailRiders in 2017.  Also, joining us in 2017 is Michael Cambria who will be working as a part of our draft team and other areas.

Rob Terranova is bringing years of experience behind the pen and the mic to Pinstriped Prospects in 2017.  He has covered teams such as the San Diego Padres, San Diego Chargers and Lake Elsinore Storm for the North County Times.  He also worked as a sports reporter for the San Francisco Chronicle and most recently served as the play-by-play commentator for the Brockton Rox of the Futures Collegiate Baseball League.  He will be bringing his skills to covering the Staten Island Yankees and the Pulaski Yankees in 2017.

Veteran minor league reporter Jessica Quiroli will be returning to Pinstriped Prospects this season as a columnist.  Twice a month she will be highlighting the progress of the Yankees top prospects in Stars, Heels, and Stripes.  Be sure to check it out and go beyond the box score to learn more about the up and coming Baby Bombers with analysis and video.

Also, every morning be on the lookout for our daily Pinstriped Performances and Baby Bombers in the Show features which will quickly highlight the top performances at every level of the Yankees farm system the previous day.

In the effort to bring you the most well rounded prospect coverage around we will have photographers at every level of the Yankees minor leagues with Bryan Green returning to photograph the Gulf Coast League Yankees and the Tampa Yankees.  Paul Pagnato III will bring you photos from the Pulaski Yankees this season, marking the first time we will be getting regular photos from the Yankees’ Appalachian League affiliate.

Robert M. Pimpsner and Eduardo Amaro return this season to bring you photos from the Staten Island Yankees while joining the Pinstriped Prospects team in 2017 in Charleston is Jerry Coli.  Coli brings years of experience as a sports photographer having previously covered Charleston the past two seasons for another publication.

Veteran photographer Martin Griff is returning to Pinstriped Prospects in 2017 to bring you high quality photos from the Double-A Trenton Thunder.  In Scranton/Wilkes-Barre Cheryl Pursell returns to photograph the RailRiders.

This coming June is the 2017 First-Year-Player Draft and Pinstriped Prospects has you covered.  We have built a team of six writers who will be covering the draft this season.  Be on the lookout for draft previews, coverage of the various mock drafts and on draft day we will be bringing you live coverage of the 2017 draft.  Our live draft tracker will return for 2017, we will also be providing profiles of every player the Yankees draft.  Our most popular draft coverage will also return in 2017 as we will be interviewing the players the Yankees draft beginning day one.

We are also rebranding our email newsletter for 2017.  It is our pleasure to introduce to you Pinstriped Prospects Daily.  Every day at 6:30 AM our email newsletter will go out to our subscribers and bring you a daily digest of what happened the day before on the site.  You will be able to catch up on news, game results and more.  Subscribe now on PinstripedProspects.com