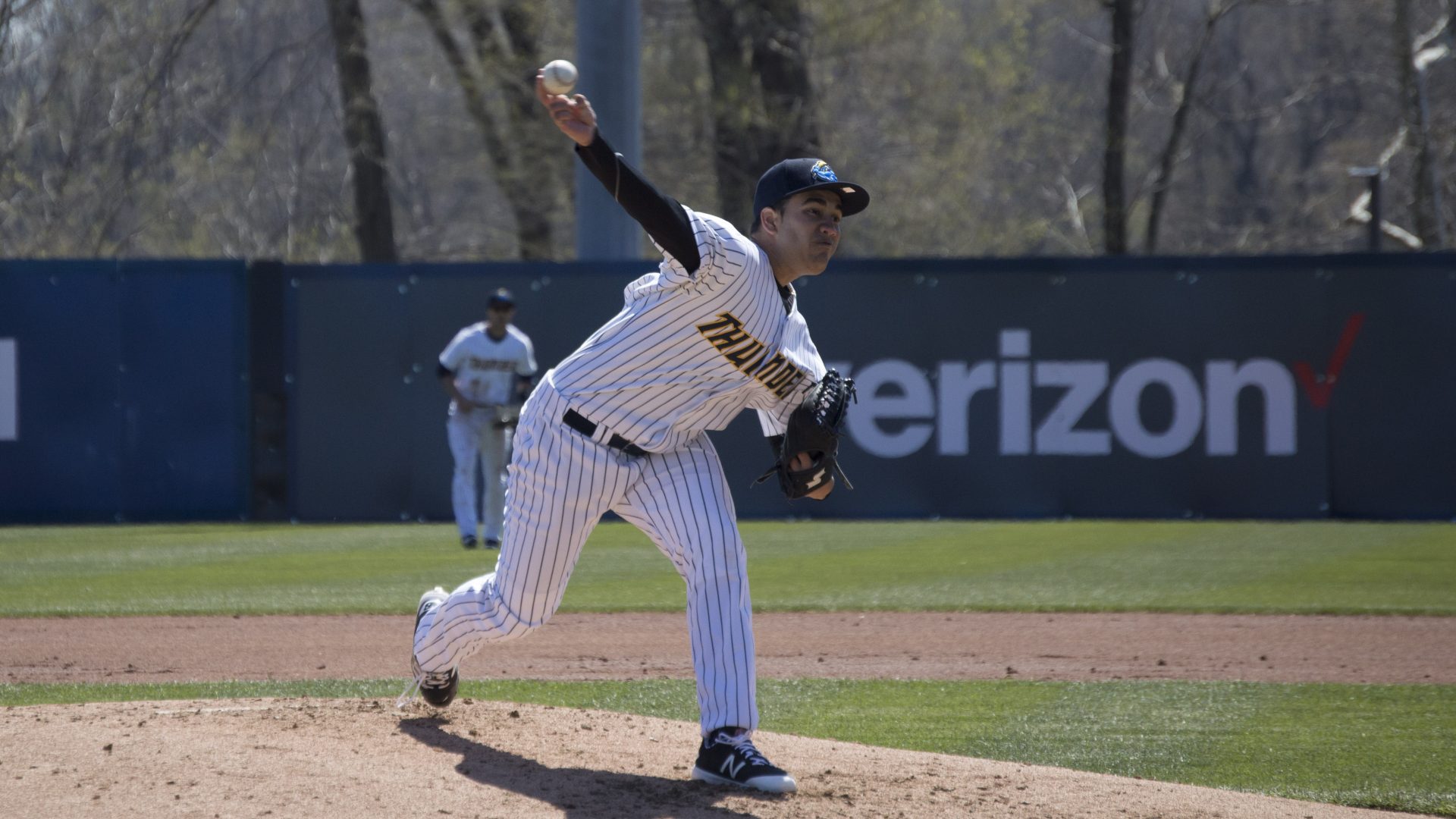 Ronald Herrera had an impressive debut for the Thunder Sunday afternoon. (Photo by Steve Eggert)

TRENTON, NJ – The trade, at the time, attracted a bit of attention. Last Nov. 11, the Yankees sent infielder Jose Pirela, who had played in 44 big league games with them in 2014-15, to the San Diego Padres.

In return they received right-handed pitcher Ronald Herrera, a former Top 20 Oakland Athletics prospect whom the Padres had obtained the year before. The native of Maracay, Venezuela, had originally signed with Oakland in 2011 for a modest bonus of $20,000.

During Spring Training, and after the Trenton Thunder, the Yankees Double-A farm team, came north, queries were put forth about Herrera, the mystery man who was part of the 2016 Trenton rotation.

“This kid, for a 20-year-old, is a polished pitcher,” said Thunder manager Bobby Mitchell. “He’ll be in our rotation. He earned the spot.

“He’s very sneaky with his fastball. Hitters just don’t react to it.”

Sunday, the 5-foot-10, 185-pound Herrera made his Thunder debut. To say he was as good as advertised is an understatement. For Pirela, the Yankees received a young pitcher who has a plan and could easily fit as a back-of-the-rotation starter by late 2017 or 2018.

“I am happy to be a Yankee, no doubt,” said Herrera Sunday after throwing 5.1 innings, 89 pitches and 62 strikes, limiting the Erie Seawolves to a single run in a 6-2 Trenton win before 4,034 fans at ARM & HAMMER Park. “To get traded for a big- leaguer is a good feeling.

“One thing I will is make sure is I do my job here, and show them they made the right trade”

First impressions were impressive. Herrera sets up his 90-91 mph fastball with an outstanding curve, which spins over the plate at 70-71, an effective changeup and a cut fastball that is improving. He can throw all for strikes.

“He certainly has a feel for it,” said Thunder pitching coach Jose Rosado. “He puts the ball where he wants to. He’s able to to hit the glove, that’s for sure.”

Herrera agreed with his coach.

“My fastball command was good,” he said. “I was able to throw my breaking balls from behind in the count. I was able to keep them (Erie hitters) off-balance.”

And, as Rosado mentioned, made that 90-91 fastball much more effective. Herrera has only walked 100 batters in 420.1 minor-league innings. None Sunday.

“When you are near the plate, like Ronald was today, you get swings on pitches that are a bit off the plate,” he said. “Then, that fastball looks like it is 94.”

Herrera, after giving up a run in the first inning – where he had a momentary scare – settled down and handcuffed the SeaWolves hitters. A shot off the bat of veteran Alberto Gonzalez hit him just below the shoulder After a short delay, and a few warmup pitches. Herrera continued.

“It hit him right below the scapula (shoulder blade),” said Mitchell. “He pitched right through it. He was outstanding. For a 20-year, old, he is really poised. This is what we saw in Spring Training. You wonder if it will be the same when the season starts.

“The season is here. We’re seeing the same clean delivery and poise. He nay be a bit stiff there, but nothing more.”

Herrera, who ends his delivery by turning his back to the plate, was not concerned.

While Sunday was Herrera’s first Thunder and Eastern League win – game-time temperature was 39 degrees and did get into the upper 40s during the sunny afternoon – it was not his first Double-A triumph. He made eight starts in the Texas League for San Antonio in 2015, recording a 3.1, 4.53 mark for eight starts – earning a Pitcher of the Week honor – in what is a hitters’ loop.

The Eastern League, on the other hand, with its early cool-weather play, is a noted pitchers’ aggregation. Herrera noticed the different environment.

“It (the weather) was a lot different from the Texas League, ” he said. “I got used to the cold.  I have pitched in cold before, As a pitcher, you get warmed up. You don’t feel it.”

Mitchell has learned Herrera deals with it as it comes,

“For as young as he is, nothing bothers him, outwardly at least. We’ve never seen him stressed.”

From what Herrera displayed Sunday, he puts all that on the hitters.