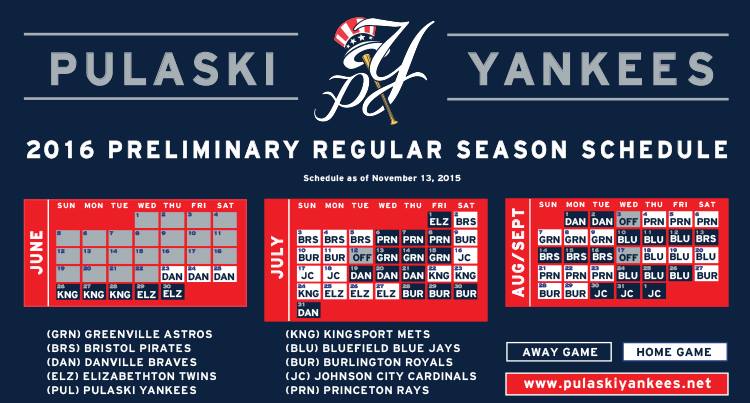 The Pulaski Yankees have announced their 2016 season scheduled and they will open up the year at home with a 3-game set with the Danville Braves.  The P-Yanks ended their inaugural campaign with a 45-23 record, losing in the semi-finals to the Princeton Rays.

In their first season as an affiliate of the New York Yankees, the Pulaski Yankees lead the entire Appy-League with a total attendance of 57,023 fans, good for an average of 1,677 fans per game in 34 openings.  The affiliate is looking to capitalize on that success with new additions to the stadium.  The owners are investing an additional $500,000 in upgrades to the historic ballpark that should help improve the fan experience.

As for on the field, it is not known yet if veteran manager Tony Franklin will return to the Rookie-level affiliate for the 2016 season but it would not be a surprise after the team made it into the playoffs in their first season.