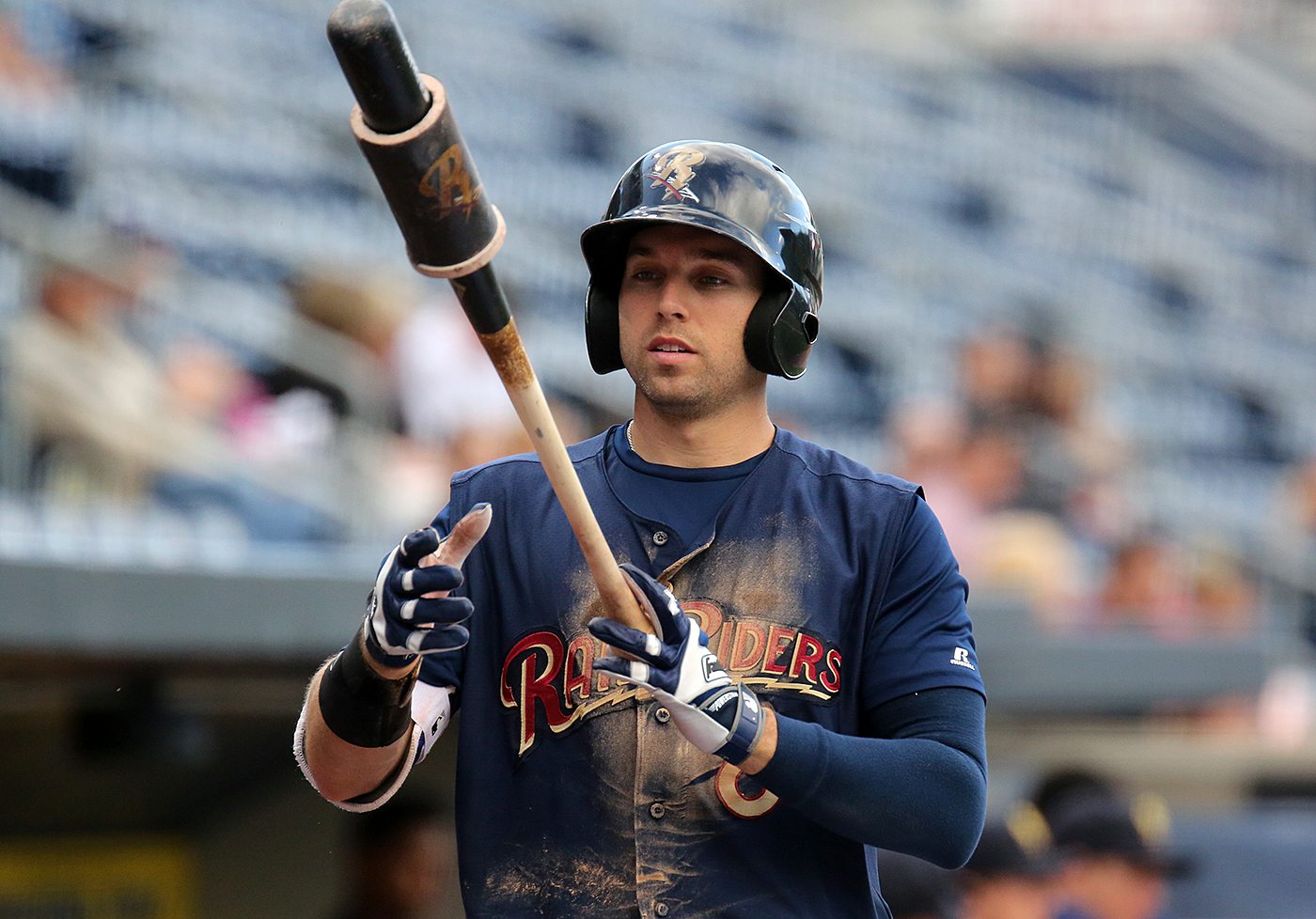 Scranton/Wilkes-Barre RailRider's Jake Cave on deck against the Charlotte Knights at PNC Field in Moosic, Pa. on Tuesday, June 7, 2016. Photo by Martin Griff

It was a wild first game at PNC Field between the RailRiders and Chiefs with Scranton/Wilkes-Barre falling 4-3 in heartbreaking fashion.

With a 3-2 in the top of the seventh the Chiefs were able to scratch across two runs against Tyler Jones. The tying run came on a double by Spencer Kieboom and the eventual winning run scored on a Jones wild pitch. It was Jones’s second wild pitch of the inning. With the loss he falls to 5-2 with a 3.93 ERA

For the RailRiders the offense came on three swings. Solo home runs by Dustin Fowler, Jake Cave, and Mark Payton accounted for all of the RailRiders runs. Fowlers home run was his 12th which ties him for the team lead with Clint Frazier.

Lost in game one is how good Bryan Mitchell pitched. The hard throwing right hander pitched 4.1 inning allowing one hit which came against Keiboom. Mitchell had good fastball control and sharp break on his curve ball. He continues to be on a pitch count. He finished Tuesday night’s game with 67 pitches, 43 of them were for strikes.

“It was definitely a step in the right direction. The main thing today was fastball command.”. said Mitchell. “The more I throw the curve the better. It’s a big pitch for me. It helps my fastball and keeps guys off balance.”

Mitchell has been on a pitch count and said he knew he was tapped out at around 65. That is the most pitches Mitchell has thrown in a game all season.

Manager Al Pedrique found the clubhouse to be quite after game one but had some encouraging words for his RailRiders team.

“When I came back after the first game they were all quiet and I “asked what? happened who died?” We just lost the game. Now we have another game to play. Let’s go out, compete, put pressure on the defense and I am sure we can go out and win the second game.”, said Pedrique.

Tyler Austin eased the RailRiders pain a bit with a long three-run home run to center field in the first to give his team a 3-0 lead early.

“It was big. It gave us the lead early and in games like this, it was big.”, said Austin. “It was a tough loss in the first game but it was a quick turnaround so we had to answer the bell in game two. It was a great team win.”

Syracuse would scratch back with two unanswered runs but the Ji-Man Choi hit a bases clearing triple in the bottom of the fifth to blow the game open at 6-2.

Matt Wotherspoon relieved him and was also very effective. Wotherspoon was awarded his first Triple-A win of the year. Over his 3 innings of work he allowed three hits.

“I did a better time attacking hitter today than I did last time out. I was ahead in the count and I thought I did a better job of attacking”, said Wotherspoon. “I was just trying to go as long as I can and give my team a chance to win. Joe (Mantiply) threw a great three innings today and we knew it was going to be a bullpen kind of day.”

Wotherspoon is a Mountain Top native so PNC is a home field advantage that his family as well.

J.R. Graham closed the game but not in the easiest of ways. Syracuse brought the tying run to the plate in the form of Brandon Snyder, but Graham induced a groundout too short to end it.

Pedrique said after the game that Tyler Wade would be getting a day of Wednesday night. He plans on rotating days off in the near future.