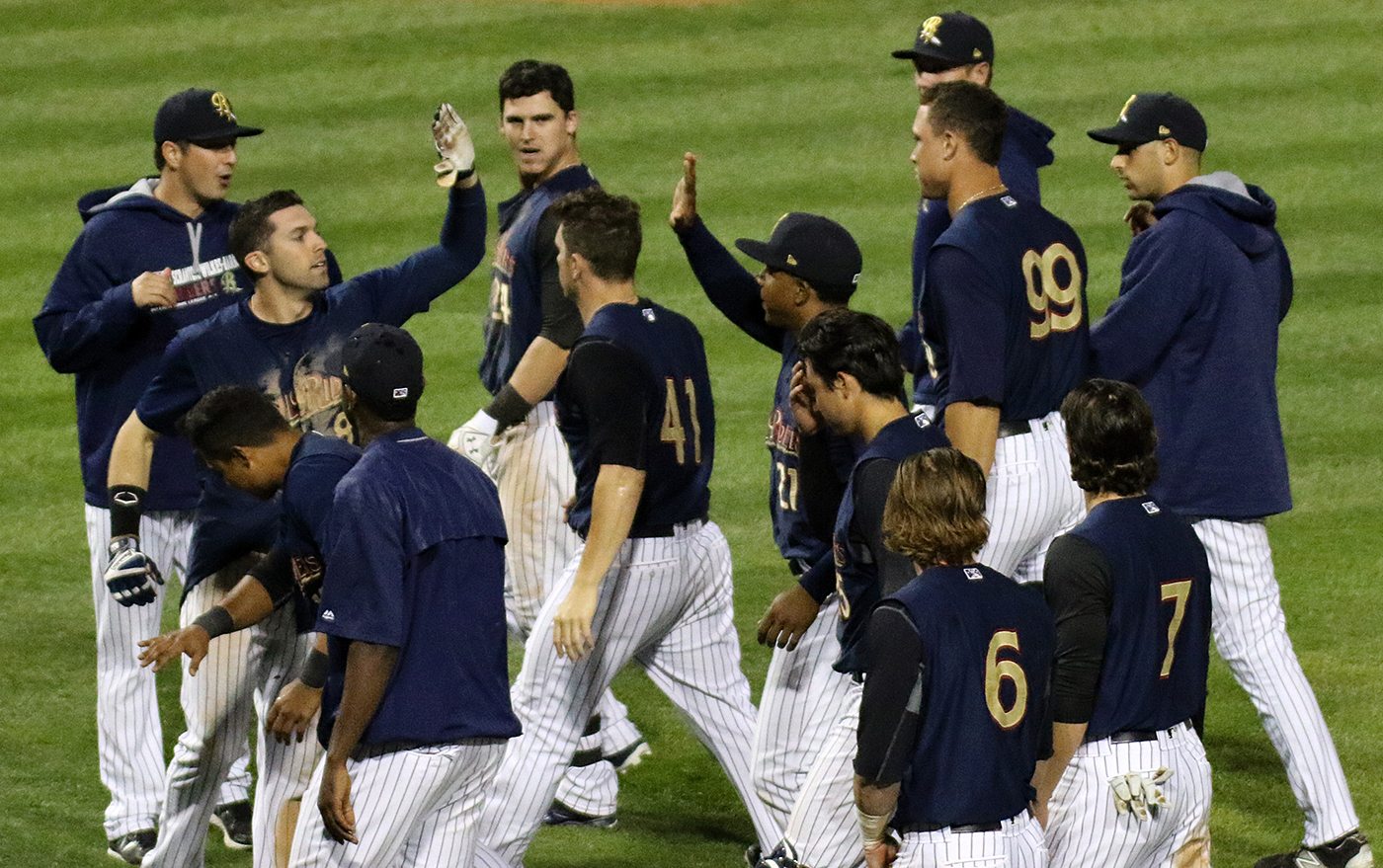 Scranton/Wilkes-Barre RailRider’s 8 Jake Cave (with glove) high fives teammates after walking with the bases loaded in the bottom of the 9th inning to win the game 11-10 against the Charlotte Knights at PNC Field in Moosic, Pa. on Tuesday, June 7, 2016. (Photo by Martin Griff)

MOOSIC, PA – The SWB RailRiders (Triple-A/ New York Yankees) out-slugged the Charlotte Knights 11-10 to snap a three-game losing skid Tuesday night at PNC Field. Jake Cave worked a bases-loaded walk in the last of the ninth to force home Pete Kozma as the winning run. The RailRiders improve to 32-27 while the Knights slip to 30-30 overall.

The RailRiders set new season-high marks for a single game by scoring 11 runs and collecting 18 hits. The game featured a combined 21 runs and 29 hits.

Mark Montgomery (1-0) took home the victory after allowing the two tying runs in the top of the ninth. Brad Goldberg (0-3) shouldered the loss, allowing one run on two hits. He walked four batters and struck out three in his two innings.

SWB jumped out to a 5-0 advantage in the first stanza, highlighted by Kyle Higashioka’s two-run homer to right. It was his third round-tripper in eight games with SWB. The Knights scored four runs of starter Tyler Webb in the third and three more against reliever Diego Moreno in the sixth.

HIgashioka finished the night with four hits in five at-bats, falling one knock shy of the SWB franchise record. Tyler Austin tallied three hits and three RBI, including a bases-loaded, two-run single in the fourth for an 8-5 advantage. Nick Swisher had two run-scoring singles and reached twice on walks.

Aaron Judge collected three hits. He is 9-for-19 over his last five games. Ben Gamel completed his night with two hits and two walks.

Down 10-8 in the ninth, the Knights’ Vinny Rottino singled to center, scoring the two tying runs.

Pete Kozma sparked the winning rally in the last of the ninth by doubling down the right field line. With two away, Gamel was intentionally walked. Judge worked another base-on-balls of Goldberg and a patient at-bat by Cave resulted in the game-winning walk to force in Kozma.

The RailRiders continue their series against the Charlotte Knights with “Bellybuster Wednesday” at PNC Field. First pitch is set for 6:35 p.m. Right-hander Luis Severino (0-0, 7.36) starts for SWB against right-hander Jacob Turner (3-3, 5.50). For tickets or more information, please call 570-969-BALL (2255) or visit swbrailriders.com.