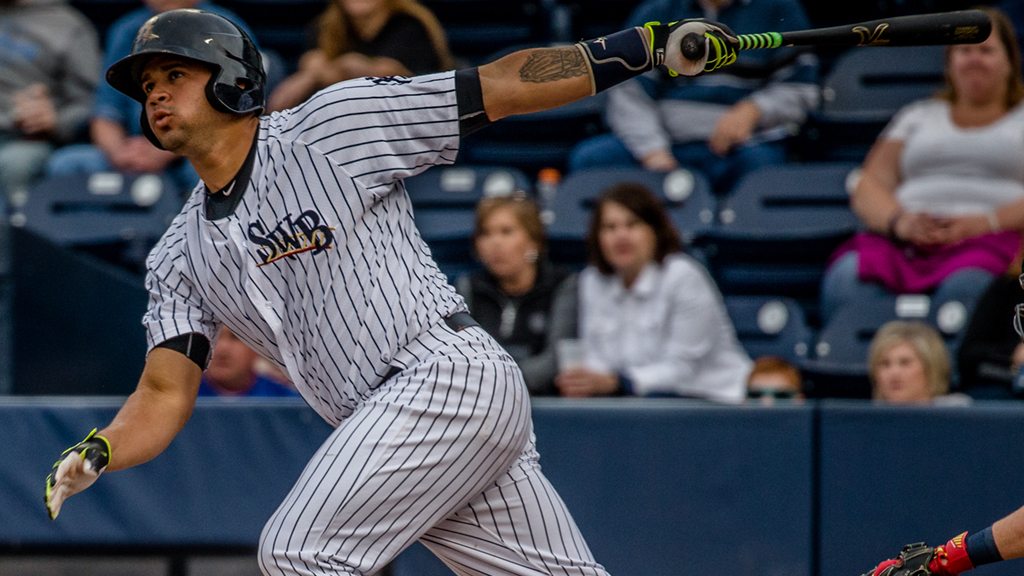 The Scranton/Wilkes-Barre RailRiders took a 3-4 extra inning loss tonight in front of 5,823 fans against the Lehigh Valley Iron Pigs in Scranton’s 41st home game of the 2016 season. The loss snaps the RailRiders nine-game winning streak.

Scranton took an early lead when Ben Gamel led off the bottom of the first inning with a towering home run to left field. It was his first home run of 2016 at PNC Field, and his fourth of the season. After a Jose Rosario fly out and Aaron Judge walk, Gary Sanchez slugged an opposite field two-run home run on a line-drive missile hit off of Lehigh Valley soft-tossing left-handed starter Anthony Vasquez.

The Iron Pigs responded with a two-run top of the second inning. Brock Stassi hit a deep RBI sacrifice fly to right field off of RailRiders starter Phil Coke. Cam Perkins pulled Lehigh Valley within one run in the next at-bat, with an RBI single on a line-drive to left field.

The game remained scoreless until the Iron Pigs tied up the game in the top of the fifth inning. Lehigh Valley loaded the bases with a leadoff walk and back-to-back singles. Nick Williams hit a sacrifice fly to center field to plate Emmanuel Burriss.

J.P. Crawford gave his team its first lead of the night in the top of the 10th inning when he sent a 2-0 fly ball over the right-field wall for a leadoff home run. This marked just the fourth time that Scranton has trailed in a game since June 25th.

International League All-Star closer Edward Mujica recorded his 22nd save, as he entered the game in the top of the 10th inning. Mujica retired Jose Rosario, Aaron Judge, and Gary Sanchez in order to give Lehigh Valley their ninth extra-inning victory of the season.

Offensively, Scranton struggled mightily with runners in scoring position. They went 1 for 10 as a team with runners in scoring position and left 13 stranded on the base paths. Ike Davis has continued to struggle at the plate since his recent demotion to Triple-A. Davis is hitting a measly .158 and struck out three times in four plate appearances tonight (5 runners left on base).

Phil Coke was the second RailRiders starter to get hit pretty hard by an Iron Pig team that has three of the Philadelphia Phillies top four prospects. Coke nibbled around the strike zone all night and was hurt when he left pitches up. He allowed three earned runs over his last seven starts, before allowing three tonight.

Johnny Barbato and Nick Goody were both unhittable in three combined relief innings. Barbato tossed two scoreless innings and recorded a strikeout. Goody also struck out one over an inning of work.

It was announced earlier today that Yankees top prospect Aaron Judge (16 home runs) will participate in the 2016 Harris Teeter & Tide+ Triple-A Home Run Derby presented by Clariant. The derby will take place on Monday, July 11th at BB&T Ballpark in Charlotte, North Carolina. The event should provide a plethora of action for the fans as the ballpark has seen more home runs hit in it than any other International League stadium since its opening in 2014. Former Yankees farmhands Rob Segedin (13 home runs) and Jesus Montero (9 home runs) will also be competing in the field of six as well.

Prior to tonight’s contest, Chasen Shreve was recalled to New York while Luis Cessa was optioned back to Scranton in a corresponding move. Vinny Pestano was reinstated from the Disabled List and was subsequently released from his contract.

Dietrich Enns (2-1, 0.96 ERA) is set to face off against John Anderson (1-2, 4.91 ERA) as the RailRiders return to action tomorrow night against the Buffalo Bisons. First pitch is scheduled for 7:05 pm.