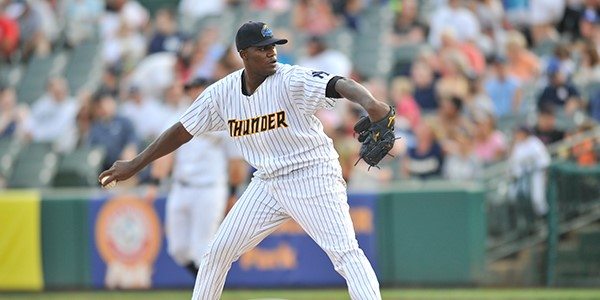 TRENTON, NJ – The Reading Fightin Phils took the weekend series from the Thunder with a 2-0 decision Sunday afternoon in front of 5,524 fans at ARM & HAMMER Park.

With the defeat, the Thunder fall 7.0 games back of the Fightin Phils for the Eastern Division lead and 3.5 back of Binghamton for the Wild Card.

Reading grabbed both runs in the game off rehabbing  Yankees RHP Michael Pineda in the top of the third inning. With one out, Harold Martinez singled and moved to second on Brian Pointer’s groundout. During Nick Williams’ at-bat Thunder catcher Eddy Rodriguez attempted to pickoff Martinez and saw his throw go into center field and allow the Fightin Phils to take a 1-0 lead.

Williams then tripled to center and J.P. Crawford tripled him home to grab a 2-0 advantage for the visitors.

Danny Oh went 2-for-3 with a walk to lead the Thunder offense, he reached in 6-of-his-8 plate appearances in the series. 1B Rob Segedin saw his season-best 12-game on-base streak come to an end on Sunday afternoon.

Sunday was also the eighth time this season the Thunder have been shutout.

Your Thunder will have an off-day on Monday before beginning a three-game series in Bowie against the Baysox. RHP Jaron Long (3-4, 4.24) will start the opener for the Thunder, RHP Gene Escat (1-4, 3.19) will go for Bowie. Listen live to Thunder baseball on 91.3 WTSR and online at Trentonthunder.com beginning at 6:50 pm on Tuesday evening.