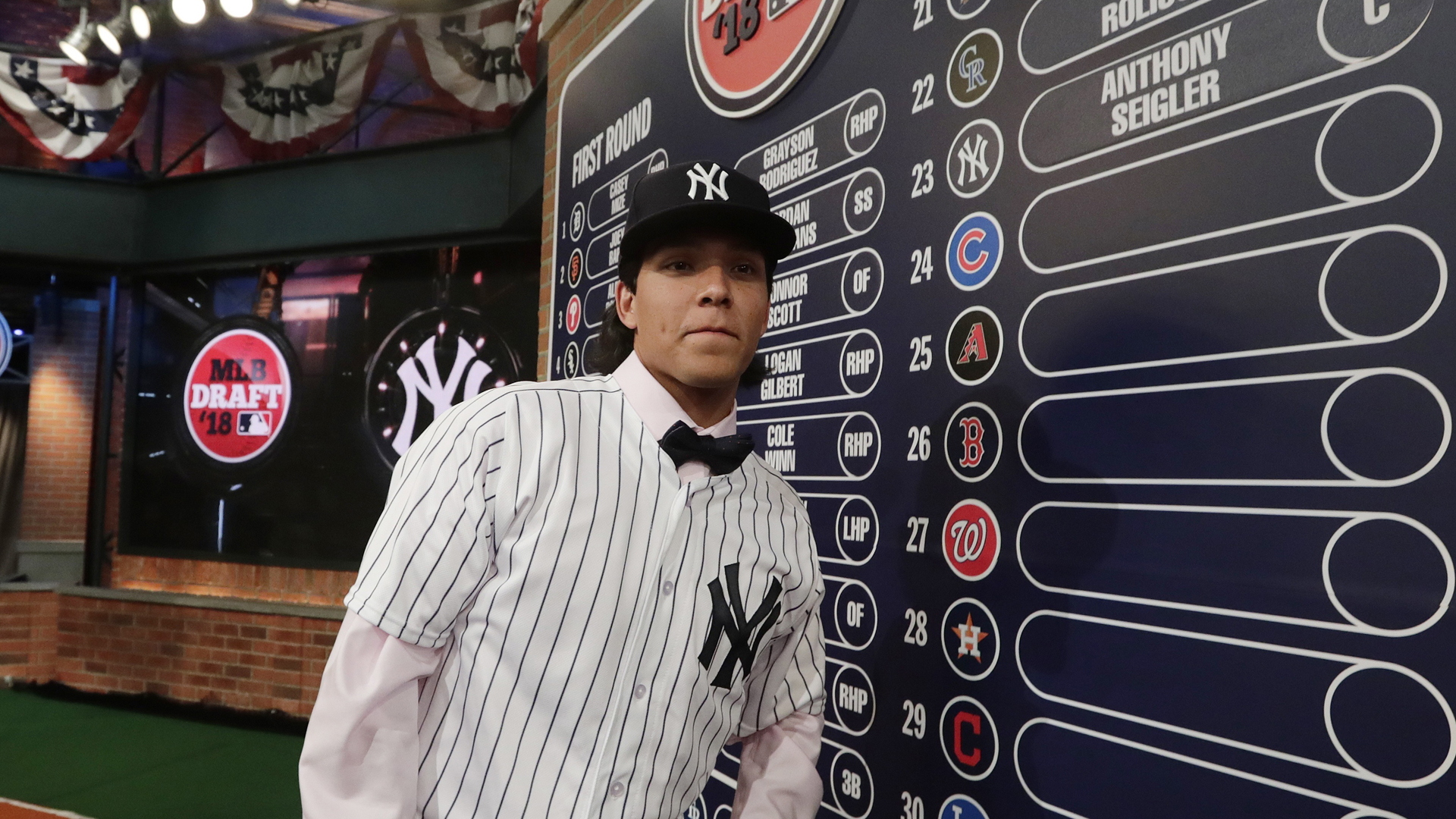 Anthony Seigler, a catcher from Cartersville High School in Georgia, reacts after being selected 23rd by the New York Yankees during the first round of the Major League Baseball draft Monday, June 4, 2018, in Secaucus, N.J. (AP Photo/Frank Franklin II)

The 2018 MLB First-Year Player Draft is now behind the New York Yankees organization. While it will be tough to evaluate the results of this draft class for the next few seasons, the Yankees had to be creative with their draft since they had one of the lowest bonus pools in all of baseball (26th).

If there was one main theme to take away from the draft, it is the fact that the Yankees were aiming to try and fix their depth at the catcher position. Yes, the team has Gary Sanchez as its long-term catcher, but they needed more catching depth in the organization.

The team used seven of their 40 picks on catchers including their first two picks (Anthony Seigler in Round 1 and Josh Breaux in Round 2). This allows the Yankees to use that catching depth or try them out at other positions. For example, Bryant’s Mickey Gasper (27th Round selection) was drafted as a first baseman.

One of the things that you will notice from this draft is the Yankees only took two left-handed pitchers out of the 24 pitchers they selected. Those two were Charlotte’s Josh Maciejewski (10th Round) and Brady Allen from George Jenkins High School in Florida (39th Round).

Despite not taking many left-handers in this class, that could just mean that the organization liked the right-handed pitching depth compared to the lefties. In that draft, that can always vary from year-to-year.

For a lot of these players, the draft doesn’t necessarily start their professional careers. On Friday, the Super Regionals get underway as teams try to reach the upcoming College World Series in Omaha (Nebraska).

In total, the Yankees have five players left in the NCAA Tournament. Those players are North Carolina right-hander Rodney Hutchison Jr. (6th Round), Arkansas right-hander Barrett Loseke (17th Round), Tennessee Tech center fielder Alex Junior (18th Round) and right-hander Marcus Evey (20th Round), and Vanderbilt right-hander Justin Wilson (23th Round). If you haven’t seen these players in action yet, be sure to turn on the ESPN family of networks.

One player that caught my eye in this class was taken by the Yankees took in the 13th Round. Isaiah Pasteur was both a pitcher and an infielder at George Washington and was the Atlantic Ten Player of the Year after transferring from Indiana in 2016. He hit .331 with 11 home runs and 49 RBIs for the Colonials this past season.

Finally, it stood out that the Yankees waited till the 14th Round to draft an infielder that is not a catcher as they took West Virginia second baseman, Kyle Gray. From afar, the Yankees have a lot of depth in the upper tiers of their farm system in the middle infield. With that being the case, that organizational need was not as high compared to the catching position or adding more right-handed arms.

As most of these players get started on their professional careers, it is important to remember that they will all develop at their own pace. It will be fun to chronicle their journeys as they progress in professional baseball.