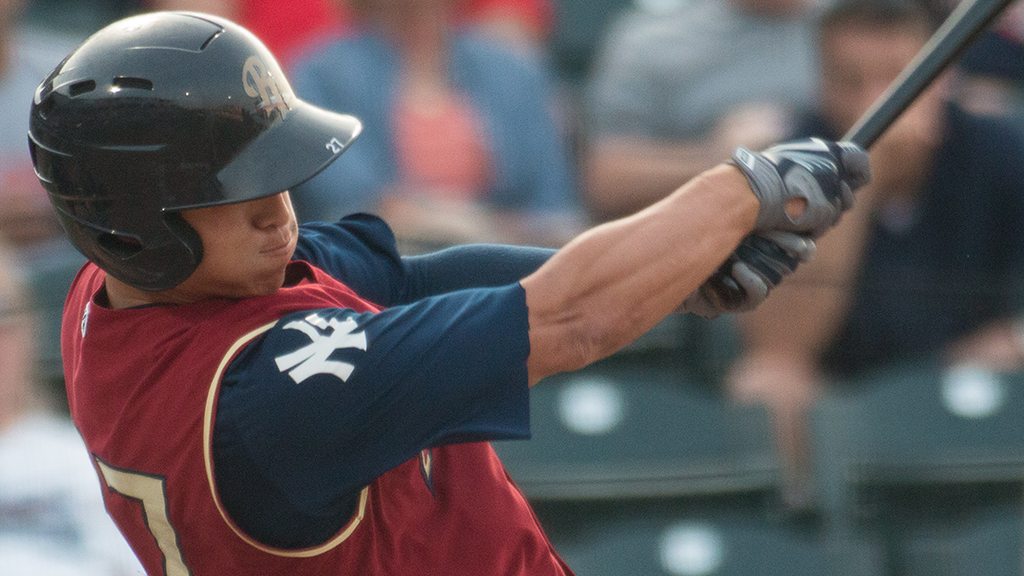 ROCHESTER, N.Y. – Without a hit through six innings, the Scranton/Wilkes-Barre RailRiders more than made up for it. Championed by crushed home runs from Rob Refsnyder and Aaron Judge, SWB sent all nine to the plate in a five-run seventh en route to a 5-3 series-opening win over the Rochester Red Wings (Minnesota Twins) at Frontier Field on Friday night. The RailRiders (69-52) have won a season-high-tying six straight games. Rochester (61-60) has lost four of five.

The Twins’ top-ranked pitching prospect, Jose Berrios, had allowed just one man to reach base through six innings. That all changed when Refsnyder bashed a no-doubt home run to left field to spark the seventh for a 2-1 score. It stalled a string of 17 straight men retired since Refsnyder was hit by a pitch in the first. It also ignited a run of seven straight clean baserunners including a majestic three-run homer by Judge for a 4-2 edge. IL All-Star Austin Romine rounded out the scoring with an RBI single to right that scored Slade Heathcott and chased Berrios (3-2).

SWB starter Brady Lail tossed a solid 5.2 innings of two-run ball, but it was reliever James Pazos (3-1) who earned the win. He stranded an inherited runner behind Lail and retired the lone man he faced, Xavier Avery, on a strikeout looking.

Rochester added a run in the eighth with an Avery single that plated Reynaldo Rodriguez.

But in the ninth, Cesar Vargas struck out the side in a perfect ninth for a save in his Triple-A debut. The game ended when he whiffed the man named baseball’s No. 1 prospect entering the season, Byron Buxton.

The RailRiders return to PNC Field for a six-game homestand on Tuesday, Aug. 18 as the Lehigh Valley IronPigs (Philadelphia Phillies) and Red Wings come to town. It starts with T-Shirt Tuesday presented by Norwegian Cruise Lines. The first 1,000 fans through the gates will receive a Mr. IncrediBall T-shirt.